Hypnotic Language and the Police 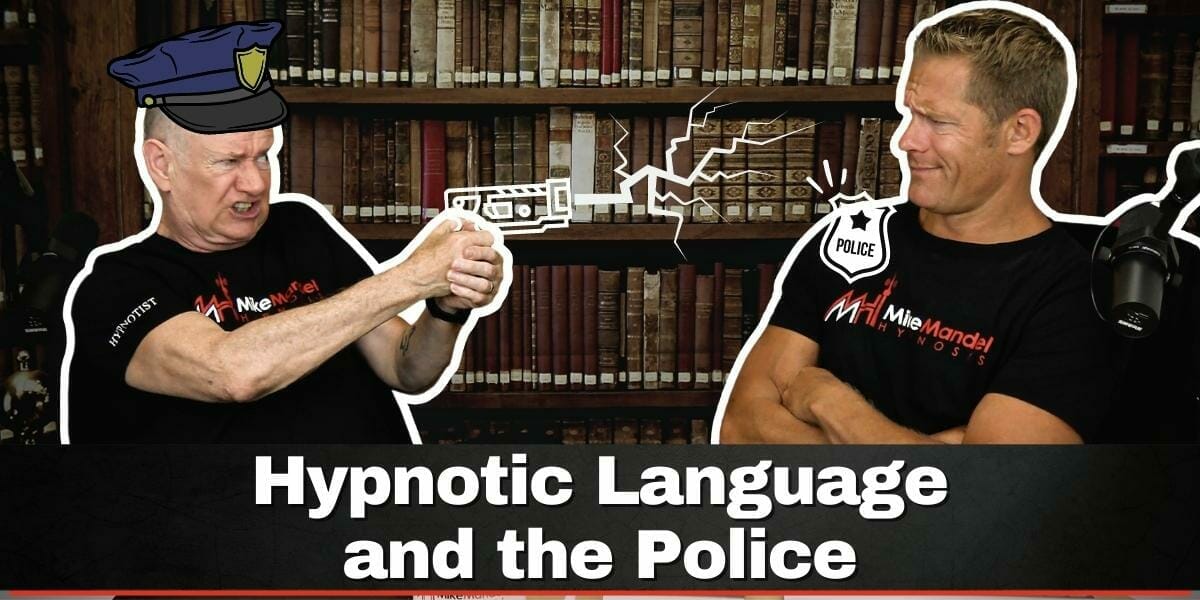 Do police use hypnotic language? They need to, as do all emergency services.

It can literally be the difference between life and death… That's because hypnotic language is the language of influence, and unless one knows what one is doing with their words, mistakes and missteps are certain to happen.

This article will unpack some of the best methods of hypnotic influence in emergency situations. Mike has more than 25 years of experience as a police trainer, and the techniques you'll learn are simple but extremely powerful and effective in the real world. We'll let Mike take it away from here.

The Video That Started This Discussion

Hey everyone! Mike here. About a week ago, a YouTube video was brought to my attention to review and comment on. The footage was from police body cameras. It showed the take-down of a suspect who had been going door to door in a residential neighborhood.

Apparently, the man in question was a law enforcement officer at the federal level, which made it interesting. What followed was a verbal confrontation that quickly escalated because the suspect refused to comply with police instructions.

Eventually, it all went off the rails and got quite nasty, but that's a different story altogether. In my opinion, both sides of the conflict made mistakes. The prevention of conflict and de-escalation is essential and would have happened if the suspect had followed police instructions.

Adrenaline Is a Game Changer

When someone is under stress, several physiological changes begin to occur—powerful chemicals like adrenaline and cortisol flood the bloodstream. Once there, they initiate the fight, flight, or freeze response.

In other words, you either attempt to fight for your life, run away, or stay still and do nothing, hoping the conflict will just disappear. But that's not all that happens.

Intense emotions affect the way we process language. That means, on a practical level, that once adrenaline gets triggered, we get physically stronger and more resistant to pain. Unfortunately, we also lose the ability to process complex language.

This is where it all becomes hypnotic.

How Can It Be Hypnosis?

When we say it is hypnotic, we don't mean formal, ritualistic hypnosis. (like you'd seen onstage or in a hypnotherapy session) Instead, we mean that certain aspects of hypnosis begin to function with no hypnotic induction at all.

Our friend and noted hypnotherapist Freddy Jacquin says, "Create an emotion, give a suggestion." The implication is that once emotions are triggered (the stronger, the better), we can give suggestions and expect them to work, just as if the person was in a hypnotic state (Read: Fear and Suggestibility – Why Emotions Make You Stupid).

So when someone is in a highly emotional state, it's good to presume they are currently more suggestible and will accept information without evaluating it. The emotion can be anger, fear, or even a state of shock!

So yes, even if it isn't actually hypnosis, it has much in common with it and is undoubtedly HYPNOTIC.

And that's why police and other emergency services must be cautious with their language.

In a highly stressful situation, our ability to process language becomes derailed. Complex language and abstract concepts are just too much for a brain to handle when it's in survival mode.

For that reason, in emergencies and when people are highly emotionally aroused, we must simplify what we say and be highly directive and congruent. Simply put, your words matter whether the other person is filled with rage or experiencing extreme grief.

Here are a couple of examples to make the point:

In this somewhat exaggerated (but not unlikely) example, the first instruction is so long and complex, with so many preparatory and pre-framing statements, it borders on the ludicrous. It's way too long and involved for a person under stress to comply with it.

On the other hand, the second example is direct, to the point, and gets the job done. Note the simplicity of language and how the subject quickly knows WHAT TO DO to comply.

The human brain tends to process negatives by deleting them. If you're told not to think of something, you must first think of it to process the words. Then you can delete it. But when we say to a person exactly what to do using positive words, there is no second step of deletion.

By keeping our language simple and positive, we minimize the likelihood of escalating things and primarily keep adrenaline out of the equation.

A final point is a neurological one. Inside your brain is a superhighway of nerves connecting the pons, the geniculate body, and the occiput. When we are suddenly startled or experience shock, these three areas of the brain swing into action. The result is the brain going into survival mode.

During this survival mode response, our brains seek normalcy, and we are often highly prone to suggestion. If we know this is likely to happen, we can use it positively, as in the case of a female police constable I had trained.

She was the first officer on the scene of a fatal car crash. The vehicle had hit black ice in a snowstorm, left the highway, and slammed into a rock wall.

She explained that the passenger had not been wearing a seatbelt and was dead at the scene. The driver had a compound fracture of his right leg, leaking blood from a severed femoral artery.

As she put her thumb in the artery to stop the bleeding, the driver noticed that the passenger was dead. Panic began consuming the driver, who started screaming that he would lose his leg and never walk again.

Realizing he was experiencing a PGO spike and was shocked, the constable remembered to tell him what to do in simple and positive language. Although the temptation was to yell DON'T PANIC, she firmly told him to REMAIN CALM instead.

She said the result was magical. The driver took a couple of deep breaths and said, "Okay…"

She continued giving him reassuring suggestions, keeping his attention off the passenger and telling him that he would be fine and that the ambulance was on the way.

In Summary: How To Use Hypnotic Language Better?

Our language affects other people, especially when high emotions or stress kick in. We must remember to keep our language simple, positive, and direct, focusing on the outcome. If you ignore this advice, you'll find it challenging to de-escalate conflict or calm things down.

Remember that in emergency situations, people seldom operate at the peak of their intelligence. By using these and other language techniques, you can go a long way to helping people return to a normal frame of mind.

And this applies not just to emergency personnel but to everyone, whether in a life-threatening event or a family argument.

For a more in-depth notion of how to use these language patterns, as well as many other hypnosis techniques, check out the Mike Mandel Hypnosis Academy.