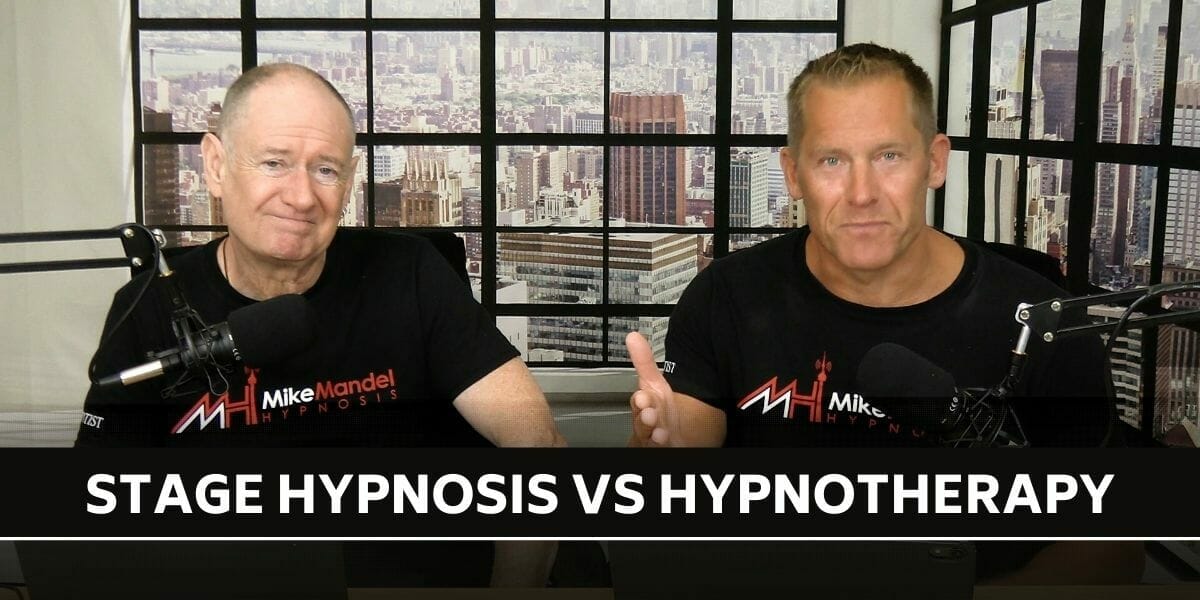 Before we proceed, if stage hypnosis is something you want to get really good at, watch the video below to hear what we have to say about our friend Michael C. Anthony's expert training.

When someone says “hypnosis”, there are two typical responses. The average person will either think of a stage performance, where volunteers do hilarious antics, or someone who goes to a hypnotherapist to quit smoking.

These are stereotypical images, but they aren’t too far from the truth, although hypnotherapists do much more than merely help someone give up cigarettes.

A professional hypnotist, whether he or she is an entertainer or a therapist, uses many of the same methods to get results. That’s because both styles of hypnosis require similar skills, including induction, trance deepening, etc.

Even though the foundations are the same, the approach to hypnosis, and the methods used, will largely be based on the outcome the hypnotist is aiming at.

For example, the stage performer must be first and foremost an entertainer. His show must be interesting, which necessitates a fast pace. A hypnotic entertainer will likely use rapid inductions to avoid boring the audience. Nothing will put your audience to sleep faster than watching the hypnotist perform a progressive muscle relaxation (PMR) induction.

A hypnotherapist, on the other hand, may specialize in slower, more feeling based inductions. There will likely be lots of mention of sleep and relaxation, and without an audience, there’s no need to be entertaining at all. People who book hypnotherapy sessions will typically expect to be very relaxed, and a good hypnotherapist will ensure that’s what happens.

Differences aside, there are some key areas where there is a big overlap between stage hypnosis and hypnotherapy.

The Underlying Hypnotic Principle of Heteroaction

One of these overlaps is the use of the principle of heteroaction; a term coined by Dr Andre Weitzenhoffer in 1957. Heteroaction basically states that as soon as a subject responds to a suggestion, it increases the likelihood that he will respond to a different and more difficult suggestion.

Stage hypnotists use heteroaction all the time.

A show might begin with a dozen subjects being asked to interlace their fingers and squeeze their hands together. The hypnotist will then give suggestions that their hands are locking and cannot be separated. Since this depends on leverage, it’s likely to work on most of the volunteers, and the “bad subjects” who get their hands apart are sent back to the audience.

The stage hypnotist will now move rapidly to another suggestibility test, and because of heteroaction, it’s more liable to succeed. By continuing in this way, the hypnotist is able to build positive momentum toward all of the following suggestions.

The Amazing Kreskin uses the creation of heteroaction instead of a formal induction, as does our friend and colleague, James Tripp.

By moving from one suggestion to another and maintaining momentum, the subject can be taken all the way to experiencing hallucinations or even forgetting his own name; such is the power of heteroaction!

The hypnotherapist can learn much from the stage performer, who typically possesses a lot of skills to move rapidly into deep trance phenomena, as he whittles down his group of volunteers to those who will provide the most entertaining show. After all, entertainment is the entire point.

Hypnotherapists are Teachers Too

A stage hypnotist is an entertainer and a hypnotist. But a hypnotherapist doubles as a teacher.

The stage performer plays the odds. He starts with a large group of volunteers; often twenty or more. This ensures he’ll have enough people left onstage to create a memorable show, even after weeding out those he cannot work with.

The hypnotherapist doesn’t have the luxury of sending his clients back, until he finds one he can work with!

Instead, in order to help the client make changes, what he’s doing has to work. If he’s unable to get his clients into trance and work with their issues, his career as a hypnotherapist will be very short.

Once again, heteroaction comes in, this time in the form of what are known as yes sets and compliance sets.

By asking the client questions that require a yes answer, or at least agreement, heteroaction and positive momentum are created. That’s because answering the yes question increases the probability of the client answering subsequent questions by saying yes.

Once this is accomplished, the hypnotherapist can move to a compliance set, by giving the subject instructions that are obeyed without questioning them. This might be as simple as telling the subject to take a deep breath, relax his neck, and close his eyes.

By following these simple instructions, the hypnotherapist creates heteroaction and directs the subject into a trance. The hypnotherapist can spend time teaching his client how to fully participate and engage in the session.

Although a hypnotherapy session is not a show, a good therapist can often be a bit theatrical with a client if the situation warrants it, because it will meet some clients’ expectations. It’s here that the stage performer can teach the hypnotherapist to create phenomena that will bring an element of curiosity to the session.

There are many other principles that apply across the board to both styles of hypnosis, one of these is: Ecology first.

The stage hypnotist must make sure there is no physical danger to his subjects, and he must always send them back to the audience with all entertainment suggestions removed, and his subjects happy, healthy and completely normal again.

The hypnotherapist practices good ecology by never treating anything beyond his or her ability and skill level, and never diagnosing or prescribing anything. Like the stage performer, a reputable hypnotherapist will always remove all trance residue, so the client is safe to go home.

they can learn much from each other.

Are you interested in learning the skills that will make you amazing at both stage hypnosis AND hypnotherapy? The Mike Mandel Hypnosis Academy is our flagship online hypnosis training. Get your 14-day FREE trial here.