Fear and Suggestibility – Why Emotions Make You Stupid 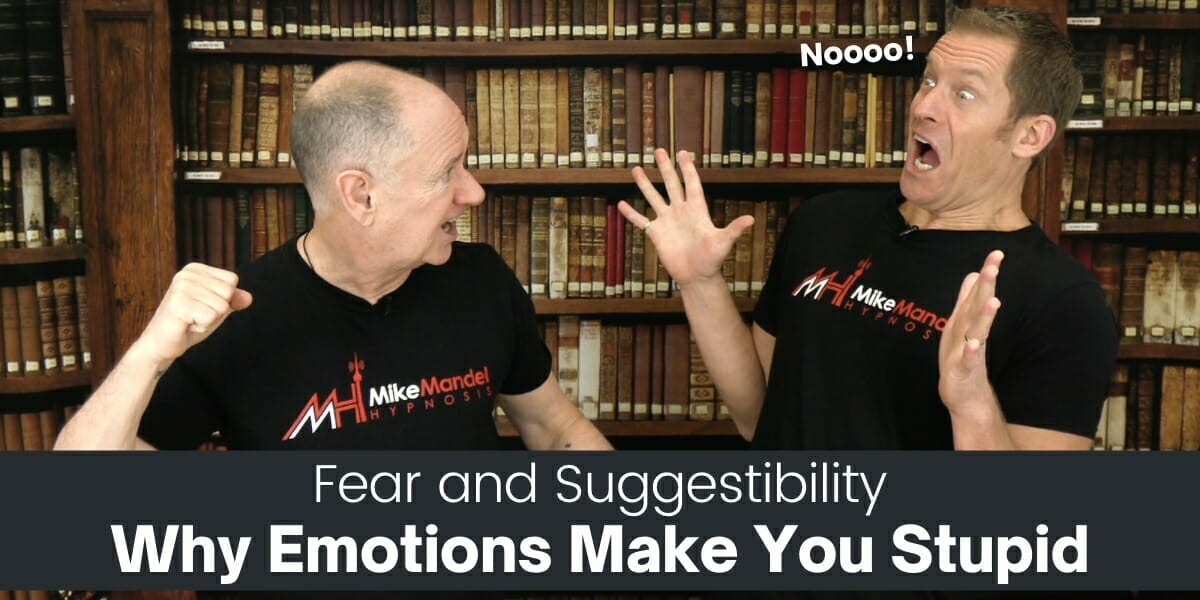 Have you ever noticed how people tend to throw reason away and act irrationally when they're under intense emotional distress? As you can probably guess, that can be a real issue sometimes. With this blog post, we hope to explain how that happens and how to cope with it.

In hypnosis, we use the critical faculty model to understand how suggestibility works. It doesn’t actually exist, but it’s a working model that has proved itself as one of the most useful so far.

As the firewall of your mind, the critical faculty prevents suggestions from getting in based on whether it’s useful for or somehow beneficial to you. At least that’s how it’s supposed to work.

The truth is sometimes suggestions that do us more harm than good are taken in, whereas more desirable ones are left out. This isn’t the rule of thumb. Most of the time, the critical faculty works fine. But because it receives so many suggestions and information inputs every day, we’re vulnerable to it making occasional (and costly) mistakes.

All it takes for a mean comment to go flying past the critical faculty directly into the unconscious mind is for it to be made by a figure of authority. Needless to say, these suggestions are neither useful nor beneficial to anybody; yet they’re accepted as fact.

So be mindful of what kind of suggestions you’re giving other people. What may seem like an innocent comment to you might have devastating effects on another person’s mental health, especially if they’re predisposed to believe what you’re saying.

If, for example, your son comes home from school with low grades to show you; think very deeply on how you’ll address this problem with him. Calling him stupid and things of the sort is likely to have disastrous consequences in the future. Despite your good intentions, nothing good can come out of such behavior.

But what does any of this have to do with fear?

The notion that the more emotional you are, the less clearly you tend to think about things is, in truth, very much accurate. Every emotion has the potential to cloud one’s judgment and cause him to make irrational decisions, but one emotion in particular is exceptionally good at that. We’re obviously talking about fear.

The primitive response of fight or flight is activated when your unconscious mind perceives an imminent threat. It was especially important for our survival in prehistoric times, but it’s still very much present in everyone’s behavior. We simply haven’t had enough time yet for our brains to adapt to a civilized way of living. Therefore, we still work as though we were living in a Savannah, where predators could jump from the bushes at our throats at any given time.

To protect ourselves in these life threatening situations, our nervous system activates the fight or flight response as an emergency protocol. It shuts down every bodily function that isn’t absolutely essential at the moment (such as critical thinking) in order to turn on a highly efficient “survival mode”.

You may recall at some point in your life how you felt your heart pumping in your chest as you started to sweat after being startled by something. That happened because your brain activated a threat response after detecting something it perceived as a potential threat.

Because it’s so difficult to think straight when in these heavily stressful situations, the ability to calm yourself down and reestablish a clear state of mind is such a valuable skill to develop.

With the newly acquired awareness of how you tend to make rash decisions (or become more ‘stupid’) when under strong emotions, especially fear, we hope for you to be able to, more easily avoid emotional manipulation.

Fortunately, dealing with this kind of toxic behavior is fairly simple: avoid these people, if you can. The fewer of them you have in your life, the better. If that’s not possible, be aware of what they’re trying to do and don’t give into their manipulation.

If it’s emotions they’re trying to drag out of you, don’t give it to them! Remain rational and composed. Think logically all the time and dismiss any attempts of throwing you off balance. You are in control of your emotions, not them. You have that right. Use it.

The Danger of Irresponsible Leadership

As we previously mentioned, a well-known guideline of human behavior dictates that a figure of authority tends to be obeyed without question. Their suggestions will easily bypass the critical faculty and affect a person’s behavior at an unconscious level.

Take a moment to think about the implications of this. As a leader, you’re entrusted with your subordinate’s best judgment. All of their decisions and its ultimate consequences become your responsibility. Should you wish to lead people; be it at work, home, or anywhere else; you must always have their best interest and well-being at heart. If you dismiss or otherwise neglect this responsibility, you’ll be the only (rightfully) held accountable.

With this, we don’t mean to cause fear or to be as manipulative as we described some people do every so often. Instead, we mean to make you aware of how emotions impact our behavior and show you how, from our perspective as hypnosis trainers and therapists, we can work around these dangers and do the best we can for ourselves and the people around us.

Since you're reading this, you're certainly interested in learning things that can help you grow and improve as a person. You're also eager to learn new behaviors that will help you live a better life. That means our Personal Growth Membership is the perfect fit for you.

The Personal Growth Membership is the ultimate collection of courses for personal development and self improvement. For one low price, you'll gain access to a full library of materials designed to optimize your abilities and boost you towards a more awesome and fulfilling life experience.