CBT vs. Hypnotherapy: Which Is Better? 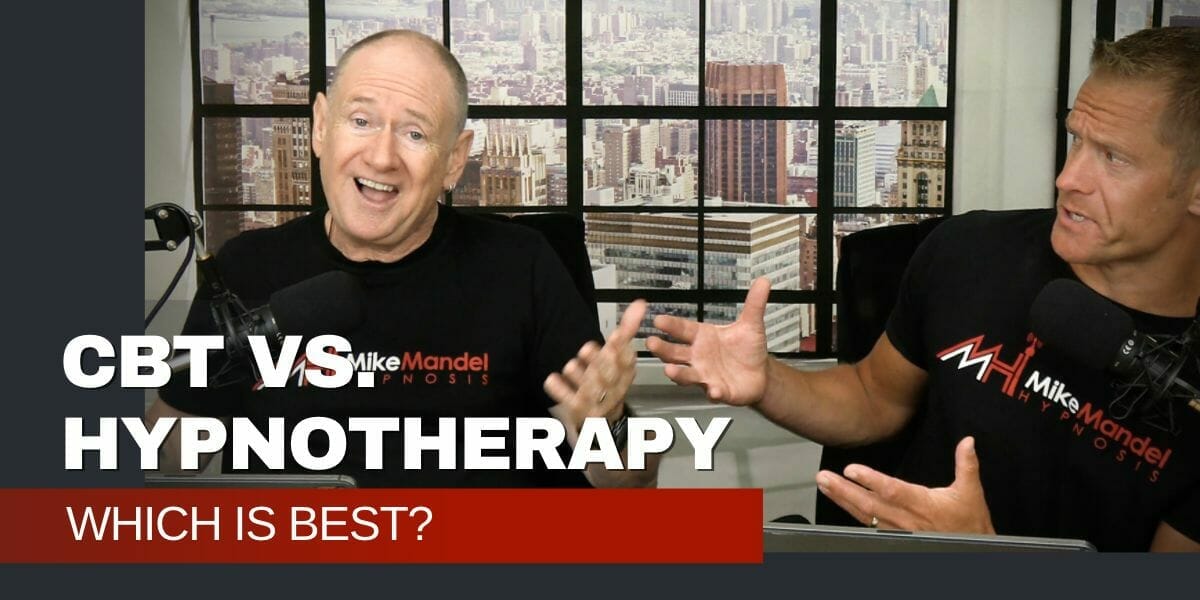 Cognitive behavioral therapy (CBT) seems to be all the rage these days. But is it really the best modality of therapy out there? How does it compare to hypnosis or hypnotherapy?

Should a person who studied hypnotherapy add CBT skills to their therapy toolbox? Or should CBT therapists study hypnotherapy?

That’s what we hope to answer in this article. Sit back, grab a coffee and enjoy. But let me give you a spoiler alert: We’re supportive of all useful modalities.

This article was written based on a Youtube video on the same subject. It's one of our most informative and well-researched videos. Watch it below, then come back here to read the rest of the article:

What exactly is Cognitive Behavioral Therapy?

CBT is a psychological treatment based, in part, on changing “faulty or unhelpful ways of thinking”, according to the American Psychological Association.

Therapists who use CBT recognize that a client’s psychological problems are often caused by thinking patterns. These patterns are often learned and engrained over time.

CBT treatment seeks to teach a client how to recognize and then change those thinking  patterns. Some examples of unhelpful or negative thinking might include:

As the name implies, there are two components to CBT.

“Cognitive” relates to cognition, which relates to the various conscious thought processes that occur in a person's head at any given time. And “behaviour” obviously relates to how a person acts in any given situation. It's worth noting that any thought process can also be considered a behaviour.

So it makes sense that Cognitive Behavioral Therapy is all about identifying thoughts, consciously altering those thoughts, and practising new behaviours so they'll eventually become automatic. This is all done over a period of time, and often in baby steps so that a person can make positive changes in life.

At the risk of oversimplifying, let’s say that hypnotherapy happens when a hypnotist puts a client into a hypnotic trance and activates the unconscious mind to find resources to solve a problem.

We’re not going to turn this article into a “how to do hypnotherapy” training session. We already have loads of content about that. But suffice to say that, with hypnosis, the therapist is mainly thinking about how the client automatically responds to situations.

A hypnotherapist has a toolbox of methods such as:

A hypnotherapist, or hypnotist, is mostly concerned with changing how a person’s unconscious mind automatically acts.

What the heck does that mean?  Allow me to explain …

Your unconscious mind acts much faster than your conscious mind. It runs most of the processes in your body and automatically reacts to things. Think about how quickly you’ll pull your hand away from a hot pan, or how immediately you’ll jump back from the road if an oncoming car honks its horn at you.

Those are unconscious responses.

In much the same way, your complex brain reacts to certain triggers by firing entrenched neural pathways that lead to specific reactions.

Maybe seeing a snake causes a phobic response. Or maybe seeing your boss causes extreme self consciousness or anxiety. Some people get sweaty and uncomfortable when they know they have to give a presentation.

A skilled hypnotherapist will light up the circuits in the brain that cause these problems (we call this getting that problem state “executive”), and then use hypnosis to change how the brain reacts, thereby creating new neural pathways.

CBT does this too, but it does so in an indirect way. CBT affects the unconscious through systematic and sometimes exhaustive conscious repetitions of new, more desirable thought patterns and behaviours, which tend to become automatic over time.

As hypnosis deals directly with the unconscious mind instead, it tends to achieve much faster results, as it can make the necessary changes without having to go through the lengthy process of trying to consciously deal with the symptom first.

CBT and Hypnotherapy Have Some Common Ground

Even though these two therapeutic modalities are very different, they do share some common ground.

Both use the SUDs scale. This means “Subjective units of distress”, and refers to the zero to ten scale on which a therapist will ask a client to rate a problem.  How bad do you feel when you think about snakes? How uncomfortable do you get when you have to make a presentation at work?

By rating things on a scale from zero to ten it helps the therapist know how bad the problem is before and after the therapy.

Both focus on the relationship with the therapist. This is a no-brainer because whatever method of therapy is used, the rapport between the client and the therapist is of the utmost importance.  In hypnosis we say “rapport is the glue that holds trance together”. But the same is true in CBT, where rapport is critical to the client trusting the process and carrying out the homework.

Both focus on changing the brain. Hypnosis and cognitive behavioral therapy both change neural pathways in a person’s brain. If the therapy is successful, it’s successful because it changes how a person unconsciously thinks, feels and/or behaves.

How are CBT and Hypnotherapy Different?

Now that you understand how hypnosis overlaps with cognitive behavioral therapy, let’s look at where they differ.

CBT doesn’t deal directly with the unconscious. Cognitive behavioral therapy intervenes based on cognition, which is purely conscious, and the therapist focuses on asking the client to make behavioral changes consciously. This is why CBT will typically take longer. Changes that start consciously can become new, unconscious patterns over time.

CBT can result in coping with a problem. The typical CBT therapist wants to help a client take a bad problem and transform it into something less bad.  Anxious in social situations? Let’s reduce that feeling or learn how to cope with it so it feels less bad. With hypnosis, a skilled practitioner is actually looking to take that social anxiety, zero it, and then build something positive on top. If we completely crush social anxiety, we’ll probably help the client feel much more confident and have an awesome level of self-esteem to boot!

Hypnosis can fix many problems in one session. With hypnosis, we’re often able to uncover the true (unconscious) root of the problem very quickly. If we stick only to a conscious intervention like CBT, then we may only be guessing at the cause of a problem, and it often takes a lot more time & effort to fix it.

We may be biased because we teach hypnosis and NLP. But that never stops us from preaching one consistent message: Become flexible and skilled in a wide variety of methods. Build up your knowledge and take quality training.

If CBT grabs your interest, go learn it and put it in your therapist toolbox. Use it in conjunction with hypnosis and hypnotherapy. Doing so will give you more opportunity to help people, not less.

Some clients will prefer to start out with a conscious-based discussion of their problem. This might feel a lot more like a CBT session than a hypnotherapy session. But once you have strong rapport with the client, you may find they are easily open to the idea of doing a guided meditation, or doing a timeline exercise, for example.

To ignore either hypnosis or CBT would be a mistake. Both have their pros and cons, both are evidence-based modalities of change and both are perfectly compatible.

The more you learn, the more flexible you’ll become as a therapist.

And the more flexible you become, the more you’ll be able to help people change.