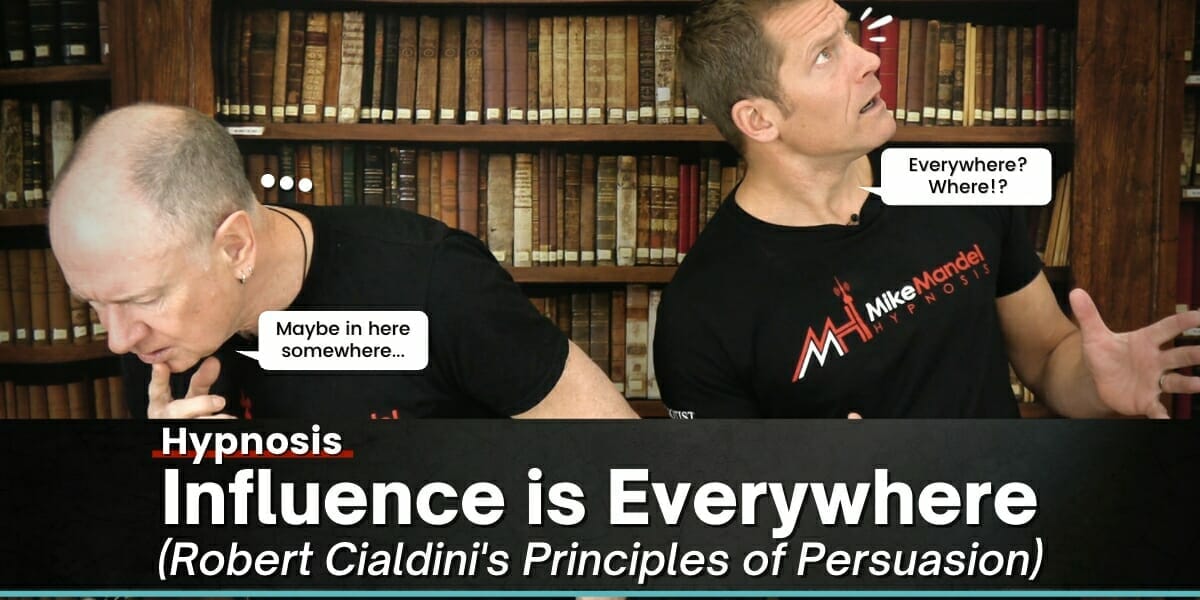 It’s not an easy task to define what exactly hypnosis is, but a useful way of seeing it is as an exquisite and highly effective form of communication. That frame indicates that hypnosis is very closely related to influence and persuasion. Indeed, both skills have similar goals and rely on many of the same mechanisms as the other.

Then it’s no coincidence that hypnosis is often misunderstood as some kind of mind control technique. Some people seem to believe that a person who knows hypnosis should be capable of making any person do or think whatever they wish.

While it’s true that hypnosis techniques map across to the field of influence and persuasive communication, it doesn’t make you a jedi. Similarly, techniques known to clever salespeople who can swiftly convince others to purchase their products can be helpful in hypnosis, too.

There’s No Such Thing as Hypnosis

If you’re a professional hypnotist, don’t get angry just yet. You’ll understand in a moment.

The reason hypnosis is so difficult to define is it’s very difficult to distinguish it from everyday life experiences we all go through. It’s been said hypnosis is a form of communication, but that’s surely not all there is to it.

We often say to our clients they’ve been hypnotized thousands of times in the past, like every time they watched TV or when they drive a car. Simply put, whenever your attention is so intently focused on one thing that you “zone out” and forget about everything else, you’re in hypnosis. Which is true, in a sense.

“Laser-focused attention” can be a definition of hypnosis, as can “highly effective communication”. Many other definitions work just as well, too. Come to think of it, hypnosis is actually just a working model. It’s a cool word we came up with to define ordinary processes that happen in our minds and in everyday communication.

When we’re purposely doing “hypnosis”, we’re able to create amazing and mind-boggling phenomena that rarely happen in other situations, but the underlying core principles that create these experiences are the very same that govern our everyday life interactions.

Robert B. Cialdini's 6 Principles of Persuasion for Hypnotists

Surely, you can now see why hypnosis can’t be some infallible evil mind-bending control tool that can be used to get someone to obey you without question. When you come to understand hypnosis as simply a special form of communication, you see it as no different than an ordinary process of convincing and persuasion.

If that’s true, then learning hypnosis can indirectly help you in the influence department. That's no surprise. We’d already established that.. But what few people realize is the opposite is also true: persuasion principles and techniques can (and should) be a huge asset in formal hypnosis settings.

In a previous article, 10 Non-Hypnosis Books Every Hypnotist Should Read, we cited Influence: The Psychology of Persuasion as one of the most important reads for anyone who wishes to become more influential. That should be everyone, but for reasons aforementioned, professional hypnotists are especially compelled to learn what Dr. Cialdini has to teach.

Let’s dive into some of his principles of persuasion and explore how they apply in a formal hypnosis setting.

The first one is somewhat predictable, but that’s only because it’s extremely important. We’re obviously more willing to accept suggestions and direction from a person we like. In his book, Dr. Cialdini goes on to explain the psychological principles behind how we develop affection for other people and how a person who’s aware of these principles can use them to develop amicable relationships more easily.

In the world of hypnosis, we have a word for that. It’s called rapport. It’s one of, if not the most important component of a successful therapeutic setting. Without rapport, it’s nearly impossible to achieve any results with hypnotherapy. This is true even if there isn’t any formal hypnosis being induced. A client must like the therapist and feel that he or she has their best interest at heart for the therapy to work. Otherwise, it’s just a waste of time for both parties.

We’re not going to spend a lot of time talking about this as it’s more related to sales and marketing than to hypnotherapy, but it must be pointed out as one of the most powerful principles of persuasion.

If you think you have a limited amount of access to something, you’ll naturally want it more. The prospect of not being able to get enough of something is often all it takes to convince you to go after it. That’s what happens when you feel more compelled to buy something if it has a sign on it that says “50% off until Saturday only” or something to that effect.

The rule of reciprocity is widespread across all human cultures and civilizations. It states that if someone gives us something or does us a favor, we should endeavor to pay it back somehow. Any favor, even when unrequested, can create this sense of obligation.

Remember the rule of reciprocity next time you’re offered a “free” sample of something at the supermarket. While it may not cost you any money, it’s certain to make you feel compelled to purchase the product even if you don’t like it. Very few people can simply accept a gift (in this case, a free sample) and leave without returning the favor.

Another pretty simple one.

Social proof is the notion that if a lot of people (especially your peers) are doing something, you’re more likely to do it, too. If you’ve ever had your teenage son or daughter argue that they should be allowed to go to a party because “everyone else is going”, you can understand what social proof is about.

That’s the reason why it’s so important, when you’re a beginner hypnotist, to practice with people outside of your usual social circle. (Read: Should You Practice Hypnosis With Friends and Family?)

FInally, commitment and consistency, the last principle of persuasion according to Robert B. Cialdini, is represented in hypnosis as heteroaction. The principle of heteroaction, described by Dr. André Weitzenhoffer in 1957, is the principle behind Yes Sets and Compliance Sets as well as Suggestibility Tests.

As we explain in this youtube video, when someone starts agreeing with you and complying with your suggestions, they’re more likely to carry on doing so, even if you ask them to do completely unrelated things. By getting a person to agree with a simple instruction or suggestion, you start building momentum towards more difficult hypnotic phenomena.

It’s actually possible to get someone to have a hallucination in hypnosis if you simply build this momentum towards it with increasingly complex suggestions. You start with simple instructions like “sit up straight” and “close your eyes”, and move up the ladder until you reach the most amazing hypnotic experiences.

To really understand all about heteroaction and how it works, read The Ultimate Guide to Hypnotic Suggestibility Tests.

How To Become a Persuasive Hypnotist

In addition to Cialdini’s principles, a hypnotist has several other available tools that can make him outstandingly persuasive and effective in hypnotherapy. Clean Language is just one great example of how one can use communication skills to boost a therapy session’s results. Others could be the Meta Model and the Milton Model.

(Read: Become a Master of Communication Using The Three Language Models From Hypnosis and NLP).

Luckily, you now have a chance to be a part of the greatest online hypnosis school in the world. At the Mike Mandel Hypnosis Academy, we teach hundreds of hypnosis principles that you can use in client sessions as well as in everyday life.

Whether you’re just a beginner or already an experienced hypnotist, our core 24 lesson modules are designed to take your hypnosis abilities to the next level.

Click here to get a 14-day FREE trial at MMHA.