Should You Practice Hypnosis With Friends and Family? 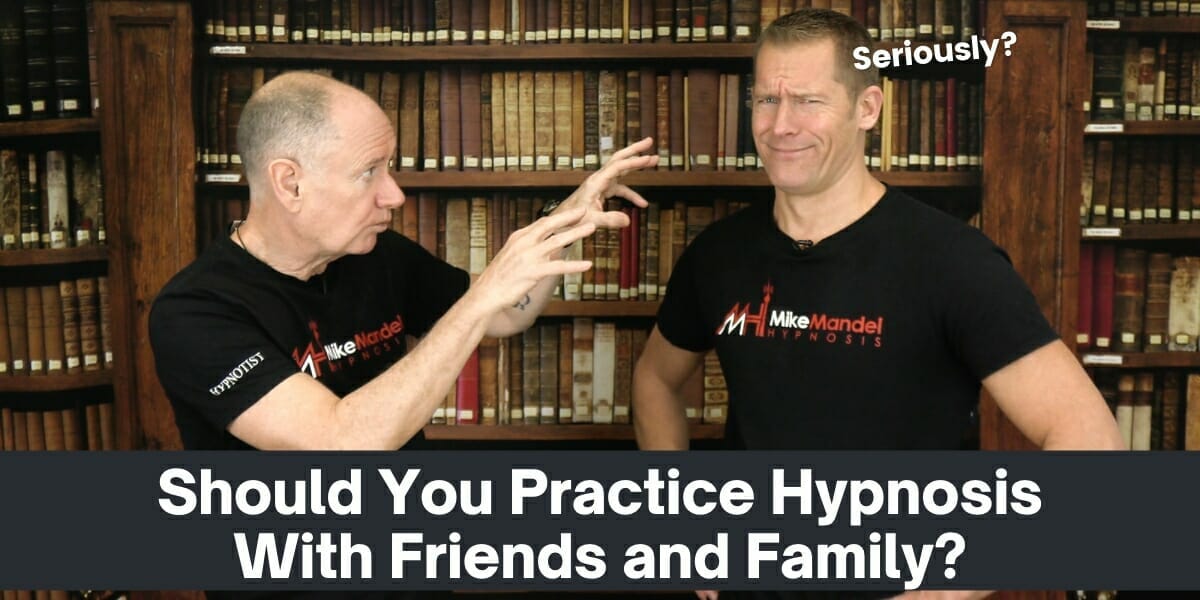 Among the various schools of hypnosis (including direct suggestion-based hypnotherapy, the more conversational Ericksonian hypnosis, and even street and stage hypnotists), it’s common sense that one of the keys to mastering hypnosis is practice.

Granted, practicing hypnosis is not the simplest thing in the world. You need subjects who are willing to let you practice on them, as well as a willingness to make mistakes. It can be a real breakthrough if you had previously been held back by shyness and social anxiety. But who should you practice with?

We believe hypnosis should be learned by mastering its core principles, not by fixed rules or scripts. To make an educated decision on who you’ll ask to be your subject, you must understand the communication principles that make hypnosis work. The idea is you must be able to replicate those conditions as best as you can to be able to hypnotize someone.

To answer the question in the title: yes, it’s fine to practice with friends and family; but you must be aware of the implications of that situation for doing good hypnosis. The reason people often recommend you don’t start with your closest acquaintances is because of one of the key factors that makes hypnosis work.

Rapport and Prestige - The Building Blocks of Hypnosis

Hypnosis - hypnotic states and phenomena - is maintained by a handful of circumstances which can be summarized in two key elements: rapport and authority or prestige.

As far as rapport goes, it suffices to say you most likely won’t be able to hypnotize a person who has a bad impression of you. If they don’t like you, they won’t trust you; and without trust, it’s nearly impossible to hypnotize someone. To learn how to create intense and genuine rapport, you can read the blog post we wrote about it by clicking here.

Use Prestige to Create Expectancy

Other hypnosis instructors will call this authority. That 's okay. It’s one way to see things. But prestige is what it really is.

Seeing someone as an authority evokes a sense of dominance and imposing your will on other people. That can be a very powerful frame if you can portray it correctly, but it can also be a rapport breaker. Too much authority often makes hypnosis unachievable by generating an insuperable amount of resistance.

People don’t like being high-handedly told what to do, and neither are they willing to hand over their free will to somebody else. If instead, your aim is to create prestige; you’ll be regarded as a figure of experience and expertise without breaking rapport with your subjects or freaking them out.

But what is prestige?

In short, it’s when people sense that you’re an expert in that particular area; in this case, hypnosis. You come off as someone who knows what they’re doing and readily gets people excited, wanting to be hypnotized. You are able to generate expectancy.

Much of hypnosis can be defined as the ability to set up high expectations in people about what they can do with their minds, and fulfilling them. To engage the subject’s mind in the process, they must actually expect something to happen, therefore you must have prestige. That’s the problem with practicing hypnosis with friends and family.

You see, those people usually won’t take you seriously. They know you’ve just started studying hypnosis and don’t have a ton of experience. You may have prestige in their eyes for a lot of things, but not (yet) for hypnosis. That’s why it’s so difficult to start practicing with family members and close friends.

We don’t mean to say you’re bound to fail should you attempt to hypnotize them. Among our students, many have reported success while practicing the techniques that we teach on their close relatives. Generally speaking though, because you don’t have a lot of credibility in people’s eyes when you start doing hypnosis (and people close to you know you’re just beginning), it’ll be tough to get their expectancy up.

Nonetheless, if you feel confident you can zone your family through the floor on your very first try, go ahead and do it! That kind of confidence is what makes your vocal tone, body language, and overall nonverbal communication congruent, which adds to your prestige. Just don’t be upset if it doesn’t exactly go the way you intended.

By having these principles in mind, you will know exactly who are the people you’ll usually be able to hypnotize and who are the ones you’d better pass up for the time being. As you can see, the principles don’t apply only to the people who are close to you, but to everyone else as well.

Aim to get volunteers with whom you can build strong rapport and that see you with prestige. Know your value. Don’t insist on trying to convince people that you can hypnotize them, much less attempt to hypnotize someone who isn’t taking you seriously and is just looking for an opportunity to make fun of you.

Once you have a decent amount of practice, you’re likely to establish yourself among your friends and family as a genuine hypnotist. You’ll build prestige by steadily gaining experience and showing them you’re good at this.

To really get good at this, though; you’ll need good quality training in addition to practice. For that, the Mike Mandel Hypnosis Academy is the perfect pick. Over here, you’ll discover all about hypnosis from beginner to more advanced levels. If you study the material and do the exercises as we suggest, you’ll naturally become a fabulous hypnotist.

Get a 14-day free trial at the Mike Mandel Hypnosis Academy by clicking here.