NLP – How to Overcome Resistance With Spacial Anchoring

NLP – How to Overcome Resistance With Spacial Anchoring 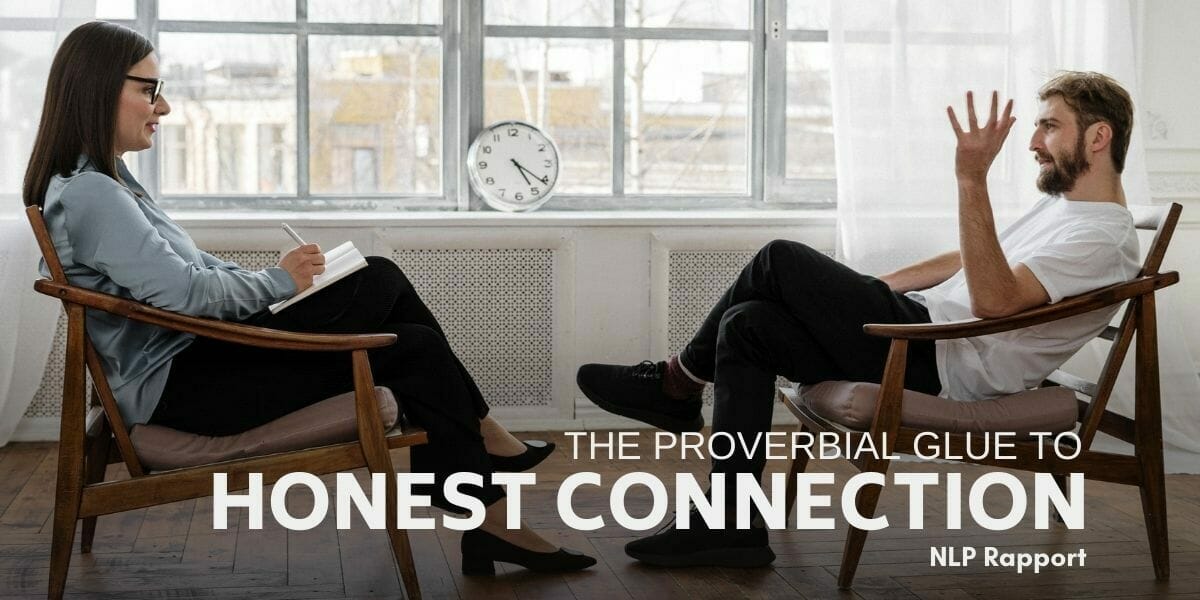 Have you ever been in a situation where it seemed like no matter what, the person you were talking to just wasn't listening?

Or have you ever been on the opposite side, where you felt as though you couldn’t connect with what someone was talking about?

Sure, it’s one thing to daydream in the middle of a conversation when you are listening to your dull-toned Aunt Edna tell you about her failed oatmeal raisin cookie recipe... (sorry Auntie E!)

...but it can sting like hell when you feel like what you are saying is important and nobody seems to be listening.

When it comes to communication, rapport is the vehicle that connection travels in.

Rapport is the proverbial glue that strongly holds connection and communication together.

When you are out of rapport with somebody, it can feel like they are talking at you rather than with you.

But before we dive deeper into this blog post, we are already way ahead of you and know the question you probably have on your mind right now.

Step 2: If you do bake oatmeal raisin cookies - throw them out! Remember last time?!

The Differences in Rapport - Hypnosis VS. NLP

Now that we got that out of the way, let’s dive deeper into what rapport is and how you can use it.

Rapport is the main factor in determining whether you have a solid connection with somebody or not. Yes, we already said that. But it’s that important.

When we talk about rapport in terms of hypnosis, we are discussing the perceptual relationship between the hypnotist and the subject. A person in profound trance will only respond to the hypnotist, ignoring all other people, unless otherwise instructed.

But this article is about the day-to-day rapport that you experience. Rapport of that sort is taught in the field of neuro-linguistic programming. So that’s what we’ll focus on.

With NLP, there are two types of rapport:

There is a single quote that can be used to sum up both ways of using Rapport and NLP.

“Nobody will be influenced without rapport - not even yourself”

Regardless if you decide to use NLP for your own personal use or you want to help others to improve their lives, you will be unable to achieve either result if you don’t have good rapport.

It’s a weird concept, and yet, it makes total sense.

When we want something in our life, like if we want to lose weight or stop binge drinking, no matter how much we consciously say, “I’m gonna stop…!” unless we have full cooperation with our internal self (the unconscious mind), it is probably never going to happen.

Your unconscious mind is focusing ... quite intently ... to everything you are reading right now.

In fact, it’s in charge of your blink reflex, your heart rate, the ability to process the symbols on the screen and decode them into an understandable language.

The unconscious mind is also where your behaviors, habits, daily routines, memories, past experiences, and the inner connection to all of that within your life.

When you consider all of the ways in which your unconscious mind is “running the show” behind the scenes, it can be a bit overwhelming!

Yet, just knowing this simple model can help you understand rapport on a much deeper level.

As mentioned earlier, when we want to lose weight or to stop drinking for example, we need to have full cooperation with our unconscious mind because it’s where our behaviors and habits are!

Feeling better is fine, but it doesn’t mean anything will actually change.

By getting rapport between our conscious and unconscious minds, we gain the ability to change affirmations into beliefs.

Ok - So How Does This Relate To Rapport and Others?

What is something you truly believe?

What is making you hold that belief?

When you consider what a belief is and how it relates to your life, most often you’ll probably generate a response that has some type of, “I Am..” statement.

Each of these would be considered a belief of some kind.....So you could assume then, that each of these people may act in a way that best represents what they believe, couldn’t you?

Once a person fully believes something, they will take on the personality traits, behaviors, actions, thought patterns, and habits of what the belief is.

They use an “I am” statement as a way to tell their story and then they back up their “I am” story with the behaviors that prove to themselves and others that their story is true.

That’s why people get stuck in negative feedback loops with themselves.

It’s difficult for someone who says, “I’m an alcoholic” to act in a way that is opposite of their statement.

In psychology, this is called cognitive dissonance.

Cognitive dissonance is the internal feeling of discomfort a person will have when their actions and internal beliefs don’t match up.

When feeling that discomfort, a person will often give excuses, reasons, or act in a way that is more in line with their beliefs so that they can stop the uncomfortable feelings.

You can use this to your advantage, say, if you are giving a keynote speech.

Before starting the speech, you could say, “I know this group is the kind of group who will give the speaker a fair shot at presenting and will listen with focus because the information is important!”

By doing this, the belief has already been established and now there is a standard for the group to meet, since this is now the generalized belief of the group.

As Mike has said several times, “Give someone a standard to live up to and they will meet or exceed it.”

How to Effortlessly Gain Rapport

You might be thinking, “Alright there, Captain Oatmeal Raisin, enough with the gobbly goop! Teach us how to use this rapport thing!”

To that we say, we’re WAY ahead of you, and in fact, I’ve already taught you how to naturally build rapport AND we’re going to teach you some easy techniques on how to do it yourself.

Are you ready to learn something cool?

Nod your head if so.

If you moved your head at all in agreeance or if you internally said, “yes!” then we’ve already established rapport!

And since we’ve established rapport already you can discover just how easy it will be to use these techniques.

The first technique we are going to go over is the concept of mirroring.

Inside of your brain are a set of neurons called mirror neurons! These mirror neurons are essential in helping us quickly adapt to ambiguous or uncertain situations.

When you were young, you had to learn how to navigate in this three-dimensional world that is called reality.

Imagine if, when you were first born, somebody handed you a giant manual and told you that you had to read and learn everything about how humans operate, behavior, and how to survive in this world.

With mirror neurons, all we have to do is watch how other people behave, perform, or act and naturally match it in order to get a similar result.

This is how you and everyone else survived their childhood and social situations.

By watching other people and how they react or respond to certain situations or scenarios, your unconscious mind builds an internal representation of what the action and outcome will be.

Once that internal representation is made - BOOM - mirror neurons fire and we act in accordance to our expected outcome.

When we are around friends and family who act similar to us, that comfort of familiarity allows us to let our guard down so we can be more open to connection and vulnerability.

We can use this natural order to automatically build rapport with another person.

Quite simply, mirror what they do, but in a not so obvious way.

If someone is sitting a certain way, sit in a similar fashion.
If someone does a certain hand gesture when speaking, implement it in conversation with them.

The secret is to do it so subtly it seems natural.

By default, the other person’s mirror neurons will light up and give them the internal signal that something feels familiar and safe, so the defensive walls need to come down.

This is similar to mirroring - in that it produces the same familiar “safe” feeling.

The difference though between mirroring and matching is that matching is about the specific language or words they use.

So, for example, what if somebody says, “I feel really sad..”

But you, prior to knowing about rapport, said something like:“Oh! So you are really depressed and upset…”

How do you think the conversation would go?

You have a 50% chance of being right…

Because regardless if the person was feeling depressed or upset, there is a good chance that you broke rapport with them a little bit.

What if to them, “really sad” just means they feel a more than usual “sad” today, yet to YOU, “really sad” means depressed, unable to function, sleeping in bed for days on end.

Besides getting the feeling wrong, now they will probably question if you are even listening.

The easiest solution is to literally match their language.

Internally their unconscious mind lit up because you used THEIR specific language to discuss the situation. That's what Clean Language is.

The best part is that it’s effortless!

But what if we could simplify this even more?

That’s where the concept of the “interesting person” comes in.

The interesting person comes from the work of John Grinder, one of the original founders of NLP.

His secret to quickly building rapport was to immediately imagine and pretend that the person he was communicating with was THE most interesting person in the room.

When you fully and congruently believe that the person you are speaking with is the most interesting person you’ve ever met, your mirror neurons will light up and you might find that you are naturally matching their language anyways!

So when you can provide these simple values to another person through conversation, you are going to end up building an automatic and powerful rapport.

When you can effortlessly connect with other people and establish a firm understanding of their needs and wants, helping them overcome their issues and problems becomes much easier.

Want to Master the Essentials of NLP?

If you’d like to learn more neuro-linguistic programming principles, techniques, and ways you can improve your own life and the lives of others, then NLP Essentials is the course for you.

NLP Essentials is jam packed full of high quality and hilariously fun videos and modules. Mike and Chris believe that if you understand the principles of something, you can model it and become naturally effective with it.

That means you’ll get a thorough grasp on the essential parts of Neuro-linguistic programming that matter most without the fluff that other NLP trainers are often known for.