The Milton Model – The Language of Trance 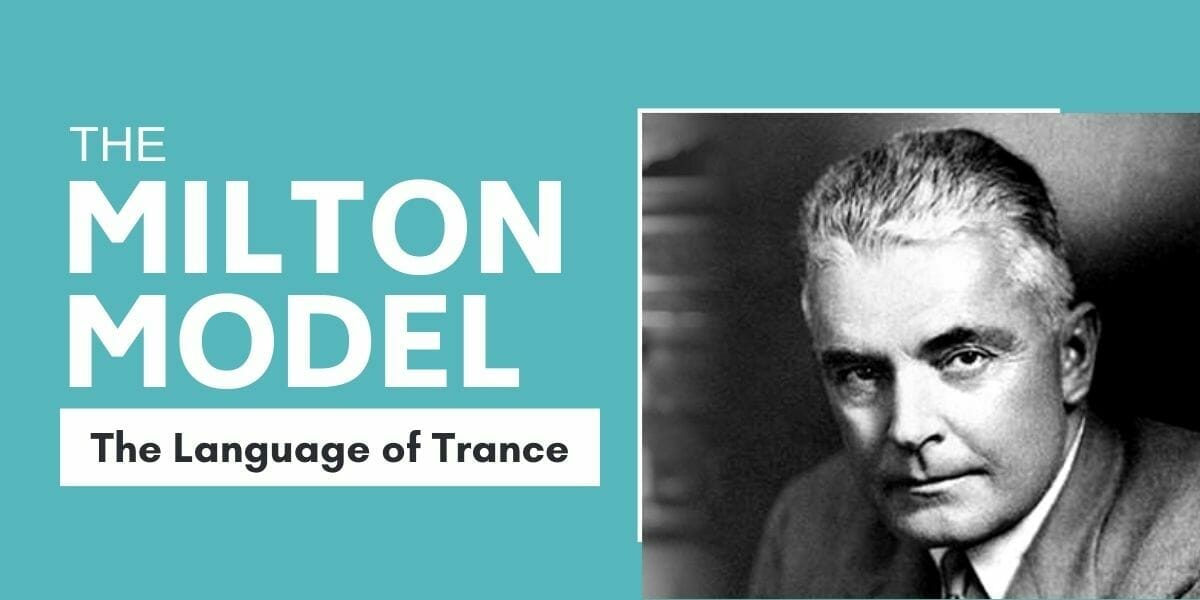 So to preframe this, we’re not saying what we are doing is casting powerful spells like some type of grand wizard with a staff. Of course not.

What IS being said though, is that it will seem as though you are capable of casting spells that can dramatically influence the decision making of another person.

Once you learn the Milton Model of language, you’ll feel like a powerful wizard.

Hypnotists, hypnotherapists, therapists, counselors, and coaches know just how incredibly empowering the right words can be.

Do you want to use language to weave a new reality for people? The Milton Model helps you do exactly that. Whether you want to inspire someone to perform at their best or guide a client through a therapeutic protocol, use this model of language to get better results.

This is the true power of Neuro Linguistic Programming and Hypnosis.

The Milton Model is another incredible tool/skill set to learn.

This is a video introduction we published on Youtube. You can watch it now or just keep on reading:

The Milton Model is named after the late and world-renowned Dr. Milton H. Erickson, who is considered the father of modern hypnotherapy and conversational hypnosis.

As you probably already know from our series of NLP blog posts, the main principles and foundational tools of Neuro Linguistic Programming were discovered by Dr. John Grinder and Richard Bandler.

They combined the knowledge and wisdom of three incredible therapists, one of which was Dr. Milton H. Erickson, who was a phenomenal hypnotherapist / hypnotist.

Ultimately they found that by modeling the successful behaviors, routines, and ways of believing, a person can increase their odds of favorable results.

You see, the reason Erickson is so important is because he had this incredible way of speaking with people.

He would talk in metaphor and stories layering on certain patterns of language that would cause his clients/subjects to turn their focus inward, in order to process and understand what he was saying.

Through certain techniques and years of experience, Dr. Erickson would be able to put people into a deep hypnotic trance, just through conversation.

This is where the term conversational hypnosis comes from.

And Dr. Milton H. Erickson was the father of it.

Wait, does that mean …

It means that The Milton Model will allow you to put people into a hypnotic trance in everyday conversation.

The best part is, you can naturally learn The Milton Model in the Mike Mandel Hypnosis Academy; you’ll get really good at the principles and can just automatically use them in your everyday conversation.

Essentially, there are certain phrases you can say and words you can use at specific times, that will naturally allow you to slip past what is called the critical faculty.

In fact, the critical faculty reminds us of Dikembe Mutombo, the famous basketball player who could slap the ball away from anybody.

You probably remember him from certain TV commercials where he would slap random objects out of the air and say, “Not in my house!”

The Critical Faculty? What the Heck??

There are several hypnosis and NLP trainers who use other phrases to describe what we call the critical faculty.

Now, when we say critical faculty, just know that this is a model and isn’t part of the physical structure of your brain.

So then, imagine the critical faculty is like Mutombo…and any other name for it is like the basketball he’s about to slap away. That’s right. Use the correct term. Faculty. Not Factor.

Our unconscious mind is where we store all of our beliefs, behaviors, internal patterns of programming, and schema’s we use to process and operate everyday life.

The critical faculty’s job is to filter out the junk that we disagree with or that isn’t good for us.

It allows us to make rational decisions, stand our ground, and commit to our beliefs…

..bbbbbuuuuttttt sometimes, our critical faculty will see something shiny and turn it’s back away, preventing it from being able to see what’s coming.

That means your beliefs, internal dialog, ways of thinking, ease of believing, and ability to rationalize your own perception, become open to what is called “suggestion.”

Advertisers and marketers know some of these principles so well, they can write a headline that incites rage or create a video ad that immediately persuades someone to act.

This includes food, sports, retail shops, and other forms of advertisements, all working to get past Mutombo so that they can gain access to your unconscious mind and get you to spend your hard earned money with them.

When it does work, like if you are watching television or driving and listening to the radio, you often become aware of a lingering “I really feel like I need to do this...” type of feeling.

Have you ever been in a situation where you saw or heard a food commercial or somebody said something about a restaurant that immediately made you want to go eat?

That was the power of suggestion, pulling you ever so closer to being unable to fit into those jeans you promised yourself you’d one day be able to wear again.

This is how The Milton Model works

By using the right set of language patterns, and a specific way of speaking, you’ll ultimately convince your client/subject’s critical faculty to turn its back on what’s happening, just long enough to allow words to sink into their mind.

There are various ways this can happen, either through the use of nominalizations or unspecified verbs, while stringing them together ,using linkages. You can also get a bit fancier by incorporating language patterns such as the tag question ...can’t you?

...and it’s important for you to remember that the foundations of NLP were based on the work of Dr. Erickson, who knew the principles were essential to using conversational language hypnotically.

Some of the The Milton Model of Language uses words and phrases like:

These words and phrases are only a small glimpse of the wide array of language patterns and conversational hypnotic principles.

The Milton Model is all about speaking in a way that is artfully vague, yet undeniably true. And when we speak this way, we cause the listener to, unconsciously, work a bit harder at converting our words into something meaningful.

Let’s explain this with a quick example.

Unspecified verbs are just verbs that lack specificity. If I tell you to walk to the store we probably have the same idea of what walking means. But if I tell you to “appreciate” something … what does that even mean? Is it something you consider internally? Or am I asking you to run out to buy a Hallmark greeting card for someone? It’s unspecified.

When you string these types of words together, you cause the other person to tax their brain a bit as they chase the meaning of what you’re actually saying. But it’s not so vague as to be annoying or weird.

When you use artfully vague language that appears to make sense, on the surface, but taxes the listener’s brain, as he works to translate your language into something meaningful, you can drop in suggestions, stories, empowering questions, or any other hypnotic tool to influence change.

Is this topic something you’d like to dive into a bit deeper?

With so much to learn, the question becomes, “How do I know I’m being taught the right information so I know it works?”

That’s why we created the Mike Mandel Hypnosis Academy - the fast track to turning simple words into powerful tools of suggestion.

MMHA is for the type of person who wants a fun, easy, and affordable way to learn language patterns and conversational hypnosis, without the fluff.

The best part about MMHA is that we made it easy to learn, with short, simple videos that can make an absolute beginner feel confident in their hypnotic ability.

Click below to check out the Mike Mandel Hypnosis Academy and in just a few short hours, you’ll have an awesome set of tools to optimize your conversations and notice incredible results.