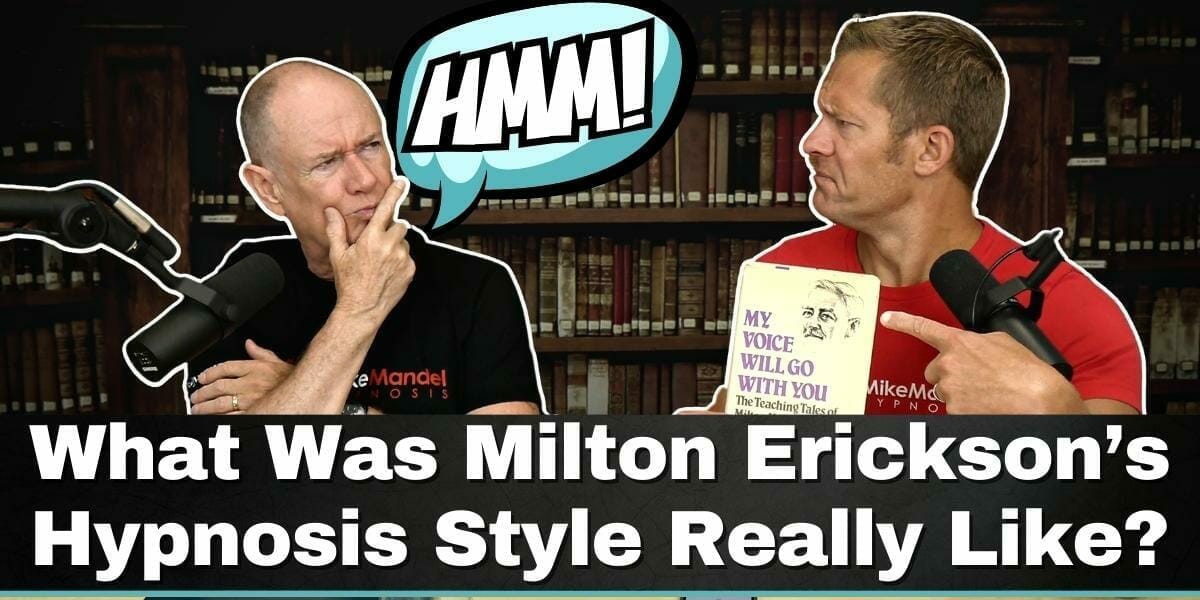 Of all the stars in the world of hypnosis, none shines so brightly as Dr. Milton H. Erickson.

Indeed, there have been many hypnotic legends, from Mesmer to Bernheim, and Esdaile to Elman. But when everything is taken into account, there is no-one else who even approaches Erickson’s near-mythical stature.

A medical doctor and psychiatrist, Erickson suffered several disabilities. He was stricken with polio at a young age, and eventually became confined to a wheelchair. He was also tone-deaf, and color blind.

But despite his limitations, and perhaps because of them, his hypnotic abilities were off the scale.

Unfortunately though, a number of modern practitioners have misunderstood and misapplied Erickson’s seemingly magical methods, largely from failing to study his own research papers, which are profound in their insights.

Erickson’s interest in hypnosis began when he saw a hypnotic stage performer, at a young age.

He intuitively grasped the transformational power inherent in hypnosis, and believed that it had vast potential, beyond mere entertainment. When the polio paralyzed him as a young man, Erickson developed visual and auditory acuity that later served him well as a hypnotist.

But by his own admission, Erickson’s initial hypnosis work was far too directive. Not surprisingly, in those early days of modern hypnotherapy, Erickson used the typical methods that were widespread at the time (Watch: Did Milton Erickson ONLY Do Conversational Hypnosis?).

These consisted of the usual paternal approach, which involved very specific direct suggestions, given after a ritualistic, and quite authoritarian trance induction.

In the early to mid 20th century, it was always clear in any hypnosis session that the hypnotists were the locus of control. They were commanding and powerful, and the subject was expected to be compliant and passive, obeying the hypnotist’s every order. (Bela Lugosi as Dracula added much to this style of hypnosis!)

Fortunately, it can be rightly said that Erickson was a hypnotic pioneer, who freed hypnotism from its overly-directive shackles.

As a psychiatrist, Erickson had a profound interest in the unconscious mind, and realized that it was the place where real and lasting change occurred.

Over time, he began to view the unconscious differently than many psychiatrists, who were heavily influenced by Freudian definitions and paradigms.

Instead of seeing it as a pit of unresolved urges and traumas, he perceived it as a font of wisdom. To him it was a creative force that could be harnessed for good; a concept that is now largely mainstream among hypnosis practitioners.

Since all humans have thousands of learning opportunities and experiences throughout their lives, Erickson believed that everyone had resources available below the threshold of their awareness.

And hypnosis was the means to accessing these resources.

Although known primarily for his hypnotic brilliance, Erickson was also a consummate researcher. The Collected Works of Milton H. Erickson MD, remains a must read, for anyone who seeks to understand the man and his work.

Erickson’s theories developed over time, and evolved into his mainstay, which was utilization. Basically, he accepted whatever behaviour the patient offered him, and then used that behaviour to facilitate a useful response.

Although some have denied the accuracy of their evaluations of Erickson’s techniques, NLP co-founders Richard Bandler and Dr John Grinder did much to attempt to linguistically codify his language patterns.

This led to an easily conveyable set of patterns known as The Milton Model, based on generalization, deletion, and distortion.

With the Milton Model, one can potentially speak hypnotically anytime and anywhere.

But it’s Erickson’s later work that contains his most startling and original methods, including the Handshake Induction, which is just what it sounds like.

Erickson became known for putting people into trance when he met them and shook their hand; something that made other people wary of him, as his reputation grew.

Although this induction was one of the things Erickson was most known for, it seems likely that the technique was first developed by Ralph Slater, a traveling stage hypnotist. It’s certainly possible that Milton saw him perform, and gave the induction his own particular refinements

As he moved away from direct methods, Dr. Erickson began to be much more conversational, and even maternal in his approach to hypnosis. This enabled him to enter psychodynamic loops or “hypnotic conversations” with his patients and subjects, often never doing a formal induction at all.

He used double-binds, offering a pair of possibilities for his subjects to choose between. Naturally, either one would give him the outcome that he wanted, such as:

Would you rather go into a trance quickly…or slowly?

Whichever one the subject chose, trance would be the certain result.

By offering back the subject’s language without interpretation, Milton Erickson built strong rapport, and could then verbally lead the subject to access unconscious resources, to make powerful changes inevitable. Although it must be said that Erickson never defined what he meant by “unconscious”.

Some of Erickson’s most startling results come from his superbly crafted stories and hypnotic metaphors.

By fixating a subject’s attention, he would open the door to a metaphor that could slip past the mind’s critical faculty, only to function below the threshold of conscious awareness. When the subject’s condition improved, it would often seem unconnected, at least in his own mind, to anything Erickson had said or done.

(Read: Hypnotic Metaphors and How To Use Them.)

Another layer of Erickson’s hypnotic genius should be recognized, which was his incredible prestige, a hypnotic concept that goes back at least 1,000 years to the last Anglo-Saxon English King, Edward the Confessor.

The King would lay hands on his subjects, if they could possibly get an audience with him. Because it was believed that he was a king by divine right, it was thought that he had near magical powers, and the sick would sometimes be healed. Mesmer had the same power, as did several other hypnotists, at least once their fame had spread far and wide.

Erickson had immense prestige, both among lay people, and physicians and psychologists too. Based on that alone, it’s not too surprising that he achieved all that he did. When Erickson delivered a metaphor, people listened, and his prestige and reputation energized all that he did.

Today the direct connection to Milton Erickson is fading quickly, as those who met him and studied with him are old, or already passed away.

Now there are distilled and largely inaccurate and misunderstood versions of his work. To that end, it can be safely said that nobody is consistently getting the results that he got.

It must also be stated that Milton Erickson did not do “Ericksonian hypnosis”. The term emerged some time after his death in 1980, but has become a catch-all term for a box of techniques; many of which Erickson would not have recognized at all.

Fortunately, Jeffrey Zeig and the Milton Erickson Foundation keep his legacy alive today. They provide training to maintain the enormous contribution of knowledge and experience that Erickson brought to the world.

Others, such as Igor Ledochowski, and Dr. Richard Hill, teach creative therapeutic methods that are soundly anchored in Erickson’s later work.

Perhaps Erickson has gone the way of the late great Bruce Lee, and the legend has eclipsed the man himself.

But Milton H. Erickson did more to promote, research, and refine hypnosis, than anyone who’s ever lived.

Mike Mandel is one of the greatest hypnotists alive today.

His knowledge and expertise in both the traditional direct method of hypnosis and the Ericksonian indirect method allowed him to create a style that combines the best of both approaches.

We teach Mike's style on the Mike Mandel Hypnosis Academy (MMHA), where you can join a community of hundreds of skilled hypnotists and like-minded individuals from all around the globe.

Click here to get an 100% free Test Drive at the Mike Mandel Hypnosis Academy.