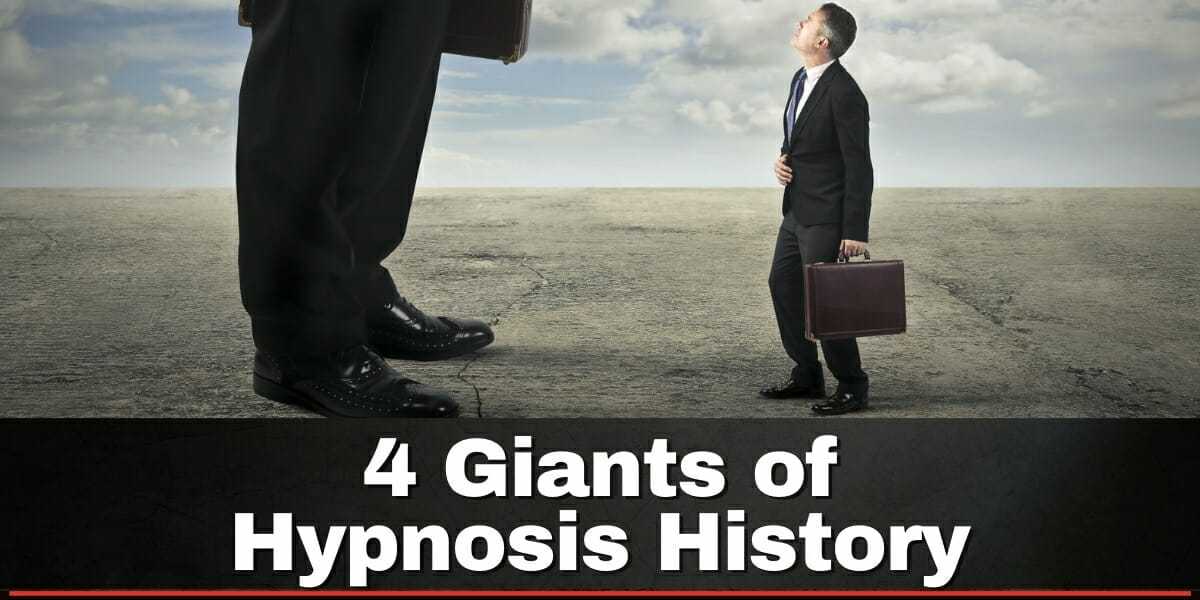 Sometimes knowing a little bit of hypnosis history makes you sound smart. In this post, we’ll discuss 4 legendary giants of the industry.

Even though hypnosis dates back to the beginning of time, these four historical hypnotists each played an important role in the evolution of hypnosis. Interestingly, all their second names start with the letter E. That’s why we often call them “The Four E's of Hypnosis.”

Let’s dive right into how each of these very skilled individuals enhanced the world of hypnosis.

A British Army Sergeant who practiced Mesmerism in India, Esdaile spent hours getting people into trance states so he could perform surgeries on them.

With two hundred of these surgeries under his belt, he decided to move to London in order to further his career. But unfortunately, he could not make hypnosis work in this different culture. The British were skeptical, unlike his Indian patients.

He found it easier with the Indians as they already believed in superstitions and rituals, and were more prone to believe in what he did. But in Britain, he was unfortunately cast aside, despite his many painless surgeries and unique methodologies being well-documented in his amazing book, “Mesmerism in India”.

You can actually download this very old book here for free. Just wait until you get to the section where he removed 80 pound testicular tumors with no anaesthesia.

A Canadian-American Psychologist who was the father of direct suggestion and an expert on hypnosis during World War II, Estabrooks worked alongside MT Orne to attempt to create hypnotic couriers, who would carry information behind enemy lines. It’s rumored that they also worked on turning subjects into “Manchurian Candidates”, or hypnotic assassins, with the MK Ultra program.

Estabrooks did fascinating experiments with self-hypnosis, and created a polar bear hallucination that followed him around as he did his hospital rounds! Eventually, the bear became problematic and would show up at unexpected times. Estabrooks eventually put himself back into trance and banished his creation.

(Read: The Milton Model – The Language of Trance).

Erickson was the legendary psychiatrist who studied direct hypnosis under the tutelage of Clark Hull and quickly surpassed his teacher’s abilities. He went on to devise a new form of hypnosis that came to be referred to as indirect or conversational hypnosis. By simply talking to his patients and telling stories, Erickson created powerful change, through very subtle methods.

He put people in and out of trance effortlessly, through a skilful mix of offering suggestions and options, thus firing different resource states. This was later codified by John Grinder and Richard Bandler into ‘Ericksonian Hypnosis’, which is now taught to students all around the world. This includes our own Hypnosis Academy.

Most famous for having rediscovered the previously mentioned ‘Esdaile state’. He was able to help doctors perform painless surgeries using only hypnosis as anaesthetic. While it took Esdaile a couple of hours to achieve this deep hypnotic trance, Elman was able to do so in a matter of minutes.

(Read: The Dave Elman Induction: How to Master This Classic and Essentially Perfect Hypnotic Induction).

To his credit, he trained more medical professionals and dentists in the use of hypnotism than anyone else in the United States. Elman also created many rapid inductions, and was the first to use fractionation, deepening trance by quickly bringing his subject to the surface, and then immediately putting him back into hypnosis.

Dave Elman and Milton Erickson were adversaries in the field. Their hypnosis styles were polar opposites, both of which are equally important. While the former used a more direct form of hypnosis, Erickson used artfully vague language to get his clients into a trance. We believe you should learn both styles, but the Ericksonian one first. Click here to learn why.

Thanks to the work done by these stellar men we have hypnosis as an effective modality to address a host of issues ranging from stress and anxiety to phobias and even pain management today.

If you are intrigued and want to learn more about hypnosis, join our Mike Mandel Hypnosis Academy, where you will learn all kinds of hypnotic techniques, so you can do amazing work, not only in your own self-development but also with your clients.