Traditional or Ericksonian: Which Hypnosis Style Should You Learn First? 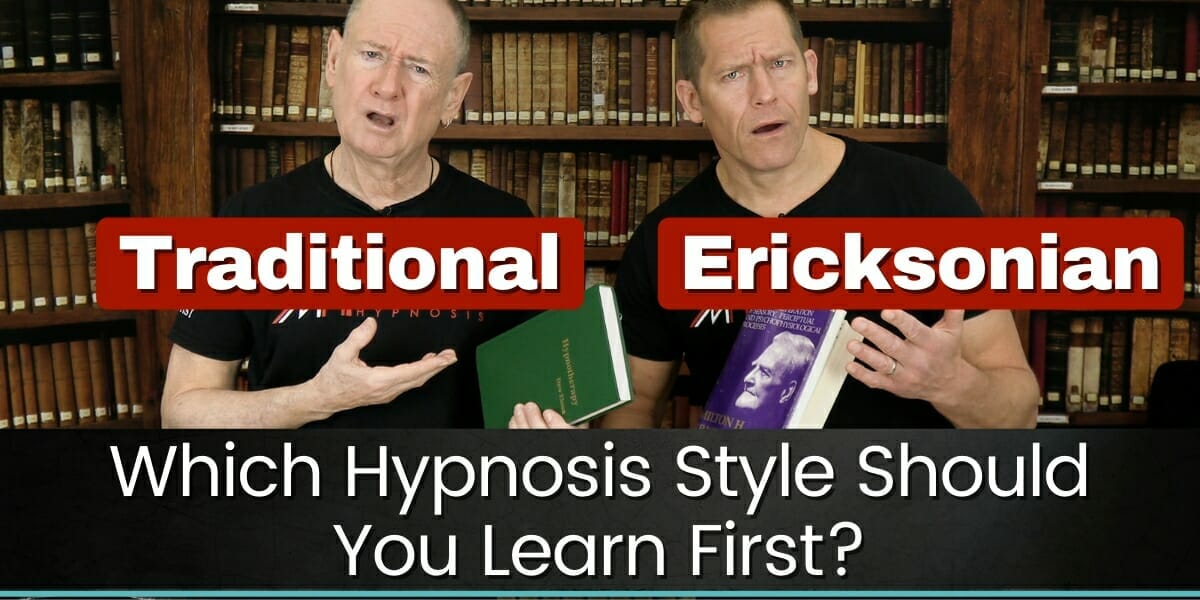 We hold a firm opinion on which of the two major hypnosis styles you should learn first. In this blog post and embedded Youtube video, we’ll explain why.

What Are the Different Hypnosis Styles?

Most hypnotists (us included) will often talk about hypnosis as having two different significant styles, one of them being traditional or direct hypnosis, the other being Ericksonian or indirect hypnosis. These are the most basic and easy-to-understand forms of explaining how hypnosis techniques are generally divided.

But as with most things in life, we can’t put these in a box. They work more as different ends of a spectrum than two distinct styles, with lots of shades in between. This means the same hypnotist performing his usual techniques may incorporate elements of both ends and move along the spectrum according to his current necessity. We believe in flexibility.

This is not only normal but also desirable. At the Mike Mandel Hypnosis Academy, we teach students what Mike calls his Neo-Ericksonian style. He incorporates the best of both worlds in an easily understandable model, where techniques belonging to both ends of the hypnosis spectrum are available as needed.

Here’s a quick summary of what both ends of the spectrum are all about.

This is the most traditional form of hypnosis. Back when James Braid developed the most rudimentary forms of hypnotism (along with the word “hypnosis” itself), the techniques available were based on straightforward instructions. “Look over here,” “let your eyes become heavy,” and phrases of the like were the standard for all hypnosis practitioners.

Understand though, these commands are powerful when delivered confidently and authoritatively. A skilled hypnotist will know how to provide direct suggestions powerfully so they’ll have a profound effect on their subjects’ psyche (should they allow it, of course). And because it is so powerful, it’s still beneficial and a fundamental part of any good hypnotist’s toolkit.

It does have its limitations, however. The direct style of hypnosis may not be the best pick for subjects with slightly higher defenses in place. This means an elevated amount of resistance and fear. Because it’s a paternal and sturdy approach, it may elevate this resistance beyond the limit of where hypnosis can happen. This is obviously not good for anyone.

Suppose direct hypnosis works similarly to an authoritative father giving explicit directions and commands. In that case, indirect hypnosis takes on the role of a gentle and caring mother, offering options and creating a smooth pathway into a trance.

By using cleverly crafted language patterns and indirect suggestions, Milton Erickson developed a style of hypnosis capable of bypassing resistances and accessing the unconscious mind in a way that almost doesn’t seem like hypnosis. During a regular conversation with a patient with whom he’d build strong rapport, Dr. Erickson would tell stories and invite them into a trance journey of introspection and self-discovery.

Read the following blog posts to better understand how Ericksonian hypnosis works and what it consists of. They’re full of valuable information and informative explanations:

How To Use Embedded Commands in Hypnosis and Conversation

Hypnotic Metaphors and How To Use Them

The Milton Model – The Language of Trance

Where Should You Start?

When Mike started teaching hypnosis, he began by introducing the direct style. He thought that, because it is simple and relatively easy to learn, people would get good results right away, which would be a good thing.

He was right, but there was a problem: people didn’t seem to care enough to learn the indirect style after already learning the direct one. They were already getting great results, so all of that seemingly complicated flowery language wasn’t very appealing.

Hence, Mike decided to teach the indirect style before any direct stuff. After they learned the slightly more challenging Ericksonian approach, he found that students would gladly learn the direct style afterward. Best of all, they’d be perfectly able to blend the two styles together as Mike intended.

It’s a little more work to learn upfront, but it’ll give you a much more full box of tools if you do this. We strongly believe that this is the way you should go. That’s what you’ll learn at the Mike Mandel Hypnosis Academy.

The Mike Mandel Hypnosis Academy (MMHA) is designed to be enjoyable and fun, where both styles of hypnosis are introduced and taught in great detail. You’ll be amazed at how easy hypnosis is as you hone and develop your hypnotic skills to an extent you never imagined possible.

In our core 24 lessons, we’ll teach you all the essential things you need to know to be a skilled and successful hypnotist. If you’re already an experienced hypnotist, or even if you’re just starting out and know close to nothing about hypnosis, MMHA is the program for you.

Click here to get a 14-day FREE trial at MMHA.