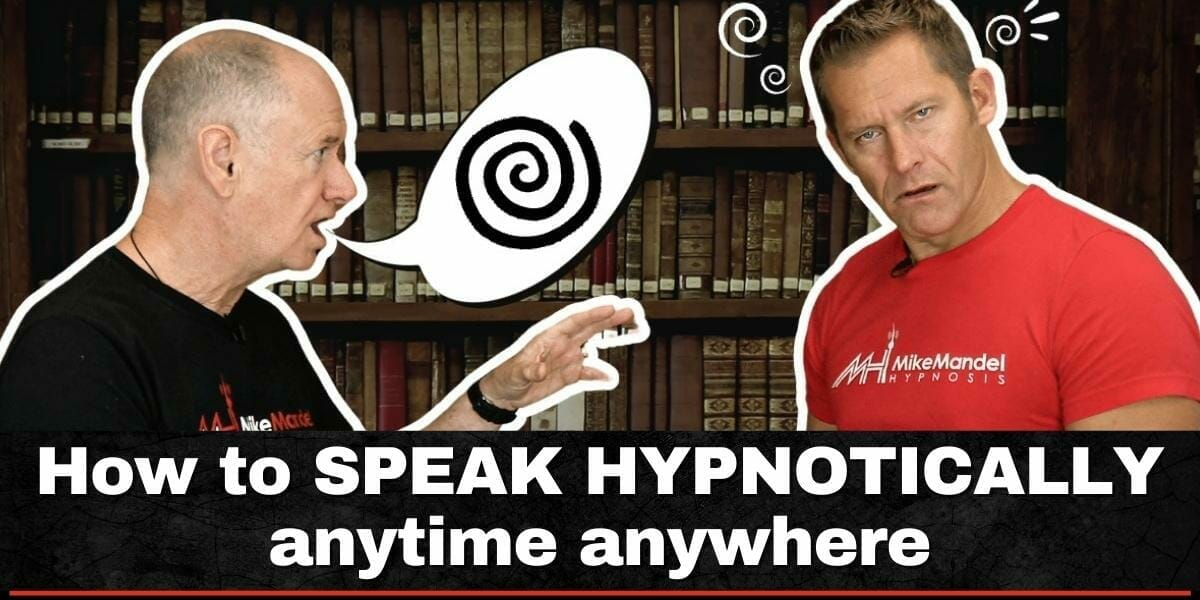 How awesome would it be if you could hypnotize people at any given time using nothing but your words?

That’s the power of conversational hypnosis.

In this blog post, we’ll explain to you how this is possible, and how you can already start doing it.

If you’re familiar with Neuro-Linguistic Programming (NLP), you must have heard of non-verbal pacing and leading. If not, watch this video below to understand how it works.

It basically consists of synchronizing your body language and gestures with the other person’s - that’s pacing. Then slowly transitioning towards a more desirable state. If you’re in rapport, they’ll follow you into it - that’s leading.

You can already build immense rapport by simply observing how the person you’re interacting moves and gesticulates, then subtly replicating these gestures in your own body language. But we’re here to talk about how to develop conversational skills. So how can we use pacing and leading when speaking?

First notice the rhythm and the tone in which the other person speaks. If they’re a fast speaker, take care not to speak too slowly, even if that’s your usual style. You may eventually lead them toward a slower pace, but only after you’ve successfully built rapport by pacing and roughly matching their fast manner of speaking.

You should do the same with their vocal pitch, just remember to not overdo it. Adjust your vocal tone only enough so it’s not so different from theirs. The goal is to make it seem natural. That way, rapport between you will grow effortlessly. But if you make it obvious to the other person you’re attempting to imitate their vocal pace and tonality, that will become a rapport breaker instead (Read: How To Use Vocal Tonality for Better Results in Hypnosis.)

A more subtle way to pace them verbally is by using the same words as them. By picking up on a few keywords they say, then offering it back to them when it’s your turn to speak, other people will feel listened to and respected.

If a friend says he’s having tremendous difficulty at work, don’t ask how all the trouble started. They described it as a difficulty, whatever that word means for them, so respect that and offer the same language back.

This kind of clean language is an excellent tool in everyday conversation as well as in a hypnotherapy session. Using a client’s own words can make a tremendous difference in the end result.

Still under the scope of pacing and leading, this simple technique allows you to direct the conversation to where you want it. It’s a powerful persuasion tool that will finally lead the other person towards the intended outcome. We covered this in a previous blog post. Click here to read it.

A yes set consists of making about three simple statements that are certainly true in the situation; like that you can obviously read in English (1), because you’re reading this blog post right now (2) and you’re interested in learning conversational hypnosis (3). Because these statements are all undeniably true, they’re bound to agree with them (or say yes), even if just internally.

After saying yes a few times in a row, you’re now in an agreement frame, so iit becomes very difficult to shift to a no. Therefore, the person will become much more likely to agree with whatever statement you present to them next.

That is a yes set.

The yes set must be followed by a useful leading statement. A valuable insight, a different point of view or a certain action they’re compelled to take will now be met without resistance, because it will be perceived by the unconscious mind just like the previous statements you presented: as undeniably true.

A compliance set is no different, except that it involves getting the person to agree to simple actions instead of statements. Telling a person to take a deep breath, relax and close their eyes before starting a hypnotic induction can be considered a compliance set. The idea being if they can begin by following easy instructions, they become more likely to succeed in the more difficult ones ahead.

Although compliance sets are more commonly used in formal hypnosis settings, it’s useful to understand the working principle behind them so you may creatively apply it in everyday conversations. To make a compliance set even more powerful, use it immediately after a yes set. That always builds a powerful momentum in the other person’s mind towards making a change, gently and easily.

NUVI stands for Nominalization Unspecified Verb Integration. It will make sense as you keep reading.

This is where the use of a clean language as we mentioned before, that is, offering the other person’s own words back to them, is going to come in clutch.

We define nominalizations as nouns that have no physical form. They’re labels that people use to describe intangible concepts.

Words like “happiness”, “sadness”, “love”, “empowerment”, “depression” etc. are all nominalizations meant to roughly summarize complex emotional experiences. As such, each person must have a slightly different understanding of what each of these words mean.

As there’s no point in trying to figure out the exact meaning of a given word for each person, by simply using that same word in the same way they used it, we become aligned with their model of the world (Read: The Map Is Not the Territory: NLP Presuppositions.)

An Unspecified Verb is the action-oriented version of Nominalizations. Words like “learn”, “understand” and “transform” are all verbs that will have a slightly different meaning to each individual. They have a powerful effect when combined with Nominalizations.

You may suggest to a person that they can learn to really understand how that feeling of sadness comes about, and how to transform that into a more empowering state.

Can you see what we’re doing? We have no idea how exactly each person’s mind is going to attach meaning to these words, but they will do so in a way that’s appropriate for them according to their model of the world, based on their own life experiences and beliefs.

What you’ve just learned in a few paragraphs is the use of artfully vague language, which is probably the most fundamental part of conversational Ericksonian hypnosis. Because your words are so non-specific, a person's mind is compelled to go into an introspective trance state in an attempt to attach meaning to what you’re saying.

So far, we’ve pretty much covered the first three letters of the NUVI acronym. With Nominalizations and Unspecified Verbs under the belt, it’s time to learn the Integration part of NUVI language.

By pacing and leading, you can successfully shift your vocal tone (and theirs) into a more calm, soothing and hypnotic tonality. This hypnotic voice will become anchored in their minds to the trance state, which will help a lot. To learn all about NLP anchoring, click here.

But there is one more key component to a perfectly hypnotic speech pattern, which is using the artfully vague language you’ve already learned in a sentence that never ends.

It’s a very simple thing, because you start to talk, and you’re not bringing any kind of resolution as you’re speaking to them, because you’re just continuing to speak and connecting segments of your language to the next segments using a word like “and”, which then enables you to not only determine the cause-and-effect nature of language itself, but drags the other person into your representation in such a way that they will respond perfectly, and as they do, they can just slip into a trance* or make the necessary changes and continue to transform and live a wonderful life that you’ve helped them build with your awesome hypnotic skills. That’s right…

* “Slip into a trance” appears in this example as an embedded command.

Imagine the previous paragraph said in a hypnotic voice and with intention to a person you have rapport with. It’s a sentence that never ends full of artfully vague language that you can make up as you go. Use the Mandel Triangle to improve your intention and delivery.

It’s easier said than done and it takes quite a bit of practice, for sure. But to help you with that, we’ve created an entirely free course that will enable you to generate hypnotic language on the fly whenever you want. You can see it down below.

Become Hypnotic in Any Conversation

Mike Mandel’s simple formula to communicate hypnotically. Use this for ethical influence or to help people make positive changes in their lives. Sign up now for free. 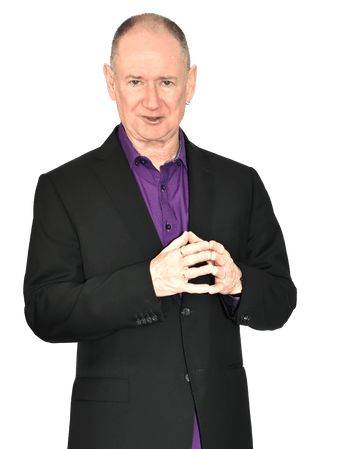 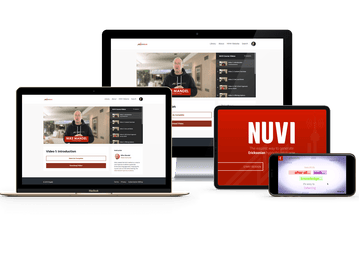 Another really awesome tool to develop artfully vague language skills are the hypnotic language cards that we developed. Inexpensive as they are (and with free shipping), they’re a small investment for a great reward, which is developing extremely powerful conversational hypnosis skills. You can order them here.

Hypnotic Power In A Box

If you’re really interested in learning more about hypnosis, there are many more tools that you can use. You can tell hypnotic stories, or you get more into direct suggestion-based formal hypnosis, among many other amazing techniques.

As such, we’d love to invite you to join the Mike Mandel Hypnosis Academy, where you can learn so much more about hypnosis.