Where Did Hypnosis Come From? 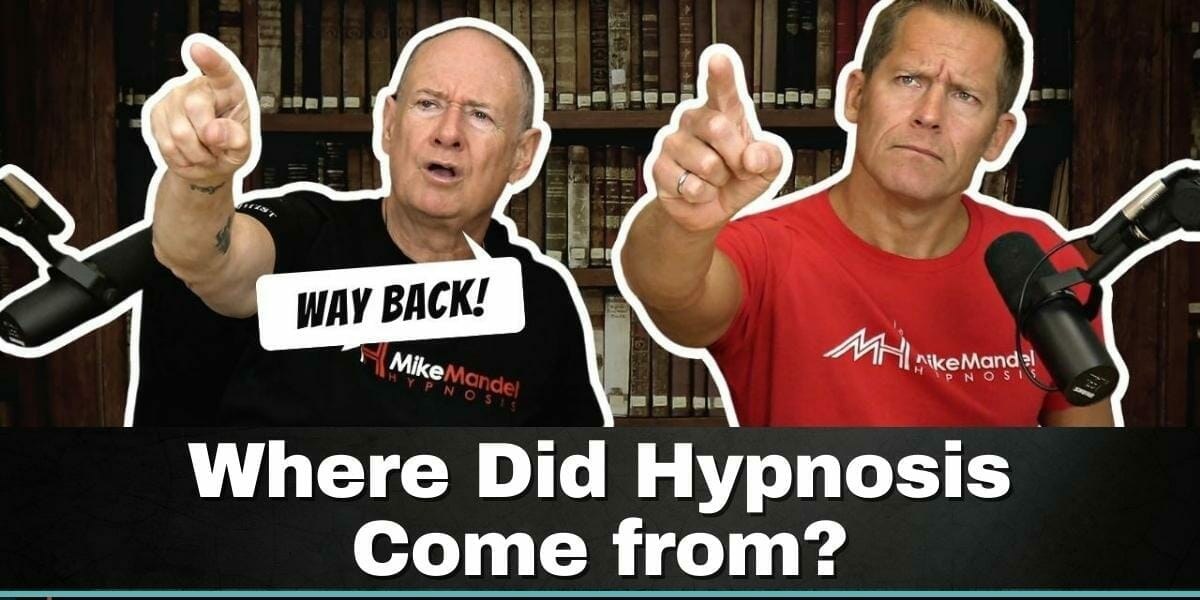 What is the origin of this remarkable art and science?

Was it discovered in a laboratory, like radium? Or did it arrive in the mailbox, or slide down the chimney with Santa?

The answer to all of these questions is:

Hypnosis didn’t come from anywhere at all…

Hypnosis has ALWAYS been with us, although not in its present form.

If we think of hypnosis as being a powerful form of communication, then we can trace it back to humankind’s earliest recorded history.

That’s because trance is a normal part of life, whether it’s created through some sort of formal induction, or occurs naturally when we zone-out, or drive a car.

In this blog post and accompanying video, you'll learn about:

The Beginnings - Ancient Egypt and Greece

From our earliest days, and before written records, ancient tribes told their stories, to preserve their legends and their history for future generations.

Typically, these stories were told around tribal fires, by medicine men and wise women. The atmosphere and the story's rich symbolism, would evoke an emotional response, penetrating the unconscious minds of the listeners.

Even today, storytelling at campfires is a popular activity, and most young children can quickly enter a trance state when they hear the words

Once upon a time…

By 400 BC, the Greeks were doing it too and built temples sacred to Apollo, and Asclepius the snake god, where a suffering person could enter a trance, and then go to sleep among the snakes, and hopefully awaken healed.

If you were lucky enough to get an appointment with King Edward, and he laid his hands on you, you might well find that your disease went into remission, and all due to something called hypnotic prestige.

Prestige is a well-established tool in hypnotic circles to this day. It’s the reason stage hypnotists often act and dress like the popular idea of hypnotists, with spiral jewelry, black clothing, and swinging pocket watches, all of which add to the hypnotist’s prestige.

For the hypnotherapist, a waiting room wall covered with certificates and credentials, creates prestige too, by increasing credibility and expectation.

Modern day hypnotism had its beginnings in the 1700s with the early experimenters; the most notable being Mesmer.

In the 18th century, Franz Anton Mesmer, a German medical doctor working in Paris, was fascinated by some of the more fringe beliefs of his time, like the supposed effect of the planets on a person’s health.

He practiced blood-letting, like most medical practitioners in that day, and studied with Maximilian Hell, who taught him the use of magnets, to stop the flow of blood from a severed vein.

One day, Mesmer opened a patient’s vein to draw some blood but realized he didn’t have his magnets with him. Mesmer was a resourceful man, and he passed a wooden stick over the man’s wrist.

Amazingly the bleeding stopped, because of indirect suggestion and the expectation of the patient.

Clearly, magnetism had nothing to do with it, but Mesmer (who was probably a bit of a narcissist) drew the erroneous conclusion that he himself was a source of magnetic currents.

He named his discovery Animal Magnetism, and went on to launch a stellar career, curing all sorts of disorders, mostly for the wealthy aristocracy. It seems that he really did help people, but not because of any kind of magnetism. Mesmer clearly had mastered that key element of hypnosis, prestige.

Franz Mesmer eventually fell into disrepute, when a royal commission arranged by King Louis XVI of France, that included the scientist and statesman, Benjamin Franklin, conducted a scientific investigation of Mesmer’s methods.

After five months, the committee determined that there was no evidence of magnetic currents of any kind. They concluded that the effects were caused entirely by imagination.

Mesmer and mesmerism faded into obscurity, but the art and science of hypnotism continued to thrive and grow anyway.

The Giants Arrive - The Beginning of Modern Hypnosis

Giants of the 1800s arose, including James Braid, a Scottish medical doctor, who accidentally discovered that eye-fixation could be used to cause trance states.

Braid was thought to have invented the term hypnotism, meaning “nervous sleep”, but was actually beaten to the punch by more than 40 years, by a Frenchman, de Cuvilliers, who was a follower of Mesmer.

There were many greats in the early days of hypnosis, including Bernheim, a neurologist, who partnered with Liebeault, another physician. Together, they documented their results with a wide variety of illnesses and disorders in Nancy, France.

In the same era, British Army surgeon James Esdaile, was conducting major surgery in Calcutta India, using only mesmerism as an anesthetic.

Despite the fact that his hypnotic methods still clung to discredited theories, and were primitive by today’s standards, Esdaile managed to dramatically reduce post-operative death due to shock and infection, about 100 years before antibiotics were discovered.

The list of notables goes on, as more physicians and experimenters took up the study, including Canadian psychologist George Estabrooks. His book Hypnotism, written in 1943, is considered a modern day classic.

By the 20th century, two noteworthy hypnotists would emerge, who would change everything, by giving this shadowy art real respectability.

Elman and Erickson - The Greatest of the Greats

The first was Dave Elman, who was no-doubt a hypnotic prodigy. Elman created a wide-variety of inductions and highly directive hypnotherapeutic methods, which he taught to doctors and dentists. His son, Colonel Larry Elman, and his wife Cheryl, continue the Elman legacy (Read: Erickson versus Elman).

And then there was Milton H. Erickson, a medical doctor and psychiatrist, who was undoubtedly the greatest hypnosis researcher, and most likely the most skilled hypnotist of all time. Erickson’s techniques grew beyond the direct methods of those who preceded him, and was the founder of what became known as conversational hypnosis.

Today, hypnosis is undergoing its greatest boom in history, and it has never been easier to learn the art and science that is hypnotism. You can buy hypnosis books from Amazon, attend meetup groups, and watch a ton of videos on YouTube (click here to visit our channel).

There are also numerous schools of hypnosis, the best of which combine the direct methods with Erickson’s contributions, and provide both classroom and online training.

All of these schools, including ours, owe a tremendous debt to all the early pioneering hypnotists that have gone before us. We are truly standing on the shoulders of giants!

To find out how we do and teach hypnosis at the Mike Mandel Hypnosis Academy, you can start with a 100% FREE Test Drive, no credit card.