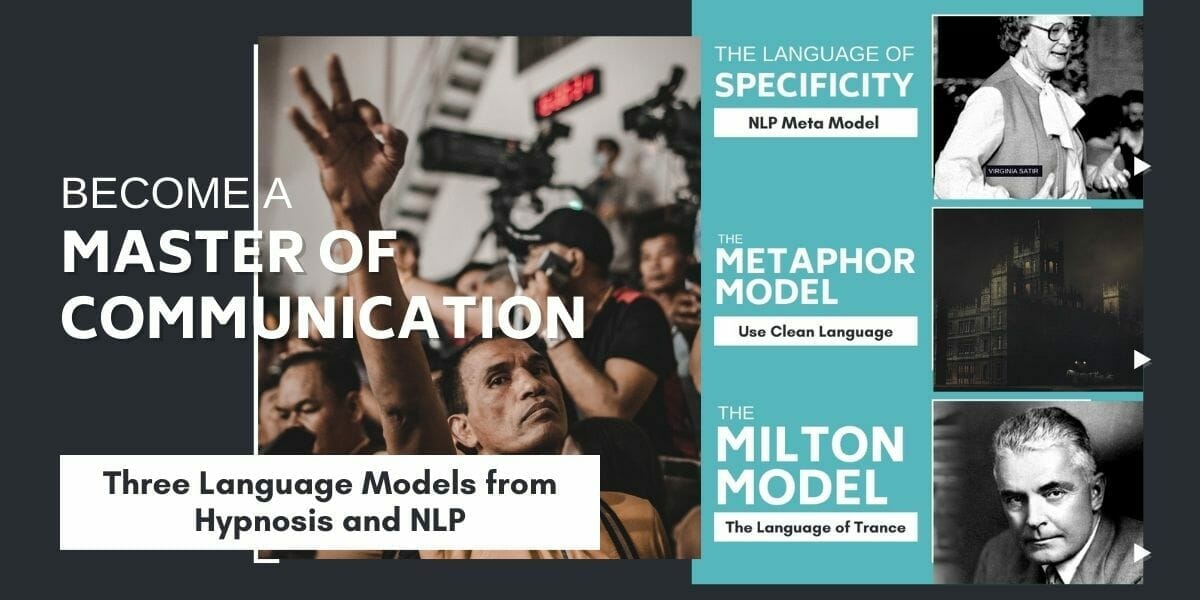 In this article you’ll learn how to use three different models of communication to get better results with clients or just in ordinary conversation.

When we look at language and its application as a therapeutic tool, three different models jump out as particularly effective. They are the Meta Model, the Milton Model, and the Metaphor Model.

In all human interaction, words provide only one of the available channels. That’s because we also respond to more subtle communication, such as body language, proxemics, tone, micro facial expressions, and context.

However, words are both useful, and unavoidable. And for a working therapist, coach, or counsellor, learning powerful ways of using language can pay huge dividends in personal changework, and effective counselling.

It is no exaggeration to say that a good knowledge and practical application of any of these three models, will dramatically improve your communication and success rate, when working with clients.

And if you learn and apply as needed, all three of these models, you will have earned the right to call yourself an expert communicator! These three models will fit well into your communication toolbox, and with just a little practice, you’ll be able to switch between them on the fly.

The key is to know which model to use, and when to use it.

The Meta Model comes from Neuro-linguistic Programming (NLP), and is a great place to start, as it’s the key to linguistic specificity. That’s because it uses language, to clarify language. This makes the Meta Model absolutely foundational for gathering information in a client intake, which can lead to powerful change through NLP techniques.

When NLP founders, Richard Bandler and John Grinder modeled highly-effective therapists, they discovered a series of “challenge questions” that made these therapists highly effective. Since Grinder was a linguist, they were able to analyze and formalize what the therapists were doing with their words, and this became the Meta Model.

If for example, a person said that his boss intimidated him, the therapist might ask:

How specifically does he intimidate you?

By asking this question, the therapist avoids putting her own meaning on the client’s words. Instead of interpreting, she clarifies the meaning by specifically focusing on the client’s answers, rather than the content of her own imagination.

Another typical example of using the Meta Model is when someone engages in mind-reading. By this, we aren’t implying some sort of psychic sense. Mind-reading occurs when we mistake our own thoughts and beliefs for what someone else is actually thinking. We’ll notice a person is mind-reading when someone says something like one of the following statements:

I know she wants the promotion to team leader.

He thinks he can just do whatever he wants!

She’s just planning to cheat all of us!

He wants to get out of this relationship.

In each of these examples the person who made the claim is engaging in mind-reading. That’s because the only way you can tell what someone’s thinking...is to ask him!

How do you know that to be true?

Meta Model challenge questions are a great way to uncover deleted information; the stuff that’s unsaid, and perhaps even out of that person’s conscious awareness. But there’s another side to it too, which gives the Meta Model its power.

Meta Model questions can be transformational in and of themselves! By answering the challenge questions, the person will often make a link to the information that’s hiding beneath the surface.

My mother’s in the entertainment business…

I knew that her mother played piano and did some fairly amateur oil painting. But that was the extent of it. She was never a performer. She was never involved in the business of entertainment shows or bookings, in any sense of the word.

I challenged the girl’s assertion with a Meta Model question, asking her how specifically her mother was “in the entertainment business”?

The result was near magical! She paused for about fifteen seconds, as her eyes went from side to side, searching through her brain systems for information. Then her face flushed, and in a completely startled tone of voice, she blurted out:

She’s not in the business!

Think about it. If I had just come right out and told her that her mother was not in the business, she might have gotten her back up and become angry. The fact that she came to that conclusion herself was what made the truth both impactful and undeniable.

In this case, the Meta Model was used in ordinary conversation, and fulfilled both of its purposes. By asking the clarifying question, I got more information. But the information was also transformational for her, causing her to realize her entire plan for her future was based on false information!

The Milton Model also comes from the work of Richard Bandler and John Grinder. It was created by listening carefully to hypnotherapist Milton H. Erickson work with his patients.

Whereas the Meta Model deals with high specificity of language, the Milton Model does the opposite. In fact, it’s useful to perceive the two models as opposite sides of the same language coin.

The Meta Model keeps you out of hypnotic trance. It does this by preventing you from going inside your own mind, referring to your personal history, and creating meaning, based on what the subject said.

On the other hand, the Milton Model is all about hypnosis!

The Milton Model actually creates trance, by not only being non-specific, but by using what’s known as artfully vague language. Instead of focusing on sensory-based  information, the Milton Model talks in verbal fluff, causing the subject to find or even create their own meaning from the words. It directs the person’s attention inward, resulting in trance states.

This is all so non-specific that it could trigger a host of Meta Model questions, like these:

Where is that “sensation”?

What “feeling” should I focus on?

You could apply Meta Model questions, but they wouldn’t be useful in that context. That’s because the whole point of the Milton Model is to be vague, but sound meaningful.

When we use this sort of non-specific language, the only way another person can understand it is to perform an internal search. When a person performs this internal search they’ll attach meaning based on their own perceptual filters, beliefs, and personal experience.

The internal search gives us a powerful way to access unconscious resources.

For this reason alone, a hypnotist skilled in using the Milton Model can cause massive shifts in record time.

While the Meta Model accesses the subject’s actual intended meaning, the Milton Model enables the subject to create their own meaning from the words you say to them.

In other words, the Milton Model actually causes the listener to perform mind reading because it’s the only way for them to make sense of what you’re saying. This mind reading occupies their brain enough to cause a sense of hypnotic trance.

Perhaps the most fascinating language model is the Metaphor Model. This model was developed by New Zealand psychologist, Dave Grove, who had an interest in NLP.

Grove discovered a different way of using language to create change, based entirely on the speaker’s unconscious metaphors.

Unconscious metaphor? This isn’t as complicated as it sounds. It just means that we tend to use metaphors when we talk, and often we have no idea we’re doing it.

Our brains love metaphors so much because symbols resonate with us. Grove discovered that metaphors and symbols are so much a part of us, that we can’t stop using them! Amazingly, we use metaphors about every six to ten seconds.

Think about it. We’re always speaking in metaphor…

He really missed the boat with that investment deal...

Their marriage is on the rocks!

I’m flying high ever since I got that raise!

In each of these cases, the sentence contains a metaphor, and the metaphor sends a message that we immediately and intuitively understand.

David Grove’s gift to therapists was the Metaphor Model, which is better known as Clean Language.

Clean language is called “clean” because it doesn’t contaminate the subject’s model of the world by leading the witness. Instead, it seeks to unpack and expand the subject’s metaphors, bringing both understanding and transformation.

Remember the Meta Model asks questions such as, “How specifically?”

But if we’re using the Metaphor Model we don’t ask this. Instead we ask about the metaphor itself.

Here are the “clean” questions that might be used with the previous examples:

What kind of boat is that boat?

What kind of rocks are they?

What kind of flying high is that?

By dealing with the metaphor directly, the subject will start to understand their situation in a new way, as further questioning will continue to unpack it. For this reason, it’s best to move quickly from a negative metaphor to a positive one, to create useful change.

For example, if the person says:

I feel like I’m in a prison in this marriage…

What kind of prison is that prison?

Once the question had been answered, the attention would be shifted away from that metaphor by asking:

This will typically reveal a more positive and useful metaphor, in order to direct the questions in a useful and generative manner. Amazingly, by unpacking the positive metaphor according to David Grove’s model, the client can often resolve their situation quickly, or at least gain powerful insights, that he or she hadn’t seen before. We say that when their metaphor changes, their life changes too.

The three models of language we have discussed are all useful in some context.

But all three of them work in different ways.

For that reason, we recommend that therapists, coaches, social workers, and counsellors, study and learn all three models. Through practice and experience, one can easily learn to shift between models, and watch their subjects transform in front of their eyes.

Your Ideal Next Step ...

If you want to dive deeper into each model, you can do so with specific books such as

Or, if you want to go take the most engaging and fun video training course you've ever seen, just sign up for a free trial to the Mike Mandel Hypnosis Academy.