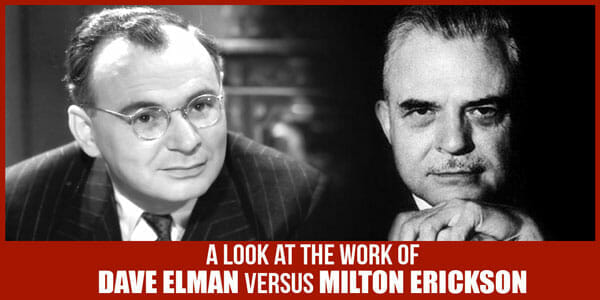 Milton H. Erickson and Dave Elman were definitely two of the best hypnotists who ever lived. They are known to have hated each other, and had opposite styles.

So who was better? It's like those age-old superhero arguments we all had as kids.  Who would win in a fight? Batman or Superman? Could Bruce Lee beat the legendary MMA fighter Royce Gracie?

In every field of endeavor, there are the greats; the men and women who rise to the very pinnacle of excellence.

And that includes hypnosis.

Two of the greatest hypnotists that ever lived

Milton H. Erickson and Dave Elman were arguably both hypnotic heavyweights who belong on every hypnotist’s Top Ten List. Although there are many others who’ve made their mark, Erickson and Elman stand out as truly brilliant, because they each transformed the field of hypnotherapy.

So which one was the better hypnotist? Who possessed the greater level of skill?

In this post we will talk about their methods and what made each one truly great. We will approach this discussion from the perspective of what made them different from each other.

That’s because by asking who was the better hypnotist, we’re missing the point entirely. It’s like comparing a stock car racer to a Formula One driver, or a marathon runner to a sprinter. We are comparing apples to oranges, and that needs to be taken into account.

Milton Erickson and Dave Elman both contributed a wealth of knowledge and wisdom to the field of hypnotherapy. Erickson was a medical doctor and a psychiatrist. Elman was “only” a layman, but he routinely trained doctors and dentists, so he clearly had credibility among those professionals.

But it was their approaches that were radically different. So much so in fact, that it’s said that although they may never have actually met, they couldn’t stand each other. I once heard a recording of Erickson who was outraged that Dave Elman had offered to teach him something about hypnosis.

It must be remembered that Milton Erickson’s background was in psychoanalysis, which came from Freud and his “100 to 300 hours to effect a cure”.

Consequently, he spent a lot of time prepping his patients for deep trance work. Erickson would train his subjects, often for multiple sessions, to experience somnambulism, in order to facilitate the best possible intervention.

Elman, on the other hand moved very, very quickly. Yet his work was still very thorough and ecological for the subject. In fact, part of Elman’s brilliance was the incredible speed with which he could solve a problem and race to the finish line.

Whether the problem was a phobia, stuttering, PTSD, whatever, Elman had an amazing knack for doing rapid work. If Erickson was a hypnotic battlefield strategist, Elman was a Navy Seal of trance.

But there’s much more to this discussion than the speed at which each one did trance work. There were also stylistic differences.

Dave Elman was the greatest master of what’s known as paternal hypnosis. In this style of work, the hypnotist is highly directive. The subject is essentially passive, while the hypnotist runs the show.

The upside to this is ... if the hypnotist knows his stuff (and Elman certainly did) the subject simply follows instructions and the hypnotist takes on the responsibility of causing the change to happen.

Using this approach, a dominant, highly-skilled hypnotherapist can clear away the non-essentials, quickly getting to the issue and treating it as a problem he must solve.

Erickson, on the other hand, was a consummate maternal hypnotherapist. Whereas Dave Elman would direct the subject, Milton Erickson offered options and often did so within a seemingly ordinary, but hypnotic conversation. The maternal approach is a gentler approach, but no less effective. Its focus is less upon “fixing things”, and more about engaging the client’s own unconscious resources.

In his later years, Erickson claimed that he was “much too directive” in his early days. Over time, he evolved a conversational approach that was almost impossible to resist. That’s because he would utilize naturally occurring trances, as well as induce trance below the threshold of the subject’s awareness.

Since Erickson believed that trance was essentially a learning state, his subjects would often solve their own problems after meeting with him. This makes complete sense if we adopt the model that everything we’ve ever learned, every movie we’ve ever see, every conversation we’ve ever had, is available as a resource. Erickson would use hypnosis to re-connect his subjects with their unconscious minds.

Modern neuroscience recognises this kind of therapy as being completely reasonable, since our brains are making new connections at an average of one million per second.

This takes hypnotherapy out of the realm of so-called power of suggestion, placebo effect, or mere belief, to something quite different.

It appears now, that hypnosis functions as an amplifier of human experience, and trance states let us change things very, very quickly.

So despite the obvious difference in methods, the bottom line is:
Both of these radically dissimilar hypnotists got amazingly effective results.

Erickson was a researcher who used strange methods

As a researcher alone, Erickson deserves a place among the great. His four volume Collected Papers of Milton H. Erickson MD belongs in every hypnotherapist’s library. The depth of Erickson’s study into the creation and utilization of trance states boggles the mind. His methods often seemed to defy reason, such as telling an overweight patient that she had to gain five pounds before she could lose any weight.

His "ordeals" were legendary. He would often tell his subjects to get outside and prune his rose bushes, or climb Squaw Peak, one of the highest points in the Phoenix Mountains, and they did.

Despite the strangeness of Erickson’s methods, they almost always worked.

How did Erickson do all of this?

It may be argued at this point that when we are discussing rose bushes, we are no longer talking about hypnosis. But Milton Erickson would disagree.

Although he created catalepsy and used time-distortion, amnesia and other classical hypnotic phenomena, Erickson largely worked through seemingly normal conversations, bringing in metaphor, dissociation, shifting focus, etc. He was indeed the father of conversational hypnosis.

Hence his technique evolved to offering options that the subject was free to choose between.

Erickson was a master at helping clients access their own resources while in trance. He evolved methods of hypnoanalysis and unconscious learning in which the clients essentially solved their own problems. This indirect and largely intuitive approach removed layers of trauma, discovering core issues that were then dealt with in numerous ways.

Elman was a stage hypnotist first

Now let's shift gears to Dave Elman, who was extremely directive in his methods. Having performed on the vaudeville circuit as “The World’s Youngest and Fastest Hypnotist” he developed numerous paternal methods of trance induction.

When Elman went on to teach doctors and dentists, he stuck with his rapid inductions and highly directive therapy.

Dave Elman’s work influenced many modern directive hypnotists, and aspects of his methods may be discovered without accreditation in many modern books. His unique approach enabled him to rapidly deal with deep issues, including stuttering, trauma, reducing pain, etc. He also created a means of quickly getting a subject into the deepest trance; the so-called Esdaile State, which had been lost for a hundred years.

So based on speed alone, wouldn’t it be best to use Dave Elman’s rapid inductions and therapy exclusively? Why not stick with a fast and a highly directive approach; especially since Elman had such an excellent track record?

This sort of questioning misunderstands the nature of Erickson’s work.

Again, it must be emphasised that Milton Erickson was a psychiatrist with a profound understanding of mental disorders. His knowledge and rapport skills were such that he could literally enter a schizophrenic’s model of the world.

Once he had built that bridge, the wealth of his hypnotic abilities would be applied. Erickson would bring healing through language by activating the patient’s own unconscious resources.

It must be noted that this kind of therapy takes time. It’s simply not possible to perform a rapid induction and tell a mentally ill subject that his problem has disappeared.

Perhaps this is why we see very few therapists able to work at the depth that Milton Erickson worked. This sort of therapy requires knowledge, experience, and consummate skill.

It’s just my opinion, but for the all the above reasons, I submit that it’s not an either/or situation, as in Erickson or Elman. It’s a both/and situation, where each of these geniuses offers us a powerful but different set of tools.

Are we to be maternal and indirect, offering options and activating the unconscious learning mechanism? Or are we to be paternal, directing the subject to the source of their problem and bringing immediate transformation?

Ultimately, direct and indirect hypnosis are on a continuum. With a combination of experience and proper training, a hypnotist can learn to be as indirect as possible, and as direct as necessary.

That sort of flexibility of behaviour is what leads to the greatest degree of skill. By balancing the incorporation of the subject’s unconscious resources with a powerful directive approach, a skilled hypnotist can produce the near miraculous.