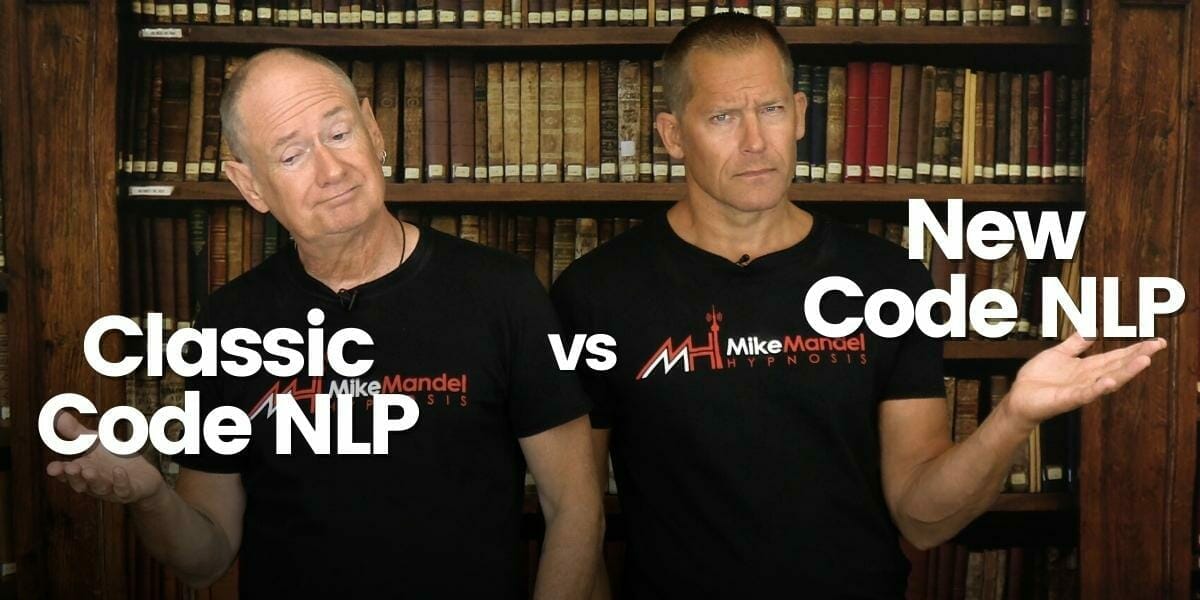 You must be, or you wouldn’t have bothered to read this.

You might have some working knowledge of the subject, or perhaps you’ve just heard that it can help you make some amazing changes in record time.

But did you know that there are two types of NLP that are similar, but also have some major differences?

This blog post will address those similarities and also the differences, and help you decide which one you want to learn.

NLP is short for the rather unwieldy name, neuro linguistic programming. It has been described as the science of personal excellence, a rapid form of therapy, etc.

NLP originated with Richard Bandler and John Grinder in the 1970s, when they observed and codified the patterns of three exceptional therapists: Virginia Satir, Fritz Perls, and Milton H. Erickson.

By distilling the verbal patterns down to their fundamental structure and adding keen observation of non-verbal patterns, Bandler and Grinder were able to replicate the therapists’ results with their own clients.

NLP provided the tools to model exceptional skill-sets in just about any field, from chess to carpentry to martial arts. However, since the first people modeled were therapists, NLP’s initial teachable patterns were all about therapy and personal change.

NLP spread like wildfire through the psychological community, and many full-time therapists trained in NLP techniques, began to replicate excellence, with their own clients and patients.

But as so often happens with pairs of geniuses, Bandler and Grinder had a falling out.

Richard Bandler continued to teach NLP in its mostly original form; although new patterns are being discovered and developed all the time. Today, it’s known as Classic Code.

Dr John Grinder took NLP in very different directions, even though it still contained much of NLP’s original form. It became known as NLP New Code, or simply New Code.

Which one is superior?

That really depends on who you talk to!

We believe that a sensible middle ground is best, and we draw from both styles in our live trainings and our work with clients.

In Classic Code, there is a lot of shifting of what are known as submodalities, which can be thought of as the basic building blocks of how our brains code information.

When we have an image of an event in mind, there will be certain aspects to the image that will be changeable. The picture might be close or far away, clear or indistinct, colour or grayscale, three dimensional or flat, etc. There may also be sounds or feelings associated with the image.

For example: Let’s suppose you have a colleague who intimidates you. When you think of the person, you check the submodalities connected with the image, and notice that you see him as huge and in vibrant colour. You also notice a tightness in your chest when you think of him.

You change the image by shrinking him down and muting the bright colours. In fact, you shrink him so small that he can stand on the palm of your hand! You imagine him standing there, small and faintly coloured, and even his voice is tiny and squeaky.

At this point, you check and discover that the tight feeling in your chest is gone, so you decide to leave the image like this now.

Amazingly, when you see the colleague again, he seems small and silly, and doesn’t intimidate you at all. In fact, it’s hard not to laugh at him.

This is just one Classic Code technique, and it goes far beyond this into other areas, like rapport, the Meta Model, reframing, the phobia cure, etc. However, submodalities are key to a lot of Classic Code.

In John Grinder’s work, there is much more physical movement.

By changing the client’s breathing and how they stand and move their bodies, change happens without having to track submodalities at all.

This is because New Code creates a brand-new high performance state, and then puts it where the client wants it to be.

In our example of the intimidating colleague, a New Code practitioner may create a powerful state in the here and now. She would then coach the client to think of that person while slowly and deeply breathing.

Amazingly, the client would get a feeling of empowerment when he ran into the problematic person. That’s because the technique grafted the high-performance state into the right context. Just seeing the nasty person was enough to fire the powerful state.

Original NLP is mostly static. Whether fixing a snake phobia, or working with a client’s planning for the future, Classic Code typically has the subject sitting still and running programs in his head; and this is very effective.

On the other hand, New Code contains lots of body movement. To help a client fix a problem or install a new behaviour, a practitioner may have the client walking back and forth to build a powerful state. In the Walking With Grace and Power intervention, problems like nail-biting, fear of the dark, or negative beliefs, simply disappear.

Even in something as archaic as the original NLP swish pattern, a New Code variant has been developed.

The original swish involved blasting an imagined picture of the problem state into pieces. In its place, the client would have a vividly imagined desired state; a powerful way to change feelings or behaviours.

The New Code swish uses the hands in a dynamic way; gripping the image and shrinking or moving the internal pictures to the desired state.

So as you can see, the two NLP styles, or streams, are quite different from each other. Classic Code is typically run in the mind, while John Grinder’s New Code involves movement too.

So it’s really a matter of what appeals to you most.

On the other hand, if the movement aspect sounds more attractive, then by all means study New Code.

Once you learn either branch in depth, you’ll probably want to learn the other style too, as we did. We find this provides the greatest flexibility of behaviour, which is always a good thing.

Both styles of NLP do work, and are very powerful when applied to practically any area of life.

So why not jump in the deep end, and begin your NLP journey now? In fact, we’ve made it really easy to get started! When you purchase NLP Essentials, you’ll discover just how simple NLP is.

Each of the videos are bite-sized, making them easy to understand and remember. That means you’ll effortlessly retain the information and can study the course at your own pace.

The best part is that NLP Essentials will only take you about 6 hours! You can become good at NLP while eating your lunch, taking a coffee break, or going for a walk! Also, did we forget to mention that we’ve included a certification?

That’s right! When you are ready, check out NLP Essentials by clicking this link!