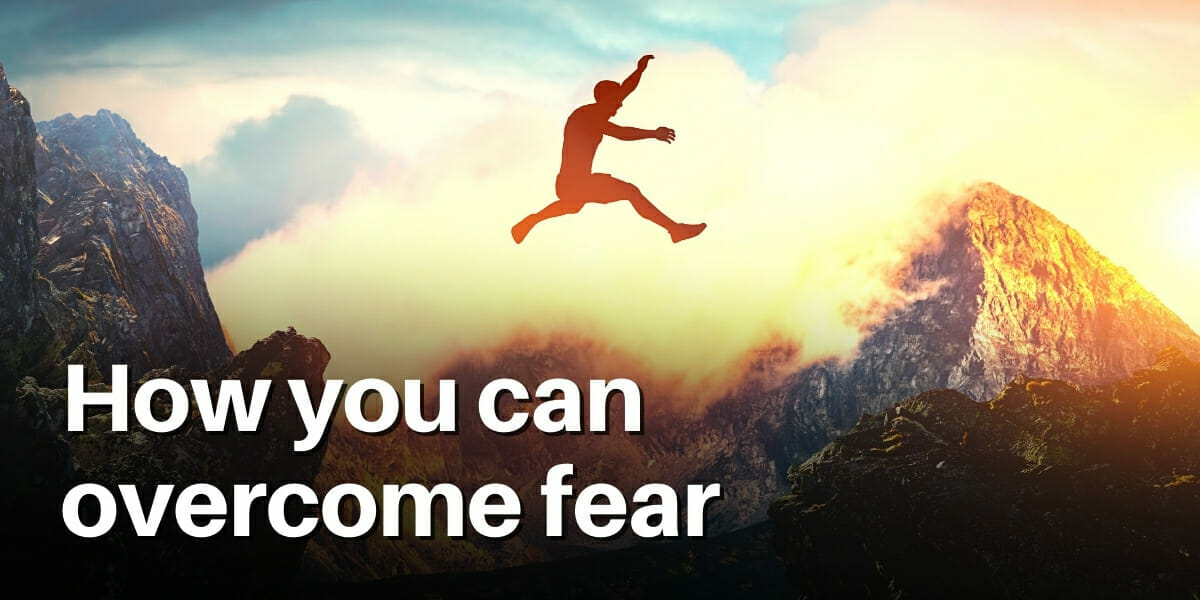 In this blog post - you are going to learn about what fear is and how you can easily overcome it. Now we don’t mean that you’ll magically stop being afraid of anything. Nor do we mean that we have some mystical woo-woo secret formula that will make you unable to get scared.

Because the truth of the matter is, there is no secret woo-woo formula…

Right?! We totally get it. It would be awesome to just be able to go down to the ole’ Quickie-mart and pick up a bottle of “Fear-Me-Not.”

So instead of relying on some type of magical potion or ancient voodoo, what if instead we offered you something way more reliable than snake-oil?

If you enjoy the kind of high-quality content we create for this blog, you'll most definetely love the Brain Software Podcast. The BEST hypnosis, NLP and personal development podcast on the internet. Check it out down below. Remember to like, subscribe and leave us a comment!

What is fear, exactly?

LOOK OUT BEHIND YOU!

Phew! Did you get scared?

More than likely, probably not; unless you happen to have a lot of anxiety around having irrational fears. In that case, WATCH OUT, AGAIN!

Ok, that was close. We swear something almost got you!

There is also a huge difference between being afraid of something that causes feelings of anxiousness and having a phobia. We’ll get to that in a moment.

The real fear though, is the fear of fear itself! Or something to that effect.

In reality, everybody is afraid of something because it’s healthy to have some fear. The problem most people have when it comes to fear is when it becomes absolutely unnatural and disruptive to their lives.

These types of disruptive fears can include:

To put it another way, there are good fears and not so good fears.

It’s perfectly natural to have a fear of falling off a ladder if you are at the very top rung of one and it’s swaying back and forth, turning you into some type of quasi-masochistic flag. It’s unnatural though to have a fear that garden gnomes will bite your legs if you walk through the overgrowth at night.

Is it really a fear or an anxiety?

When you really think your life's in danger then you are experiencing a true fear. This is the kind of fear that has kept you alive thanks to the evolutionary biology of our ancestors. If you knew that a lion could be nearby while out hunting, then the fear of dying to a lion is a true fear.

Unfortunately that same evolutionary biology hasn’t caught up with our modern day civilization. This means the same mechanisms for fearing the lion happen while you are watching a scary movie, having a difficult discussion, or speaking in public!

So what’s the difference between having a true fear and a lot of anxiety?

Do you lie awake at night ruminating about what’s happened during the day or about what could happen tomorrow or next week? Do you start asking “What if?” questions about your life, financial situation, or whatever else you might be stressed about? Are you concerned about those damn garden gnomes?

If you answered yes to any of the above questions, it’s probably an anxiety more so than it is a fear.

When you are really afraid of something, you’ll know it for sure. For starters, you might notice the physiological effects of adrenaline coursing through your veins. Those types of symptoms include heart palpitations, severe perspiration, and even the unconscious urge to either fight, run, or freeze in place.

That’s not to say you can’t have a combination of both, however the easiest way to decipher whether you are anxious about something or whether you really should be afraid is pretty simple.

Ask yourself, “Is it rational, or irrational?”

Rational fear is easy to understand. Like we mentioned before, standing on the top rung of a really tall ladder that’s swaying can cause a fear of falling off and getting hurt. Being in danger, like the loss of life-or-limb, are surefire rational fears.

Irrational fears, like the garden gnomes, can be thought of more as anxiety. You may notice some type of physiological changes, like butterflies in your stomach or sweaty palms, but in reality, the anxiety is a concern of “what if” more so than a real sense of danger.

One of the common traits about both anxieties and fears is that they are considered analog, meaning there is a spectrum. Imagine analog as 0 - 10, where anything in between 0 or 10 is part of the spectrum.

This means if you have anxiety around paying a bill, the closer the due date gets the more anxious you might feel. Fear is the same way. If you had a fear of the lion killing you while you got near the watering hole, the feeling of fear wouldn’t start creeping up until you started getting closer to where the lion might be.

So What About Phobias?

Phobias are interesting because they can be both rational and irrational - yet they operate the exact same. Just ask somebody who has a phobia!

That’s because phobias are considered a digital issue, meaning they are either on or off. In the case of somebody who might have a snake phobia (called ophidiophobia), unless there is a snake around and they notice it, you probably wouldn’t know they had the phobia.

As soon as that person saw a snake though, BANG, you would see them run for the hills like a bullet shot out of a gun. As soon as they were safe again though, they would act like everything was just fine.

How to overcome fears, anxieties, & phobias

When it comes to the frustration of having a life-debilitating phobia, fear, or anxious feeling that you won’t seem to go away, there are plenty of ways to calm down in the moment.

One of those ways is by using an ancient acupressure artform called Jin Shin Jyutsu. This simple technique can help release tensions inside the body through various finger holding positions.

The index finger, specifically, is considered the “fear” finger. There is a simple 2 step method with Jin Shin Jyutsu that you can start using right now to help calm your fears.

If you are feeling anxious, then repeat the steps above but instead grip your thumb because the thumb is the “worry” digit of the hand.

Note: Mike suggests doing this with every finger, your thumb, and the palm of your hand right before bed to get a really good night’s sleep!

If you are looking for help with a phobia, this is where hypnosis really shines. Any competent hypnotist or hypnotherapist will be able to use a technique called the Rewind technique.

The Rewind technique is exceptional at helping a person overcome their phobia by stripping the emotion from the unwanted experience by running it in reverse. There are more steps to it than just that, but the overall premise is the same.

If you are the kind of person who would love to learn even more about Jin Shin Jyutsu, energy tapping, or how to use language to transform your life, then you would love our Personal Growth Membership.

Inside the Personal Growth Membership, you’ll discover ways to use language to transform your life, inside and out. You’ll also discover an incredible 6-step energy tapping regiment that Mike created through years of research and study that can help eliminate unwanted emotions FAST.

In other words, it’s the only membership you’ll need to become an even better you.