How To Deal With Aphantasia in Hypnosis 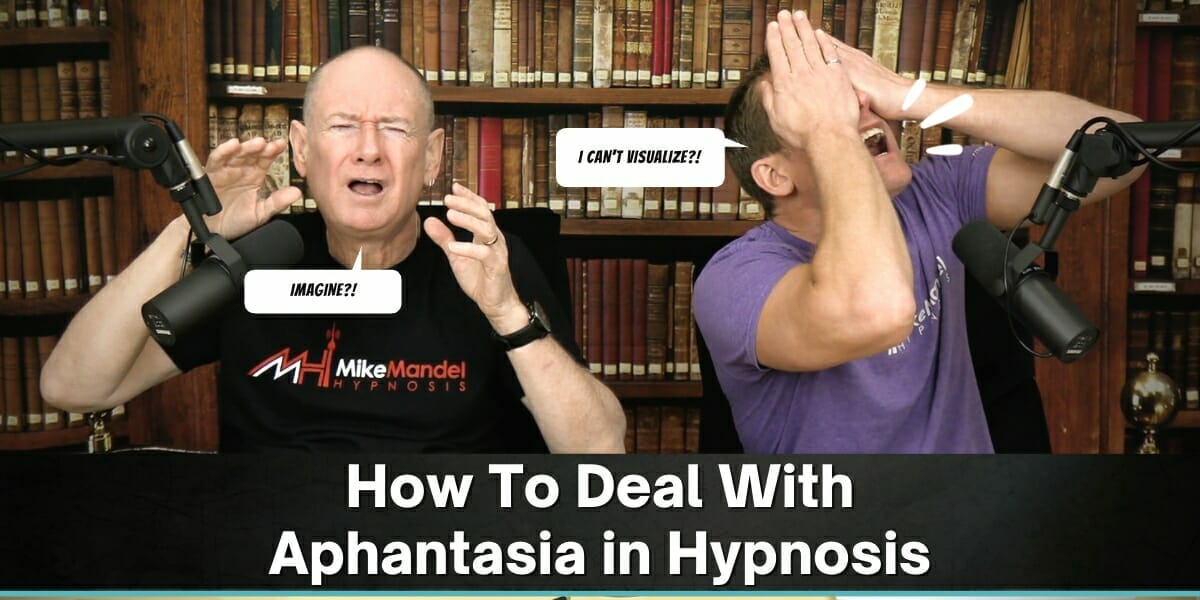 It's fairly common for some people to struggle with visualization exercises. As hypnotists and hypnosis trainers, we often encounter individuals who have difficulty imagining a particular thing in their minds.

However, some go as far as to claim they suffer from a rare clinical condition known as aphantasia.

People with aphantasia are described as unable to voluntarily create mental images. Without this resource, they’d be incapable of following simple instructions involving imagination, particularly visualizations.

If that were indeed the case, it would be a real concern. Visualization being such a useful tool and often an integral part of hypnosis (and self-hypnosis) work, the inability to visualize would be a great hindrance to anyone hoping to do some kind of change work.

Most of the time, though, aphantasia isn’t a real issue, but a misunderstanding of what we actually hope to achieve with a visualization.

Visualization Is Not Hyperphantasia

Just because it’s called visualization, it doesn’t mean you can actually see anything.

A large number of people seem to expect visualization to be as realistic as watching a movie on a screen. This ability is called hyperphantasia by scientists, and it’s just as rare as aphantasia.

The truth is very few people can actually create mental images as clear and vivid as actual vision. If hyperphantasia were necessary for hypnosis work, we wouldn’t be able to help many people.

If, like us, you’re interested in using hypnosis to change your behavior and improve your life, rest assured that your regular visualization abilities will suffice.

Do I Have Aphantasia?

Even after learning that a below-average performance at visualization is good enough for hypnosis, a few people will insist that they still can’t visualize.

We can safely assume that at least 90% of these people still have unrealistic expectations of what visualization is supposed to be. In that case, we’ll suggest a couple of exercises to determine once and for all, whether they have aphantasia or not.

It’s really simple. Without leaving this page, follow through with these exercises:

Guess what? If you were able to follow through both of these exercises, you’re able to visualize. It’s as simple as that.

Being able to visualize is nothing to brag about. You probably weren’t able to see neither your face nor the outer walls of your residence as clearly as you can see these words on your screen. If you were, then congratulations. You possess a unique ability.

However, those who weren’t able to can still benefit from visualization in hypnosis. Whatever visual representation your mind generated in order to answer those two questions can be effectively used in a hypnosis or self hypnosis -  and you’ll get the exact same results as someone who has a movie theater room inside his brain.

To solve this problem, you can run them through the same exercises you just did. After they’ve successfully described their faces and color of their home, explain how that’s all the visualization you truly expect. That will work most of the time.

There’s an elegant way of bypassing the visualization problem when a client seems dead set on maintaining the belief that they can’t visualize. Just ask them a simple question:

“If you could visualize, what would it be like?”

Very often, they’ll start describing what they think a visualization is supposed to be.

As you may have guessed, that’s a visualization in and of itself, but they still may not be convinced. No problem. In that case, you can simply say:

“Then pretend you’re visualizing and go with it.”

The visualization will work whether they think they’re visualizing or not. If you tell them to pretend, they’ll be satisfied that they’re not expected to actually visualize, while at the same time following your instructions perfectly.

As for self hypnosis, it gets easier with practice. So if you’re still struggling with not being able to visualize as well as you’d like to, pretend you’re visualizing and keep pretending until you forget that was even an issue.

If you wish to learn more about self hypnosis and gain a variety of skills you can apply to yourself, Easy Self Hypnosis is the course for you. We especially designed this course to be an extremely valuable asset to anyone wishing to get better at self hypnosis, whether a total beginner or already experienced.

At MMHA, we teach hypnosis from the very basics to several highly advanced techniques, making it the ideal program for hypnotherapists, stage hypnotists and people who want to develop hypnotic communication skills.