Dealing With False Memories in Hypnosis 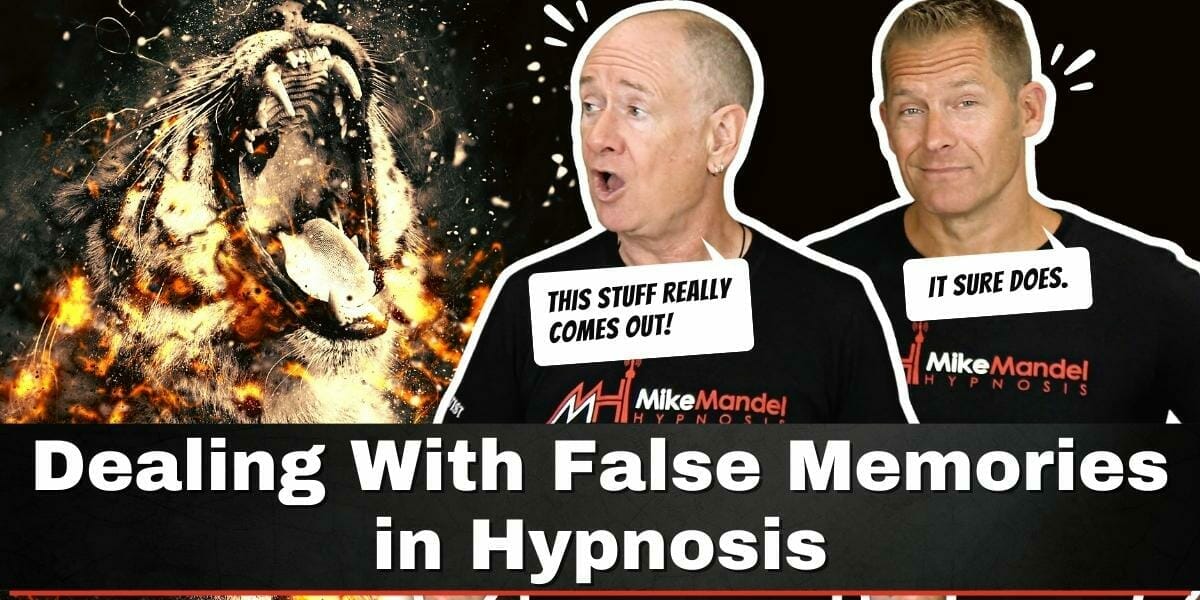 When talking about hypnosis, age regression hypnotherapy and false memories, we need to make one thing very clear first: all memories are false to some extent.

With decades of experience as a police trainer and forensic hypnotist, Mike Mandel has seen this happen countless times. When interviewing multiple witnesses to the same crime, the police will, more often than not, get differing descriptions of the very same event from each witness.

But how can that be? To find out, read the rest of this blog post or simply watch the video below.

It’s called False Memory Syndrome (FMS) when an individual relates events connecting to a traumatic memory that are objectively false. Many such events have been extensively described in medical literature.

In one famous case, a woman who had previously been a victim of sexual violence was casually watching TV when a sad realization occured: the man on screen at that moment was the criminal who had raped her several years before. She immediately recognized him and became fully convinced she had found her abuser.

The man in question was a famous psychologist who often made televised speeches and gave interviews to many relevant media channels. Luckily for him, it was proved that at the exact time when the woman was being assaulted, he was on live television giving one such interview.

This was absolutely not a case of false accusation. The victim genuinely believed she had finally found the man guilty of sexually abusing her. But unknowingly, she was experiencing par amnesia, or False Memory Syndrome.

But why him? How could simply seeing this random guy on TV create such a horrible distortion in that person’s mind?

The most logical explanation is tragic, but reasonable. During the time when the crime was being perpetrated, there was a TV somewhere in the environment broadcasting the very interview that served as the psychologist’s alibi. And in that moment of extreme emotional distress, her mind registered the psychologist's face, which became associated with that traumatic experience.

Can you now understand why it can be so difficult to work with memories of any sort? That’s because of one inconvenient fact…

All Memories Are False

Let it be clear: we are not psychologists or MDs. We’re hypnotists, unconscious coaches and agents of change. We do not mean to diagnose anyone with “False Memory Syndrome”, nor are we qualified to do so. The point of this story is simply to showcase how memories are usually unreliable, and can be easily manipulated.

That’s because false memories don’t occur with just traumatic experiences. The inconvenient truth is, as modern neuroscience shows, all of our memories are false to some degree.

Some are only missing details. Others have had those details distorted or replaced by things that weren’t there at all. Some can even be completely fabricated. And tragically, most of them are simply deleted.

The memories we tend to keep are those that are either emotionally charged, or have been extensively revisited. Don’t we all still remember something we learned at school that’s completely useless nowadays? The same happens when we are emotionally impacted by a certain event.

That’s why the police, as Mike points out, often get different versions of the same story. Each person has different perspectives, belief structures and emotions attached to the events in question. These things act as filters in our minds, and our memories get registered accordingly. For each of us, that version of reality becomes the truth.

Even though false memories are a natural occurrence, hypnosis can intensify them.

Not surprisingly, hypnotic age regression is where they’re most likely to happen. In truth, however, all hypnosis procedures can create this phenomenon depending on the circumstances.

Not just hypnotists, but any kind of therapist can bring about distortions in a person’s memories simply by asking the wrong kind of questions about a person’s past in the interview process. In this case, the false memories happen even without a formal hypnotic trance. This serves to show how powerfully positive (or destructive) this mechanism can be.

The bottom line is: a suggestion made in an emotionally charged state (or a hypnotic trance) can create a false memory. Especially if that suggestion comes in the form of a leading question with details that imply something happened, when in fact, it didn’t.

How To Use Clean Language to Avoid False Memories

There is a way around this. By asking what are known as clean questions without biases or implications using Clean Language, the chances of simple interview questions causing dangerously false memories, becomes much less likely.

How To Use False Memories for Your Benefit

So far, you may have formed the impression that false memories are always terribly dangerous and bad. But surprisingly, intentionally creating a false memory can have positive results in one’s life.

One way, is to simply change the memory’s Submodalities. By revisiting your memory in a relaxed state or a light trance, you can dissociate from it and rewrite the emotions that are attached to it. In this case, you’re not so much changing the memory’s content, but the emotional meaning it has.

But it’s possible to go even further. Creating an entirely fake, but empowering memory, can de-potentiate the effects of a real, but harmful memory. You do this by having them exist in parallel with one another.

They exist in parallel because we don’t replace a memory with another. That’s not what this is about. Instead, because the mind can’t differentiate reality from vivid imagination, they co-exist side by side. This simply gives your mind the option to choose the more resourceful memory, according to the situation.

Having been horrendously bullied as a child, Mike carries a number of traumatic memories of being harrassed by other kids. Notice I said he carries, not carried. All the memories are still there. He’s well aware he got beat up numerous times at school, and those memories are still entirely present in his mind.

But here’s the twist: As an adult, professional hypnotist and British Jiu Jitsu 3rd-degree black belt, Mike was able to go into a trance and revisit those memories in order to re-write them. In his mind, he created new versions of these experiences where he easily defeated the bullies, instead of getting beaten by them.

Mike has no illusion that this was what actually happened. He’s fully aware of what actually occurred in those events. As I said, both memories now exist in parallel. But because the unconscious can’t tell the difference, it doesn’t matter. It can simply choose the most resourceful version. In this case, it’s free to choose the one where he wins against the bullies, hence blocking all the negative emotional charge associated with the original memory.

To wrap up, let’s give you some homework: think about what memory from any time in the past can you go in using Self Hypnosis and re-write? You can make this even more effective by using other techniques taught for age regression hypnotherapy.

How to do Self Hypnosis …The Easy Way

By using self-hypnosis, you can apply the techniques we described in this blog post and many more. To learn self hypnosis quickly and easily, our Easy Self Hypnosis Course is the way to go.

And if you wish to become a full-fledged hypnotist and help other people with your skills. Our flagship online hypnosis training, the Mike Mandel Hypnosis Academy, is ideal for you.

Click here to get a 14-day free trial now.