What Happens When a Hypnotic Induction Fails? 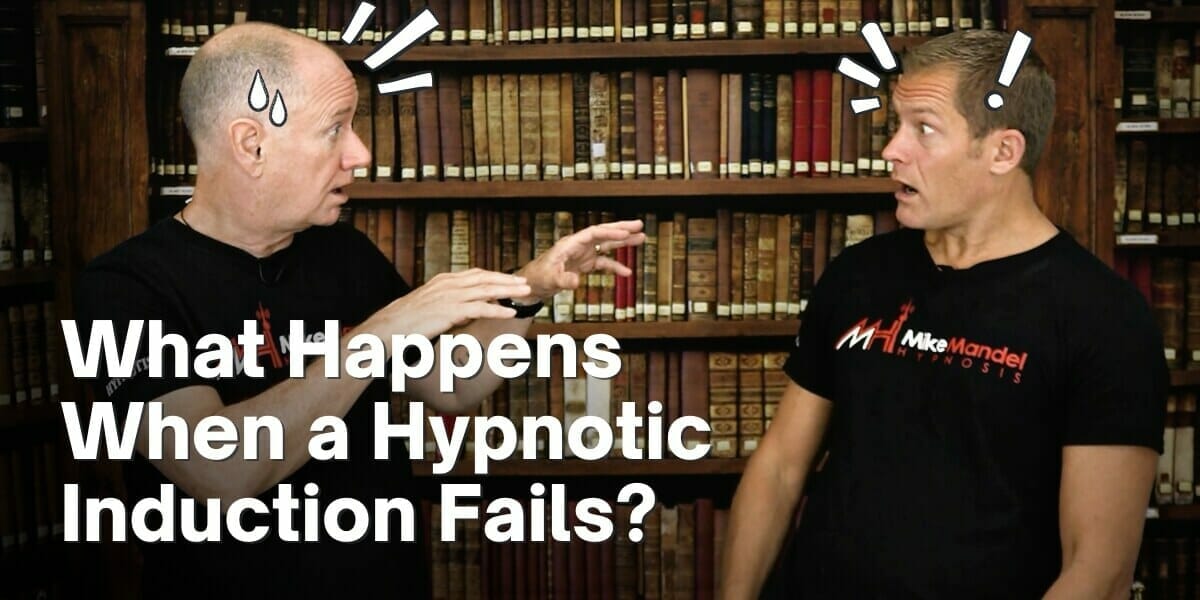 What if you fail? You’ll look bad and your client will know you’re a crappy hypnotist, right?  Fear not, my friends. You won’t fail. We have your back.  Keep reading.

That’s perfectly normal for stage hypnosis. It happens because stage hypnotists take (more or less) a “shogun” approach to hypnotic induction.  They don’t have time to go around individually hypnotizing every subject with a tailored approach.  So they pick methods that have a pretty good hit rate.  They keep the show moving quickly so it’s not boring.

Sending someone back to the audience is not failure. It’s focus. The hypnotist is focusing his attention only on the subjects that will make for the best,  most entertaining show.

But what about hypnotherapy? What if your induction seems to fail when you’re working with just one client?

It only seems like it’s more difficult because there is only one client at that moment in time. And so if the induction doesn’t seem to work … you’re screwed, right?

Never Let Them See You Sweat

Before we go any further, here’s a short commercial from the 1980s. It’s for an anti-perspirant called “Dry Idea”. This was a very famous commercial back in the day.  This message applies to hypnotists too.

“Never follow a better comedian. Never give a heckler the last word. And no matter how badly a joke bombs, never let them see you sweat.”

That final piece of advice … never let them see you sweat … it’s great advice for hypnotists because you’ll never let on that something you’re doing is not working.

You’ll never say to your client, “Ok, that’s not working. Let’s try another induction.”  That would be an epic way to appear to be lacking confidence or skill.

Can you imagine if a comedian said, “Ok these jokes are not working tonight.  Let me grab another set of notes for the rest of this show.”

Uggg. What a disaster that would be.

Live and Breathe the Mandel Triangle

Let’s imagine you’re doing an induction and it’s just not going where you expected. You’re calibrating the client and the response is just not what you normally get.

You’ll behave as if what’s happening is entirely perfect. But behind the scenes, you’ll switch gears and do something else. The same principle applies to foolproof suggestibility tests.

This is exactly what we mean when we talk about the Mandel Triangle , where you must convey confidence, be congruent and use the power of intention.

In our live classroom we usually teach an induction called “Breathing with the Hand”. This is an induction where we setup catalepsy so the client’s arm is gently floating in front of them. Sometimes, in the classroom, the catalepsy fails because the student (NOT a real world client) is expecting relaxation.  So instead of a floating arm, their arm drops to their lap.

It would be a disaster to say “Oh, that’s not what you’re supposed to do!”

So the properly trained hypnotist just goes with it as if it’s exactly what was supposed to happen.  You might say, “That’s right  … and as your hand reaches your lap it’s the simplest thing in the world to go deeper into trance.”

The world is your oyster. You can seamlessly just shift to another induction and your client will never know anything didn’t go perfectly.

That’s why we teach hypnotists to learn the principles of hypnosis, not how to read scripts at their clients or do specific techniques that must neatly fit into situations.

Learn the principles and you’ll never let them see you sweat.