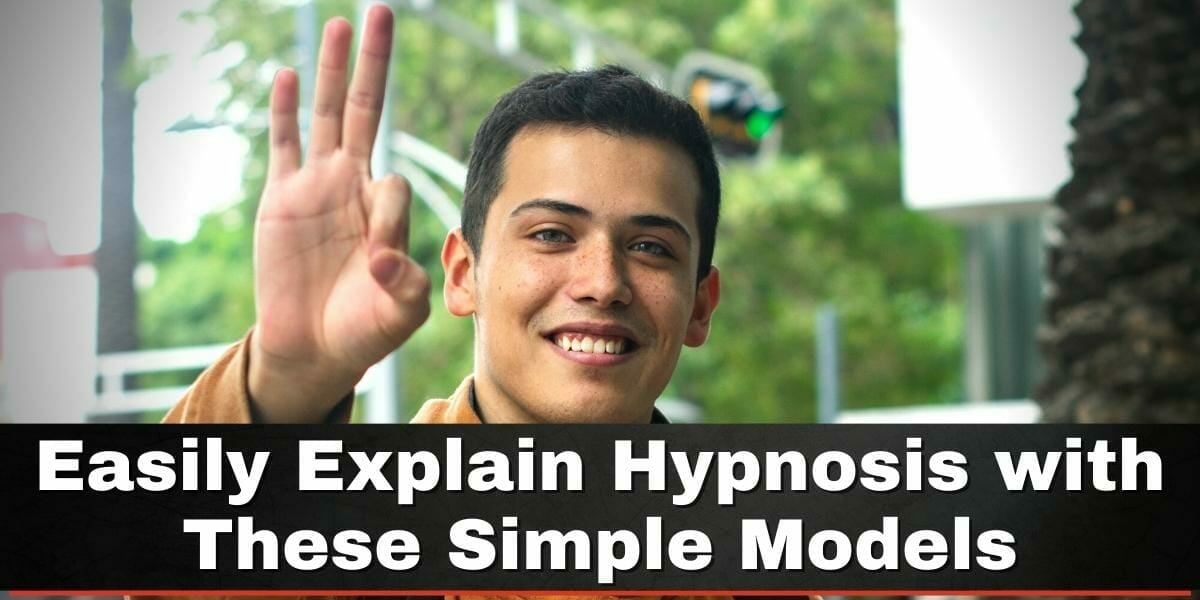 After doing hypnosis full-time for more than 45 years, I can tell you that nobody agrees on what a hypnotic trance is.

But if you keep reading, I’ll show you some of the more interesting models of hypnosis, and let you make your own decision…

First of all, let’s remember that a model is just a way of looking at something. It isn’t necessarily real or true, any more than a map in a subway is the subway itself. A model is a way of thinking about things that makes it easier to understand a topic.

So what are some of the models of hypnosis in use today?

In this model, your conscious mind is everything you’re aware of right now. It includes your thoughts and feelings, and all that you notice around you.

Your unconscious mind is quite literally everything else, meaning all the stuff you’re not thinking about at this moment. But there’s a catch…

As soon as you think of something, or notice something that you weren’t aware of, it becomes conscious.

American psychologist, George Miller, wrote about this in the mid 20th century. He called it the Magic Number 7, plus or minus 2. And by this, Miller meant that you can only hold about 7 pieces of information in your awareness at any given time; some people a couple more, and some a couple less.

Everything else is way down in your unconscious mind, until you notice it and focus upon it. Then it immediately becomes conscious.

An Attic and a Flashlight

To add to this model, let’s imagine an enormous attic, filled with all kinds of interesting items, sort of like an antique store.

Imagine the attic is in total darkness, which means that you need a flashlight to see what’s in there. This corresponds to your unconscious mind; at least in this model, and as you’ll soon see, there are other models.

So you go in with a flashlight, but it’s a very special kind of flashlight. That’s because it can only illuminate about 7 things at once, no matter how big or small the items are. As you look around, the flashlight brings items into the light, and this corresponds to the model that George Miller came up with.

Interestingly, as you move the flashlight around to see what’s there, as one new item becomes illuminated, an item that’s in the light, slips back into the darkness of your unconscious mind.

Many believe that hypnosis functions like that. People are typically wide awake and aware, but there’s a wealth of information stored in that attic, including every book you’ve ever read, every movie you’ve ever watched, and every conversation you’ve ever had!

And this is what we access, when we’re in hypnosis; the vast wealth of the unconscious, which when we enter a trance state, permits us to make incredible changes in our lives.

But there’s another aspect to this, which the attic model doesn’t address…

Imagine a busy nightclub with a lineup of happy people wanting to get in. Obviously, the club can’t let just anyone in, or pandemonium would result. So to keep the club functioning well, the management hires a doorman who keeps an eye on anyone attempting to enter the club.

And that’s where hypnosis comes in. In your normal waking state, your critical faculty is on guard. But a skilled hypnotist is able to distract, confuse, or gain the trust of the doorman, so he lets the hypnotist in.

The Beach Ball, the Coaster, and the Dime

The critical faculty appears in a lot of hypnosis models. Some hypnotists prefer to think of it as the firewall in your computer, which prevents unauthorized entry.

And then we add the third part of the model, which is a nice soft knitted coaster, like you set your coffee cup on so it doesn’t damage the table. This coaster sits between the beach ball and the dime, and this coaster represents the critical faculty.

When a person goes into a hypnotic trance, the coaster is removed, allowing access to the unconscious mind.

American psychologist Raphael Rhodes had his own model of hypnosis, which he called PRE or psychic relative exclusion.

This does not mean preventing your clairvoyant aunt from attending Christmas dinner!

PRE is the concept of the brain possessing two minds, which essentially corresponds to the concept of conscious and unconscious minds. Rhodes did not include the critical faculty, but believed that in hypnosis, one mind would recede and the other would become dominant, although both minds would always be present to some degree.

Some researchers have adopted a model based on the brain hemispheres. They believe that, for a typically right-handed individual, the left hemisphere of the brain, which governs details, language, numbers, and logic, is most active.

The right hemisphere is more involved with concepts, color, music, symbolism and metaphor. When trance occurs, the left hemisphere settles down, and the right hemisphere becomes more active. There is also more communication traveling through the corpus callosum, the band of 200 million fibers between the hemispheres.

Other hypnotists prefer a different model that they use to explain hypnosis to their clients, and it’s based on a metaphor. In this model, the unconscious mind is symbolized by a pond of still water, and everything below the surface is unconscious.

Above the pond, is the sky in bright sunlight. This represents all the current information in the conscious mind. The surface of the water where it touches the sky, is once again, the critical faculty.

A layer of mist or fog over the surface of the water would blur the distinction between sky and pond, and would indicate hypnotic trance, at least in this model.

(Read: Hypnotic Metaphors and How To Use Them)

There are loads of models that attempt to explain hypnosis. But as we stated earlier, a model is not necessarily reality, although it certainly can be. Adopt a model that makes sense to you.

And if you want to get from basic understanding confident mastery, join us inside of the Mike Mandel Hypnosis Academy.  We’ll teach you, step by step, how to get really good at this stuff while having a total blast.