Does Hypnosis Work? How Do You Know? 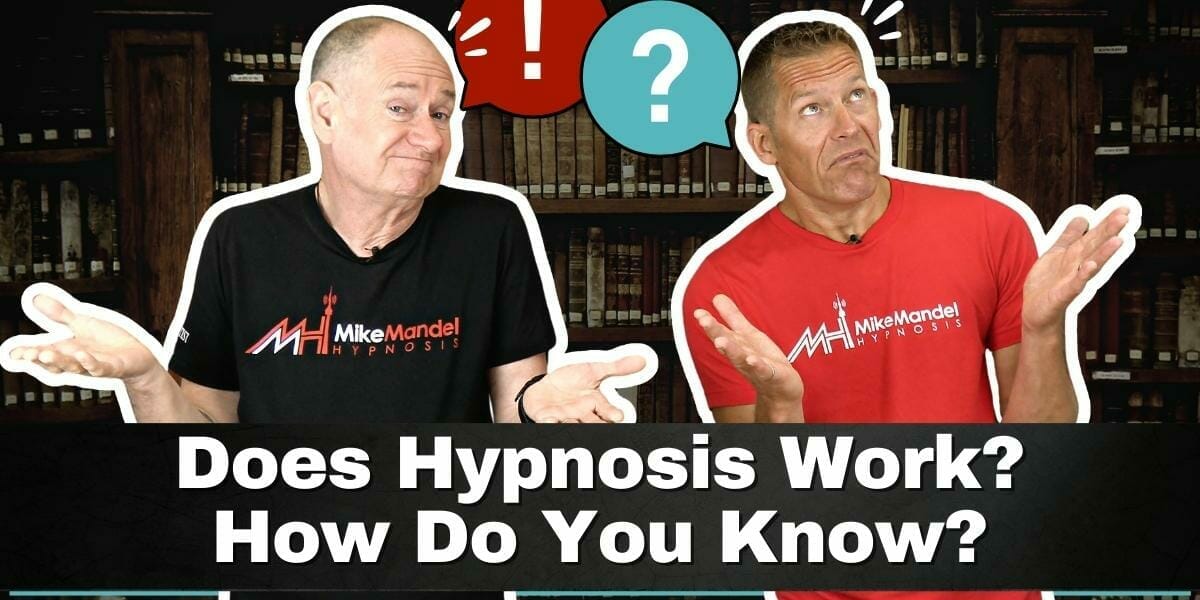 There are lots of people considering checking out hypnosis as a possible solution to their problem, but there’s often an underlying skepticism: What if it doesn’t work?

In this article, we’ll explain that hypnosis DOES work, and how we KNOW that it does.

Some people say they just don’t believe in hypnosis, but that’s a bit like saying they don’t believe in dentistry or psychology. That’s because hypnosis and hypnotherapy have been recognized as reputable medical modalities in North America and Great Britain, since the 1950s. So that takes care of the credibility aspect.

Valid for Treatment and Onstage

The medical community knows that hypnosis works, even if most of them don’t practice it themselves. In fact, in our opinion, the greatest hypnotist of all time was psychiatrist Dr Milton Erickson. Despite being paralyzed by polio and in a wheelchair, Erickson was legendary for his mind-blowing hypnotic work. Even what appeared on the surface to be a simple conversation, could be life-transforming for his patients.

And then of course, there are stage hypnosis shows, where volunteers do absolutely ludicrous things. When they return to the audience, their friends will often remark that they observed them acting completely out of character. On other occasions, a quiet and timid person might leap to his feet, and make an impassioned speech, amazing everyone by transforming into a world-class orator; providing even more evidence that hypnosis works.

But to be technically accurate, hypnosis doesn’t really work at all…It’s the subject who does all the work! It’s better to think of hypnosis not as a thing, but as a set of procedures that permits a person to make powerful changes. And in hypnotherapy, these procedures begin when a client walks through the door of the treatment room.

Since some people are apprehensive about hypnosis, a good hypnotist or professional hypnotherapist will greet the subject warmly, establishing confidence and competence. He will dispel any fears or false beliefs the subject may be carrying, and engage in a discussion on what will happen in the session.

By taking the time to get to interview and listen to the client, the hypnotist does much to ensure that hypnosis “works” for him. In fact the entire session is structured to move toward a favorable outcome for the client. A good hypnotherapist knows she doesn’t have any powers. It’s really about the client, who must be guided by the hypnotist to go into trance.

It’s no different in a hypnosis stage show. The hypnotists who get the best results and create an entertaining show, will do an adequate pre-talk or lecture to encourage volunteers to participate. He might do a mentalism effect first, which although unrelated to hypnosis, establishes him as a performer of note, and builds confidence. Naturally, an entertaining show means that the hypnosis has worked.

But it’s still the hypnotic subjects who DO everything. It’s as though they’re musicians in an orchestra. And it’s the hypnotist who acts as the conductor, guiding the participants to participate in their own hypnotic trances.

But Will It Work for Me?

Despite attempts to educate the general public, there’s a prevailing mythology that some of us are so smart or so strong-minded, that we simply cannot be hypnotized. The reality is quite different! Remember: It’s not the hypnosis or the hypnotist that works, it’s YOU.

Which naturally means that if you have a strong mind, you’ll be an excellent subject if you choose to. But again, it’s you who does the hypnosis. So if you don’t plan on resisting yourself, there’s no reason why it won’t work.

Many of the doubts that people have come from watching hypnosis onstage, or as presented on television or in films. Hypnotic entertainment is fascinating, but bears little resemblance to hypnosis in the context of a therapist’s office.

Sometimes a person will see a hypnotist or hypnotherapist for the first time and say something like “I want to go into hypnosis, but I don’t want to quack like a duck!” This is part of the mythology around hypnosis. It implies that the hypnotist is exerting his or her will to MAKE the subject do something or other.

But hypnotherapy is not like that at all. Most people don’t realize that hypnotic trance and behaviour while hypnotized is all about context. A stage is a great context for volunteers to act silly, but a therapist’s office is a completely different thing. There’s no way that someone who went to a hypnotist for pain management would start clucking like a chicken; even if it was suggested. They would either come out of trance, or simply refuse.

The proof of the pudding is the amazing results people get from hypnosis sessions. We’ve seen people set free from years of trauma, phobias removed, burns healed, fear of flying cured, and chronic pain greatly reduced.

A skilled and well-trained hypnotist can help you reprogram your life, help you with sports or public speaking, and a long list of other benefits.

And that’s what we produce at Mike Mandel Hypnosis Academy: Skilled and highly trained hypnotists. Whether they’ve trained with us online, or in one of our classes in Toronto, Las Vegas or London, they help make the world better.

One person at a time.