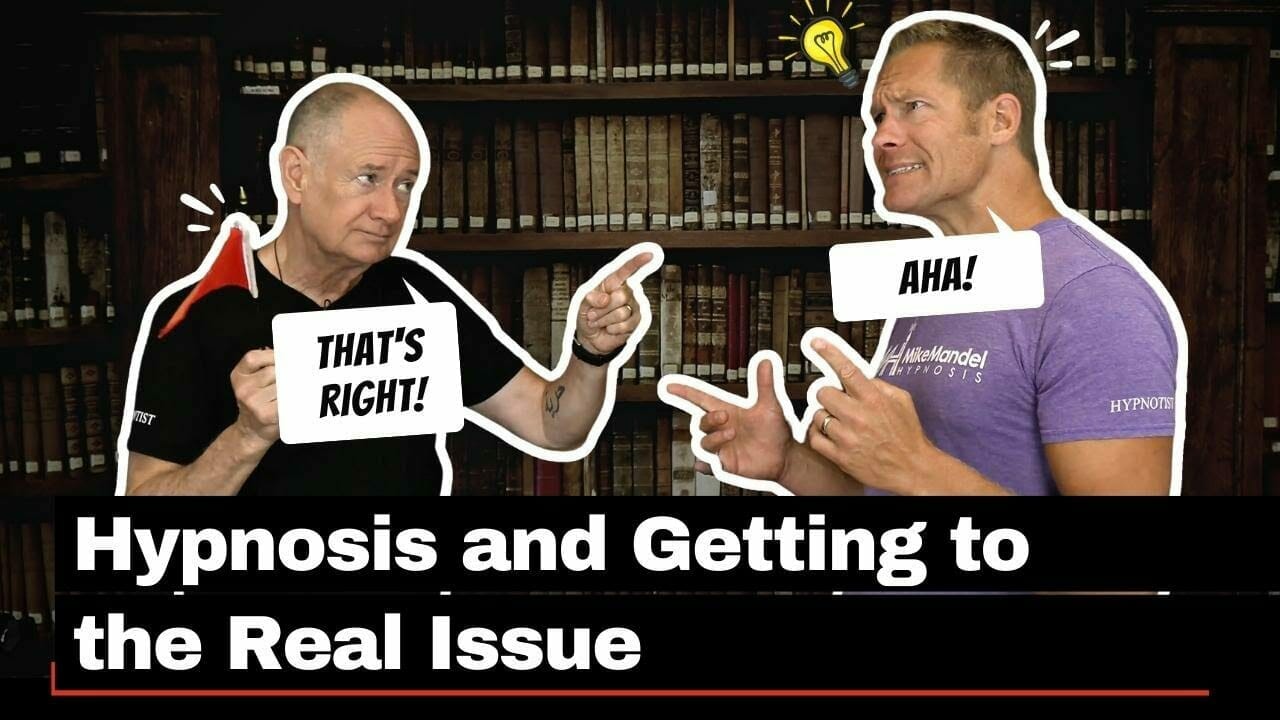 “The issue is never the issue.” At least that’s what many hypnotherapists say.

But what is the key point to keep in mind when getting to the real issue with a client?

In this article, we’ll talk about:

The Target State - What Do They Want To Achieve?

That’s not helpful. Focusing on what they don’t want does nothing but keep them stuck in their present state. So the first thing to keep in mind is they have to determine a target state.

What do they want? To feel more confident? Outgoing, perhaps? Because that’s what’s really going to move them toward the desired outcome.

The target state must be something that they control. You won’t work with a client whose target state is for his boss to stop harassing him or his colleagues to stop bullying him. Focus instead on what change they can make within themselves to solve the issue.

In this example, an assertive posture and a confident attitude are what they should be looking for. No changes can be made to your client’s boss or co-workers, but the way he responds to their insults and abuses can make all the difference.

Put Them in Control

If it’s their responsibility to change and not other people’s, then the solution must come from them as well. The target state must be determined by the client, not the therapist.

As stated in the Mandel Model of Therapy, the client already has all the resources they need in their unconscious mind. We merely shed the light and make them realize what they already have all they need to get to where they want to be.

To propose a solution would be to impose our model of the world on them, but only they truly know what’s keeping them stuck and how to move forward, even if they don’t realize it yet. Our work involves uncovering those resources hidden in the unconscious mind and bringing them up to the surface, where they become accessible.

Simply put: Empowering them to figure out and determine their own target state is far better than attempting to do this by yourself. You’ll do this by asking the right questions.

(Read: How To Create Empowering Questions To Change Your Life.)

An Ecological Solution for All

Obviously, the target state must be ecological for the client. They went to see you because they want to see their lives improved. But sometimes, that solution has negative consequences on other people, such as relatives and close friends.

The client who has become more confident to improve his interactions at work might ruin other relationships if he comes home with that same attitude. An assertive, somewhat aggressive response to a hurtful comment made by a mean coworker may be appropriate in that context, but not when he’s dealing with his wife and children. He’ll have solved one problem just to create another, possibly worse problem.

That’s why it’s important to establish a target state where all the outcomes are clearly defined. It’s the only way to ensure the change was well made and actually beneficial.

How Will They Know They Changed?

“What will you see, hear and feel when you have achieved this outcome?”

This is a question that not only presupposes the change will in fact happen, which is a subtle suggestion to the unconscious mind, it’s also how you’ll get the client to elicit the evidence criteria to show them they’ve changed and moved to an ecological solution without drawbacks.

Furthermore, it reinforces the idea of a positively stated target state and helps them move forward even more.

Getting to the Real Issue – What Do They REALLY Want To Achieve?

Having the target state positively stated, along with the evidence criteria to determine success, is already a huge step.

Previously, they were stuck in a situation where they focused on problems instead of solutions. Now, they have a target state in mind and are moving towards actual change.

But how do you know what they say they want is what they actually want?

This is the key point we talked about earlier in this blog post. Getting to the real issue means determining what are the client’s actual demands beneath layers of confusion that may be obfuscating it.

“What will this give you when you have it?”

This question is a killer. If done right, it gets the client to analyze all the pros and cons of the target state they’ve set, and ultimately determine if that’s really what they’re after.

Frequently, when a client wants to quit smoking, they’ll point being concerned for their health as the main reason. But you may find out that the real motivation is the fact that his family hates the fact that he smokes, and it’s bringing turmoil into his homestead. The real benefit state, in this case, is having better family relationships.

That’s important because it may change your whole approach to the situation. If having better relationships is what the client truly wants, then you should probably work on that before you deal with his addiction.

In fact, if they’re really closely related, the smoking habit might stop on its own once the primary issue is dealt with. That might happen if smoking is the client’s way to get away from all the stress in his house. In a case like this, once the stressful situations aren’t a problem anymore, there’s no more need for him to smoke.

If he doesn’t, there’s yet another simple question you can ask:

All of these questions, when asked at the right time, will continue to elicit more and more information about the client’s true problems and demands.

But they mustn’t be exclusive to you. Teach your clients how to ask themselves questions like these. As they do, it will go a long way towards getting their mind, health and life in order. Click here to read our complete article about empowering questions.

Inside the Mike Mandel Hypnosis Academy, we’ll teach you how to change people’s lives using hypnosis. Whether you’re doing it just for fun or want to make a career in hypnosis, MMHA is the place for you.

We’ll teach you the basic principles in detail so you won’t ever need hypnosis scripts again. Then we’ll move you up the ladder and teach you advanced techniques to deal with trauma, phobias, anxieties, and other everyday problems.

Click here to get started with a no credit card required, 100% free Test Drive of the Mike Mandel Hypnosis Academy.