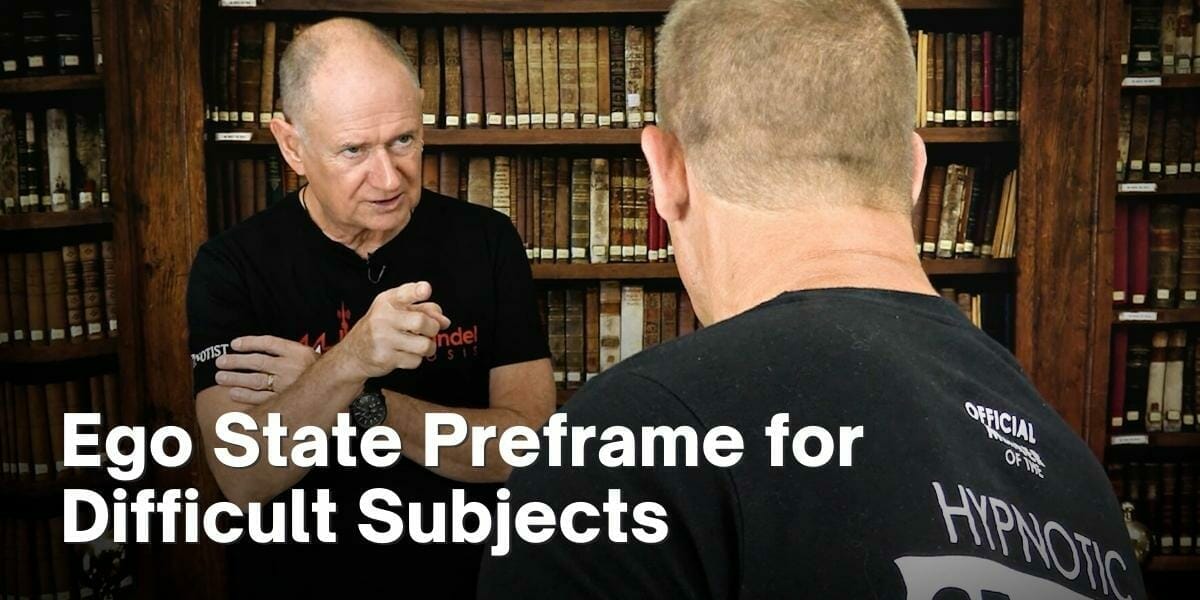 If you do hypnosis long enough, you will eventually run into a difficult or “refractory” subject. How do you handle it?

If you enjoy the kind of high-quality content we create for this blog, you'll most definitely love our Youtube channel. Check it out down below. Thanks for SUBSCRIBING and leave a comment!

A difficult subject might be someone who makes a point of being difficult, or simply someone who’s failed at going into trance, despite their honest attempts.

If you’re dealing with the first type of subject, in our opinion, there’s little point in proceeding any further.

That’s because hypnosis is a consent state that requires the subject’s co-operation. Therefore to attempt to force an intentionally problematic subject to go into trance, is to bang one’s head against a metaphorical wall.

But what about the second type of client; the person who would love to be an excellent hypnotic subject, but has failed with every attempt?

Sooner or later, if you’re doing hypnosis for personal change, you’re going to run into this. And it can be very frustrating, for both the hypnotist and the subject.

Unfortunately, there are many newcomers to hypnosis who use ineffective methods to attempt to overcome this problem. And, human nature being what it is, a typical solution they try is to keep doing the same thing and expecting a different result.

The idea is, just keep giving suggestions for sleep or relaxation, no matter how long it takes. Eventually, the subjects will fall into a trance.

Except when they don’t.

We once heard a fairly noted hypnosis trainer instructing the subject to “Just try to go into a nice trance” in other words, keep applying the method. This is especially funny, since trying also implies failing, as many hypnotists and coaches know. Click here to read more about power words..

Years ago, I read of a hypnotist who actually instructed an assistant to hold his subject’s eyes open, forcing him to stare back at the hypnotist. Apparently, he believed that through sheer exertion of the hypnotist’s will, the subject would surrender, and go into a trance.

Needless to say, it didn’t work.

For some subjects, there is an unusual method that sometimes works through overloading the conscious mind. The late Derek Balmer used this method with hyper-analytical people who had been unable to experience trance.

Balmer would have his subject stand and tilt his head back, so he was staring directly at the ceiling. He would tell the subject to close his eyes, and then, with the help of an assistant, he would rotate the subject like a spinning top, who was instructed to count backwards from 400 by threes, seeing each number in a different colour.

When the subject found it all to be too difficult, he would collapse into the arms of the hypnotist or assistant, deep in trance.

This is hypnosis by overload, and it’s not difficult to create many variations of this.

By occupying the conscious mind’s focus with too much to do, trance becomes a welcome alternative.

One of the reasons that many so-called difficult subjects don’t go into adequate trances, is simply because their beliefs are incorrect, and their expectations are too high.

Years ago, we encountered a subject who came in for therapy to have a phobia removed. As it turned out, it wasn’t just about the phobia though. He was intent on running the session too!

He said that he wouldn’t believe the phobia was gone unless he blacked out completely during hypnosis. He actually thought he had to feel like he’d had a general anaesthetic in order for the session to work.

His beliefs were not useful, and his criteria for success were unreasonably high.

But there’s an aspect to human personality that can make trance induction a very simple thing, namely ego states.

Without getting too technical, let's just say that we all have over 100 ego states that serve different purposes. Some are assertive, some are quiet, some take over tasks, like driving our cars, or making sandwiches. At any given moment, only one ego state is running the show, and said to be executive.

Realize that this is mainstream psychology. Ego states are not imaginary, but are burned-in neural pathways in the human brain.

Okay, but what’s this got to do with hypnosis? Actually, a lot.

The key is to realize that it’s probably a specific ego state that shows up for hypnosis sessions, and cannot go into trance.

And if that’s the case, the simple solution is to hypnotize a different ego state; one that will really enjoy being in hypnosis!

So how do you do that? How do you get a really hypnotizable ego state to show up and be executive, when you’re working with the client?

You ask it to!

When you have a session with a client who has not experienced an adequate trance, you fix the problem in your pretalk.

Look at your client intently and say something like this:

As crazy as it sounds, that might be all you need to do.

That’s because you have so many ego states, the chance of them all being hypnosis resistant is almost non-existent. Just make sure that you’re congruent, positive, and ask for a part to come forward, that would love to experience a deep trance.

Certainly there are people out there who have difficulty going into hypnosis. But by challenging disempowering beliefs, and appealing to a highly-hypnotizable part of the personality, almost anyone can experience a deep, useful trance.