What Is Covert Hypnosis? 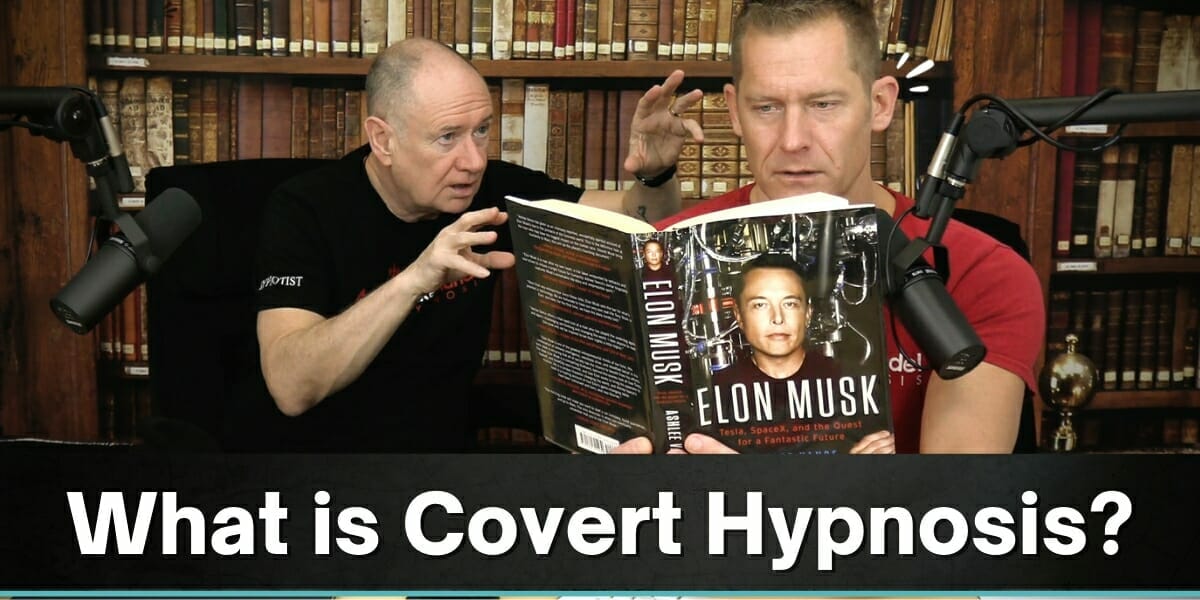 What the heck is covert hypnosis? Why would anyone want to learn it? And is it even ethical? Stay tuned, because by the end of this post, it will make a lot more sense and be a lot less mystical.

A working definition might be: anything that induces trance through focused attention on spoken words, evokes useful emotions in the other person, and leverages the emotions by offering suggestions.

Conversational hypnosis can be something you do with a hypnosis client, in which case the client understands the hypnotic context and has agreed to go into hypnosis.  But it can also be done informally, outside of any expectation of formal hypnosis, and is undisclosed.  That’s what covert hypnosis is.

By nature, all covert hypnosis is conversational. All other styles of hypnosis would come across as being pretty darn weird if you tried to hypnotize someone without telling them. Imagine asking someone to stare at a swinging watch or allow their hand to begin lifting from its resting place on a table top.  If this was not framed as hypnosis, you’d just seem weird. You’d break rapport, and not get any good result.

Covert hypnosis won’t even look like hypnosis, and may not even feel like hypnosis to the other person.  That’s because there is no relaxation, no eye closure, and no effort to stick someone’s hand to a table or feet to the floor. There’s no staring at objects or commanding any behavior either.

We’re going to share two simple examples where a conversation was the mechanism to evoke a certain emotional state in the listener, which resulted in a change of behavior from what we’d otherwise expect.

Chris Thompson was out for a jog one morning.  When he got home, his two young daughters started to argue. Elizabeth, the youngest daughter, wanted to borrow a stuffed animal from her older sister, Anne.  Even though Anne hardly ever touched this particular stuffed toy, she wouldn’t allow her sister to borrow it.  There were tears, and it was no fun.

Chris interrupted their negativity. “You won’t believe what just happened while I was out jogging just now!”  This caught their attention.  Chris told the girls how he happened to come across a young woman who was trying to break into a locked car on the side of the road.  He thought this was strange, so he stopped to ask if she needed any help.

It turned out she had accidentally locked herself out of the car, and her small puppy was in the back seat …all alone.  She was scared, and the puppy just wanted to be back in his owner’s arms.

(This actually happened, but it was a grown dog, and not a puppy.  Making a small adjustment evokes more of an emotional response)

Chris went on to explain how he was able to help the woman unlock her car door, and told his daughters how the puppy was so happy he leaped into the woman’s arms.  Chris dropped the line “It’s really great to be able to do nice things for other people.”

That last statement had the embedded command “do nice things for other people”.

The kids’ attention was absorbed as Chris told this story, and within moments Anne walked over to Elizabeth and whispered in her ear.  Elizabeth smiled ear to ear, because her sister had just told her she could take the stuffed animal with her to school that morning. They hugged.

Beautiful, and effective because Chris took a real story that would map across to their understanding of how good it feels to help someone, or do something nice for someone.

Mike Mandel was having some computer problems. He realized it was probably due to a messy hard drive with a bunch of old system files making the whole system operate slowly.

This was back in the day before you could buy software online, so he wanted to go to the local computer store to buy a copy of software called “Clean Sweep” to clean up the mess on his computer.  He knew his wife would think this was a big waste of money, and wanted to set up the right emotional state so she’d naturally agree this was a good idea!

In an otherwise ordinary conversation, he simply said, “You know our friends Paul and Liz? Have you ever looked in their kitchen drawers?”

Heather replied to Mike, “Yes! They are so messy! I don’t know how they live like that!”

“Honey … that’s what my computer’s hard drive is like. It’s a total mess with all these old and corrupt files.  But the good news is there’s a piece of software that I can get to clean it up and make it like new again.”

The next thing you know, Mike’s wife is encouraging him to go buy this magical software.

We said earlier that covert hypnosis is really just an ordinary conversation that takes advantage of certain hypnosis principles.  Here are a few of those principles.

Always start with rapport. We say that rapport is the glue that holds hypnotic trance together. Since the covert hypnotic trance is really just a conversation, rapport holds the conversation together. If the other person finds you annoying, slimy, or untrustworthy, you won’t have any rapport and nothing will work.

Elicit emotions. We’re usually telling some kind of story, making some kind of comparison, or asking questions to another person that are designed to trigger a certain emotional state. That state could be curiosity, love, compassion, interest, desire, or whatever.

Give suggestions. This is where we want to slip in our hypnotic message. What is it that we want to have happen? Chris used an embedded command in his story.  Mike just created the emotion and disclosed the solution directly in his example.  We could also use double binds (the illusion of choice) to offer two alternatives that both result in the desired outcome for the hypnotist.  All of these little language tricks to make suggestions more effective in covert hypnosis.

It’s really not much more complicated than that. The principles are simple, and there is no value in treating covert hypnosis like some kind of magic.  It’s just a conversation and it hardly even looks like hypnosis at all.

Who Should Learn Covert Hypnosis and is It Ethical?

If you deal with other people, this is a useful skill to learn. Do you want to influence people more effectively? Are you a sales person looking to boost performance at work? Do you just want to be better at helping people solve problems?  If so, covert hypnosis is for you.

Is it ethical?  That’s a great question. Remember that hypnosis is not mind control. It’s just a conversation. We elicit emotions from others all the time even without intending to, and without thinking of what we do as hypnosis.

But everything is hypnosis.

Watching a movie is hypnotic, whether it’s a romantic scene, a heated argument or a woman walking down a scary, dark alley late at night.

Reading a book can be hypnotic.  Telling someone a crazy story about what happened at work that day can be hypnotic, too.All we’re doing, with covert hypnosis, is being intentional about what emotional state we want to elicit in another person, and using a few extra tricks to plant suggestions that are more likely to “stick” in the presence of those emotions, and when we’re in rapport with the other person.

If you’d like to learn more about hypnosis for practically any situation, be sure to check out the Mike Mandel Hypnosis Academy. Over here, you’ll discover all about hypnosis from beginner to more advanced levels. If you study the material and do the exercises as we suggest, you’ll naturally become a fabulous hypnotist.

Get a 14-day free trial at the Mike Mandel Hypnosis Academy by clicking here.