The Strangeness of Trance Logic and Cognitive Dissonance 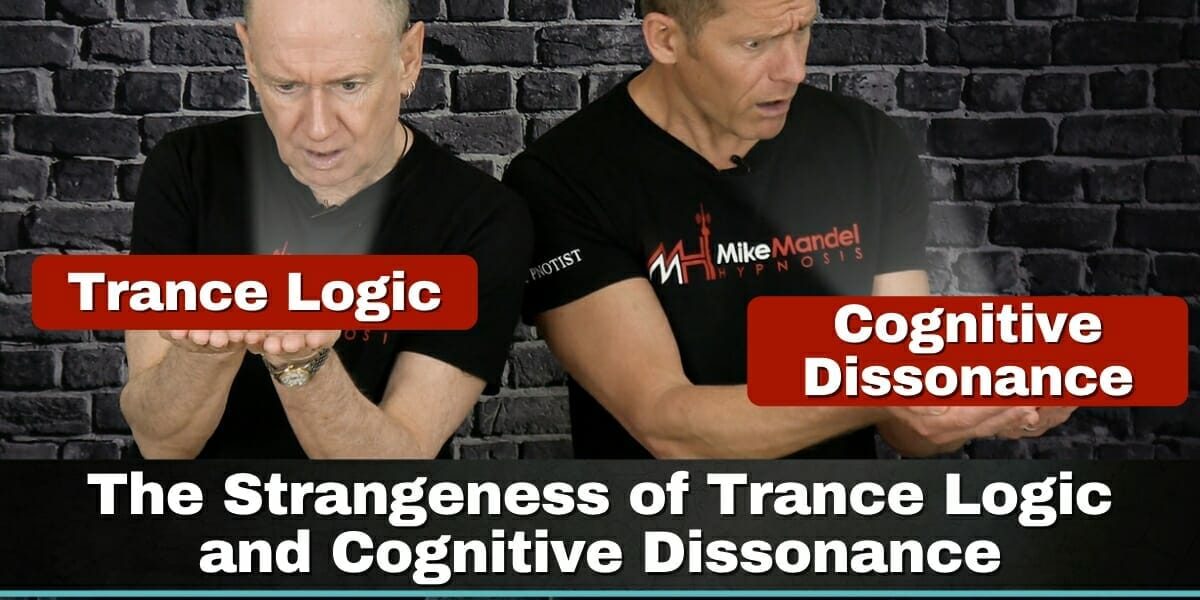 This blog post's title is a mouthful, isn’t it? We promise it’ll make sense as you read through, though. It all starts with Professor Martin Orne from the University of Pennsylvania.

In the 1950 's Dr. Orne discovered what he then called “trance logic”, which relates to the more well known concept of cognitive dissonance.

What the Heck Is Cognitive Dissonance?

Very simply put, it’s when our brains hold completely contradictory ideas and, not realizing the impossibility of this, believe both to be equally true. One of our team members, for example, recalls simultaneously believing in both biological evolution and in the Biblical 7-day creation of the world when he was a child.

(Let it be clear: we don’t mean to affirm either one of these points of view as correct, only they can’t both be correct at the same time and in the same sense.)

Normally, this would be very problematic. A twisted apprehension of reality is never a good thing. In a regular state of consciousness, cognitive dissonance shouldn’t occur. At best, a case of it means one hasn’t properly assessed a given situation; at worse, it means serious mental impairment.

We aren’t talking about regular states of consciousness, though. In hypnosis, a mentally fit and healthy person can hold opposing beliefs at the same time. That’s what trance logic means, and it’s the beauty of hypnosis.

By the way, if you're enjoying the high-quality content we create for this blog, you'll most definitely love our Youtube channel. Check it out down below. Thanks for SUBSCRIBING!

The amazing thing is, the conflict that inherently opposing ideas would generate in a regularly functioning human mind, simply disappears in a hypnotic trance. During hypnosis, dissonant realities can simply co-exist with no confusion whatsoever.

This happens all the time during stage hypnosis shows. Mike Mandel, once a stage hypnotist, would use hypnotic trance to cause all sorts of weird and normally contradictory things to happen.

The subjects were onstage and entirely aware of their whereabouts, but as soon as Mike suggested they were in a South American jungle, his volunteers would immediately believe they were there, though they’d never left the stage. In their minds, they were still in the theater, but they were ALSO in the hot jungle, trying to escape swarms of bothersome mosquitoes.

In hypnosis, the contradictory beliefs of cognitive dissonance are reconciled perfectly via Doctor Orne’s trance logic. Hypnotic trance enabled the volunteers to bypass their critical faculties and maintain differing ideas with no perceived contradiction.

If you’ve never been hypnotized or have never received suggestions for the purpose of entertainment while in a hypnotic trance, you may get a sense of what that feels like by remembering your most recent dreams.

More often than not, dreams don’t make the slightest bit of sense. For example, our CEO Chris Thompson, once mentioned dreaming about paddling a canoe down a grocery store aisle. In a waking state, you’d not be able to simultaneously hold on to those two beliefs (being in a grocery store and paddling a canoe). You’d immediately realize something terribly out of place is happening.

In a dream, however, you just go with the flow. Seldom do you realize that none of that is logically possible. The part of your mind responsible for that (called the critical faculty) is switched off. That’s what happens in a dream, and in hypnosis, too.

The bottom line is, in both hypnotic trance and in a dream state, the impossible and the ridiculous, can be perceived as completely normal; something that can be amazingly useful.

With the barrier of real-world logic and rationality out of the way, we can access resources buried deep in our unconscious minds that would otherwise have remained hidden. Believe us when we say that your mind is FULL of potential that can be used to improve your life in all aspects, and all you have to do is find it, and put it to good use.

And amazingly, all you need, in order to access the resources to fix all sorts of issues, is some high-quality hypnosis training. Hypnosis can enable you, and others, to reach full potential, by accessing unconscious resources that are buried under outdated thinking patterns, and limiting beliefs.

For this purpose, there are two programs we think would be a perfect fit. The Mike Mandel Hypnosis Academy will help you master all the fundamental principles and most important techniques of hypnosis in a reasonable amount of time. Our training compiles the best aspects of all hypnosis modalities in an easy-to-understand program, that will make you an extremely capable hypnotist, if you follow it thoroughly.

If you’re mostly interested in helping yourself, our Easy Self Hypnosis course is what you’re looking for. With a solid foundation of the principles of effective self-hypnosis, you’ll be able to easily put yourself into trance and discover the wonders your unconscious mind holds. The Easy Self Hypnosis course is both a standalone product and is also within our larger Personal Growth Membership, the ultimate collection of courses for personal development and self-improvement.

Click here to get a 14-day FREE trial at the Mike Mandel Hypnosis Academy.