The Principle of Threshold: How To Know if Someone is Ready To Change 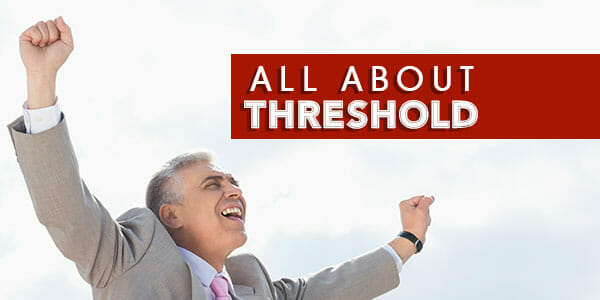 What we’re about to explain in this video has the power to completely change how you deal with people forever. This is true for almost every interpersonal influence situation.

As hypnotists, we are accustomed to helping people make important changes in their lives. But just as a teacher can’t make you learn something, a hypnotist, no matter how skilled, can’t make you change.

Clients have to actually want to change, or nothing happens. The same is true for other relationships, not just the hypnotist / client relationship.

Change happens if, and only if, a person is at what we call “threshold”.  There are three simple tests to determine if someone is at threshold.

Here are the three components of threshold

Something has to CHANGE.

It has to be ME

It has to be NOW

Let’s have a look at each component of the threshold test.

Something has to change.

This one is pretty obvious, right? If someone does not consciously realize that a particular change is important to make, it’s not going to happen.

Someone who is overweight, but not particularly bothered by the situation, isn’t going to change.

Someone who smokes, but doesn’t care about the effect on his health, isn’t going to quit.

Someone who doesn’t love their job, but still tolerates it, isn’t going to find new employment.

There are two meanings to this, and both are important.

First, the person who is considering making the change has to be the one that actually wants the change.  The husband who’s wife wants him to lose weight because she doesn’t find him sexy anymore … he’s unlikely to change without wanting that change himself.

The child who’s parents are nagging him to stop biting his nails or sucking his thumb … it’s the parents who want the change, not the child.

Second, this means that people have to take responsibility for the changes that are going to happen in their lives.  If a client wants to stop fighting with his wife all the time, he can’t put the blame on her and expect her to change. He’s the one who has to do the changing.

We call this being “at cause”, meaning you’re the one causing the change.

The opposite of this is being “at effect”, meaning you’re being affected by something rather than causing it yourself.

It has to be now.

This is often the missing component … the one thing that stops people from actually changing.  They know they need to make a change, and they acknowledge responsibility for the change, but they’re just not ready to do it yet.

A guy we know is constantly putting off critical changes to his personal wellness. He’s obese. He drinks too much and consumes substances that harm his well being and his ability to be a great father to his kids.

And yet he constantly says things like, “I know … I’ve got to change … I can’t go on like this. Keep bugging me guys.  I need to hear this. Next year I’ll start fresh.”

He’s got two out of three components of threshold, yet he simply will not change.

So what do you do with this information?

Now that you understand threshold, start noticing the excuses people make when you’re listening to them talk. What changes do people avoid? Which component of threshold is missing?  Tune up your calibration skills by noticing where people get stuck.

When potential clients call you up, consider whether you want to check for threshold before you take them on as clients. Maybe you like a challenge and can help them achieve threshold in a session. Or maybe you want to keep it simple and only work with people who are already clearly at threshold.

Watch out for third party interventions.  That’s when someone contacts you to help someone else. The person who needs the help needs to be the one who reaches out.

And when you get into a conversation with a client, or anyone else in your life, consider ways to help them hit threshold.

Here are a few ideas that can push people over the edge and get them highly motivated to change right now.

Ask them what will happen if they don’t change.

When people go through the exercise of imagining their life continuing without change, sometimes the realization of just how bad something can get is enough to get them to threshold.

A number of years ago a good friend of ours was complaining (again) about her unhappy work situation. I looked right at her and asked, “How are you going to feel when we have this exact same conversation again next year?”  That was all it took. She couldn’t bear the idea of knowing she might waste another year of her life hating her job.

Ask them how much better things will be when they make the change.

This is the carrot instead of the stick. It’s all about asking the person what they’re moving towards.  Just keep in mind that people already consciously know the potential value of a change, and yet so many people still don’t change.  Consider this just one tool to help someone reach threshold. It usually doesn’t work all by itself.

When you put the carrot and the stick together, you have what Tony Robbins calls the twin forces of pain and pleasure.  Use them both. Be creative. Be congruent.

Have an Instant Influence conversation with them.

Instant Influence is a conversational approach developed by Michael Pantalon, PhD. He wrote a book about it by the same name, and we created this simple video overview of Instant Influence.

Foundational to Instant Influence is the concept of autonomy. You can’t make another person change. People only change when they want to, and when they are ready. By reinforcing their autonomy at the very beginning of a conversation, you’ll build rapport and eliminate resistance.

Tyrrell writes about a client who has come in for smoking cessation because he knows smoking is unhealthy. But the client has tried other solutions and nothing has worked. He then admits to Tyrrell, “ But I want to smoke.”

How can you help a client who wants to keep doing what he’s doing? Tyrrell’s brilliant solution was to acknowledge the part of the client that wanted to smoke, while using a sports team metaphor to get the client to think about the different parts of him working together, like players on a team, to achieve his most valuable goals.

The Bottom Line About Being Ready to Change

We can’t make people change, but we can communicate with them elegantly. It’s impossible for someone to not respond, internally, to our communication. If we start from a position of deep caring, and we maintain rapport, then we can sometimes help people get to threshold.

Now it’s your turn. What would you like to change but have been putting off?

Which element of threshold has been holding you back?

How will your life suffer if you don’t make this change?

Who, if anyone, that you love, will this deeply affect?

And how will your life become even more incredible once you change?

Is there a part of you that’s been resisting this change while other parts are ready?

What happens if you think like a sports team and have an internal meeting with these parts so you can win the game?

And finally … nobody can make you change. It’s up to you.