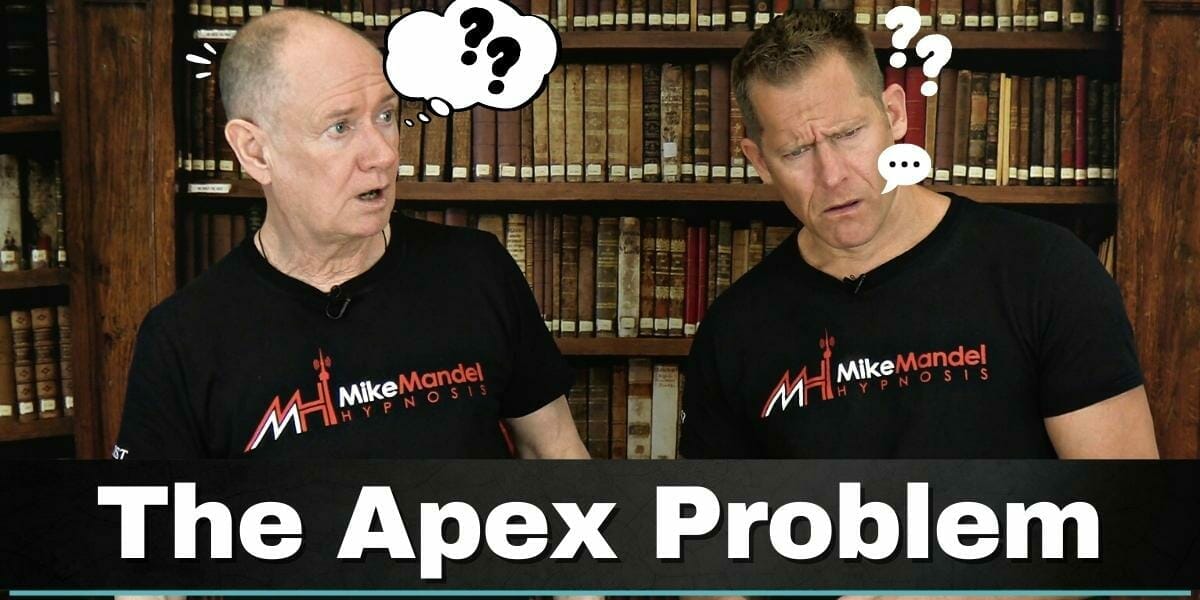 Is it possible to be too effective doing therapy? Can you do such a good job that it’s actually counterproductive?

Can you remove an issue so thoroughly, that the client thinks that they never had a problem in the first place?

As crazy as it sounds, the answer to all of these questions is a guarded YES.

If you enjoy the high-quality content we create for this blog, you'll definitely love our Youtube channel. Check it out down below. Thanks for SUBSCRIBING!

I first heard about this problem when I attended a weekend-long training in Toronto, and it came up again when I was reading about Human Givens theory, created by Griffin and Tyrrell in the United Kingdom.

In their excellent book, the authors discussed how volunteers who experience stage hypnosis often deny that they were hypnotized at all, despite perfectly performing ludicrous skits, as suggested by the hypnotist.

It explained my own experiences, back when I did stage hypnosis for over forty years. No matter how well a volunteer had responded to all the suggestions given, there were occasionally those who insisted they were “just playing along” the whole time.

When asked about why they’d do this, when they seemed to be in deep trances, they had no real answer, other than they “just felt like it”. Sometimes I pressed the point, and asked why (since it wasn’t working) didn’t they just leave the stage and go back to the audience? Invariably, they would look at me with a blank expression and answer that they didn’t know.

Any hypnotic entertainer who continues to perform will fall into one of two categories:

Some subjects will go out of their way to rationalize hypnotic phenomena because they simply cannot accept it’s happened to them.

Years ago, I told a man onstage that another onstage volunteer didn’t exist. I then called the first man to walk toward me, with the second person directly in his path.

It looked like he’d crash into the other person, but at the last instant, side-stepped around him, missing the man by half an inch, clearly indicating that he knew the other man existed, and was standing in his way.

I asked him why he did that little side-step, and he quite seriously told me it was because the floor looked slippery there, and he hadn’t wanted to slip and fall.

After the show, he denied that he’d been hypnotized, even though he was unable to recall most of the show that he’d participated in.

Some researchers have said that these subjects are not functioning at the apex of their mental powers at that moment, and are therefore unable to make sense of what’s just happened. And this naturally leads to the funny but nonsensical explanations.

But what about the therapy room? It is here that the most startling apex phenomena may occur.

In the 1990s, I studied Meridian Based Psychotherapy with Willem Lammers. In the weekend-long class, we learned the basics of TFT, EFT, and some other tapping methods, to reduce or completely eliminate negative emotions.

Lammers, who was an excellent teacher, mentioned the Apex Problem, and said that we could remove a problem so thoroughly, that the client couldn’t remember having the problem in the first place! This seemed interesting, but somewhat unlikely.

Until it happened to me.

In the 1990s, I had an office in the Beaches area of Toronto, where I mostly dealt with fear, anger, sadness, and trauma. I had a good success rate, and one day a new client arrived, who’d been sent by a previous client who’d overcome a severe phobia.

The new client (who I’ll call Jean) was in a bad state. Like me, she was a cat lover, and she told me that her cat had died. But when I interviewed her, the whole story emerged. It turned out that the cat had fallen ill, and she’d been unable to afford having the poor animal euthanized.

She had smothered the cat with a pillow.

“I murdered my best friend!” she kept repeating; the tears running down her face.

I proceeded to teach her a simplified tapping regimen I typically had great success with, and we took layer upon layer of grief, deep sadness, and guilt away. She was a model client, and followed my instructions to the letter, as we removed the horrible emotions from the memory.

I closed the session with some hypnosis to stabilize the changes and give ego strengthening suggestions. I knew we were done, when she offered me a reframe, and said that she’d set her sick friend free.

I felt very happy for her and began making notes to close the session.

Then she suddenly said, “I think this whole thing was a rip-off!” I was shocked and asked what she meant. She went on to say that she didn’t think she’d had a problem at all, and had been taken advantage of.

It was the Apex Problem!

To hear about it in a class was one thing, but to see it was something else.

She had literally gone from debilitating grief and guilt to complete relief. Then she’d continued on to feel that there had never been anything wrong.

I thought fast, and pointed to the tissues on the table, and asked her where they came from? She looked a bit stunned and then answered “Oh… I was crying…” and I replied that she had been crying a LOT.

She thanked me and then left my office. But without SEEING the evidence of how bad she had felt, it would have been difficult to convince her, because the negative emotions were completely gone.

So here’s my advice for you:

If you work with clients who have terrible negative emotions, you must do this before you offer any help: Find out what the SUDs are and write them down!

If you’re new to all this, SUDs are Subjective Units of Distress. Basically, you ask the person how bad they feel, with zero being nothing and ten being as bad as can be. It’s a useful thing to do, in cases of emotional, as well as physical pain. And it’s generally a good idea to seek to take SUDs to zero.

So find out how bad the person feels, out of ten. Write it down and circle it.

Then you’ve got something to point to if the Apex Problem shows up, and you have to prove to your client that they actually had a problem.

Next Steps: Whether you’re a total beginner or an experienced hypnotist, come study hypnosis with us at the Mike Mandel Hypnosis Academy.  It’s easy to start and so much fun!