Stage Hypnosis – What if the Subject Suddenly Wakes Up? 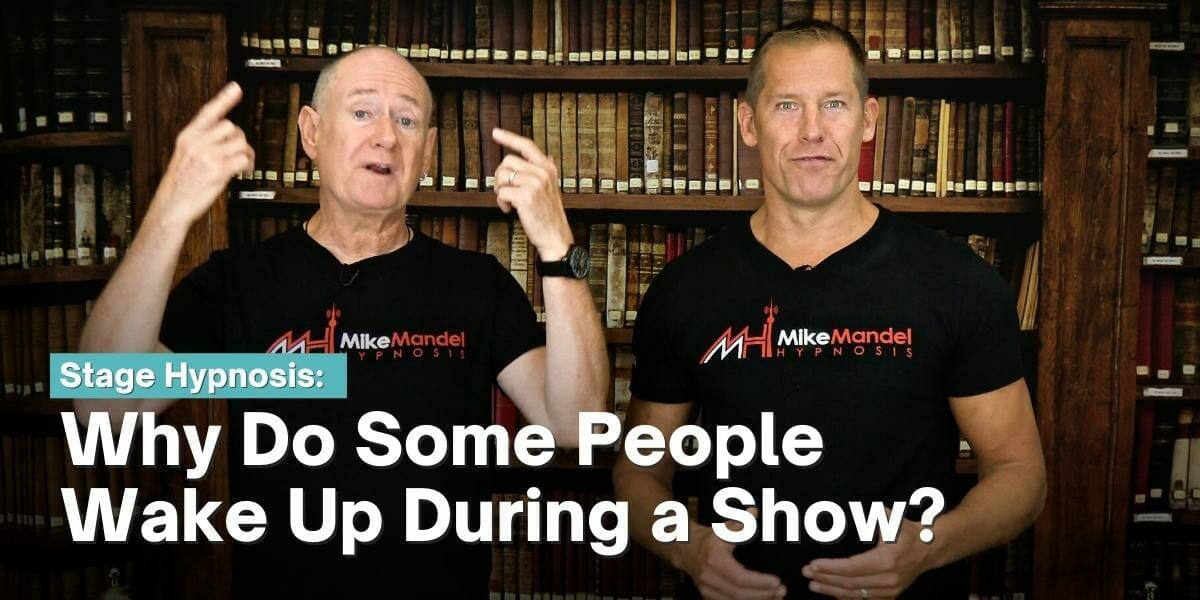 Stage Hypnosis is a Numbers Game

Mike Mandel has probably performed about 5,000 stage hypnosis shows during his professional career as an entertainer. He started doing professional stage hypnosis in 1975 and retired from the state (to focus on teaching) after more than four decades.  So if there’s anyone to answer this question, Mike is your man!

A good stage hypnotist has two concerns.  The first concern is (of course) the ecology of the participants.  He must protect their safety, but also take care not to embarrass them in a way that would cause emotional harm after the show.  The second concern, or goal, is to make sure the show is as entertaining as possible.

Then, through progressive testing, the hypnotist can send back the least-receptive participants and keep the best performers.

This is why Mike Mandel would typically have a stage setup with one long row of chairs. Volunteers would come up on stage and he’d fill the row of chairs, plus he’d have another row of people standing behind the chairs.

If you think about a gardening metaphor, you’ll understand.  When you plant seeds in a garden you typically plant far more seeds than you expect to grow.  That’s because some seeds turn into super plants, while some just never grow.

With stage hypnosis and your volunteer performers, it’s the same thing.

Performers? Are they faking? Is this all just a big act?

Some stage hypnotists have been known to use what we call “stooges”, or planted participants. But this is not common. The reason it’s not very common is because stage hypnosis is not particularly difficult. If you have enough volunteers and you know what you’re doing, you’re bound to get a bunch of excellent subjects who naturally go into hypnotic trance and who are unconsciously performing hilarious acts.

You never know who’s going to be the star of the show either.  Sometimes that super quiet school teacher becomes the best “laughter police” you’ve ever seen!  He’s handing out million dollar infractions to the audience for laughing, and everyone is having a great time!

This is why progressive testing is important.  The hypnotist is running his volunteers through a series of more complex hypnotic tests to see who goes most deeply into trance.  If someone isn’t responding well enough (or at all), he can just tap them on the shoulder and gesture for them to go back to the audience. Click here to learn more about suggestibility tests.

What about people randomly waking up?

Sometimes, but not often, a volunteer who has made it through the progressive testing just seems to come out of trance for one reason or another.

There are a million different reasons this can happen.  It can happen during hypnotherapy too.  Mike’s mentor, Derek Balmer, once had a client wake up in the middle of therapy.  She ran out, put more money in the parking meter, and came right back into the office, sat down, and went back into trance.

Stage hypnotists are using a shotgun approach to hypnosis.  They have to keep the show entertaining.  So they can’t take the necessary time to deal with every possible combination of interruptions that might affect each person.

So if a volunteer “wakes up” from trance the hypnotist may simply send them back to the audience.  That’s the easy way to handle it.

But if the hypnotist is really skilled with calibration, and senses that this person might just be on the edge of trance and slip back in very easily, he can turn it into an entertaining moment by (seemingly) magically gesturing to “sleep now!”, and the person will gently collapse onto the stage floor and fall back into trance.

That’s pretty much all there is to it.  Stage hypnosis is a numbers game where a fast pace is required to keep things very entertaining. If a volunteer is not responding … just send them back to the audience. And if they wake up in the middle of a show, either use that for entertainment or send them back.

If you’d like to learn the principles of hypnosis (they are the same for stage hypnosis and therapy), make sure you check out the Mike Mandel Hypnosis Academy because we’ve trained thousands of hypnotists all over the world.