Placebo and Nocebo: Why You Should Carefully Prescribe Your Words 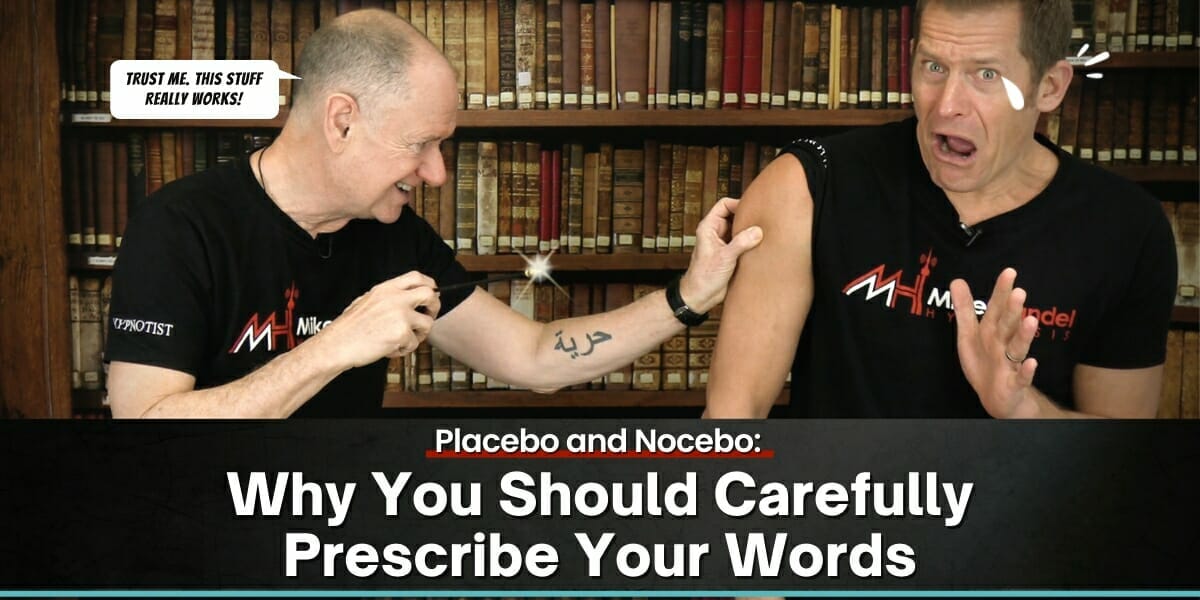 If you’re like most people, you’ve probably heard of the placebo effect. But you may not have heard about the opposite, the nocebo effect. In this post (and included video), we’ll explain what you need to know so you can amplify your hypnotic power in everyday life.

What Is a Placebo?

Merriam-Webster defines a placebo as a, “pharmacologically inert preparation prescribed more for the mental relief of the patient than for its actual effect on a disorder”

This means that when we believe “something” is beneficial, it actually affects our brains and our bodies at a cellular level.

It is important to note that the “something” is usually a sugar pill that is entirely inert without any active ingredient and still creates the expected benefits in the patient.

Where Are You Likely To Encounter a Placebo?

Every time you go to pick up a prescription you can be fairly certain there may be placebos stored and available behind the counter.

Did you know that the size, color, and packaging alone have a measurable effect on how effective a given placebo will be?

Studies have found this to be true both for inert pills as well as amplifying the positive results for pills that contain the active ingredients you expect. That Advil you take for a headache? The packaging design, the size of the pill, and even the label “Extra Strength” will affect you at an unconscious level even though none of these factors change how the active drug, Ibuprofen, acts within your body.

How Would You Feel if You Discovered You Were Taking a Placebo?

This happened to Mike Mandel back in 1975 when he was still new to the world of performing and was terrified of going onstage.

He says, “My doctor gave me a tranquilizer to take an hour before I went on stage and one night, I couldn't find the pills. I had left them in Toronto when I was in another city and I was panicking…the tranquilizers were not there and I found out when I went on stage, I didn't feel any different or any worse than when I was taking those things...My doctor told me he'd give me a placebo. There was no ingredient in the pill but sugar.”

Would you be angry or grateful? There is certainly an ethical component to this discussion that could be fun to explore at a later date.

What Is a Nocebo?

Merriam-Webster defines a nocebo as, “a harmless substance or treatment that when taken by or administered to a patient is associated with harmful side effects or worsening of symptoms due to negative expectations or the psychological condition of the patient”

This means that when we believe “something” is harmful, it actually affects our brains and our bodies at a cellular level.

In both the placebo and nocebo the result is created by the belief. The difference is that a placebo creates positive benefits whereas a nocebo creates negative side effects.

Where Does the Nocebo Effect Appear in Our Lives?

Consider someone who is getting a vaccine, the doctor might tell them to expect some side effects, like a fever or a sore arm.

If we are looking for a nocebo effect then the doctor might say, “Most people who get this vaccine experience a really sore arm for a couple of days that is often accompanied by a fever.”

If we are looking for a placebo effect then the doctor might say, “Some people find a little soreness in the area, but most people have reported no side effects at all, and I know, you'll be totally fine.

Are you realizing how important this knowledge can be?

When You Recognize a Nocebo, You Can Stop the Harm

Chris Thompson was listening to a podcast where a psychologist was being interviewed by a medical doctor.

The psychologist explained she had a virus for 10 days now and had heard that this particular virus wasn’t supposed to make her that sick.

She decided to call a doctor friend of hers and said, “oh, ten days, that's when your blood oxygen levels drop and you need to go to the hospital.”

Luckily this woman recognized the power of his words and she ended up muting this other doctor's text messages and made a full recovery.

Could a Nocebo Cause Death?

The Corsini Encyclopedia of Psychology and Behavioral Science says that bone pointing has been known to result in death. This practice was used by some tribes to identify the perpetrator of a serious crime.

The entire tribe stands in a circle and the medicine man/ witch doctor goes around the circle with a bone and points it at the guilty person. According to this encyclopedia, people have actually died from this.

We’re not saying death is normal for a nocebo. Thankfully not! A more likely biological response would be for the body to trigger a cortisol response. This can suppress the immune system and slow down healing.

How Does This Apply to Your Life?

If you're a doctor, you need to recognize that because you're delivering words from a position of authority and your words will have a definite effect on this person. You may want to take extra time to make sure you're prescribing the right words to maximize healing.

If you're a hypnotist, this is something that should resonate already. You are an authority figure to your clients and part of your training was likely to be mindful of how you're using your words.

If you’re a parent of a child that still believes they can be healed with a kiss, you have all the power in the world!

I am hoping you may begin to notice the power of what someone (or you) believed and select words intentionally based on this!

Doctor Richard Bandler used to joke about and say he wanted to “put out a new extra-strength placebo with twice as much in active ingredient.”

Knowing that the placebo and nocebo effects exist you can surround yourself with people, resources, and the best environment to maximize the positive beliefs you will absorb from your life interactions.

If you're interested in learning more and perhaps even studying with us to become an awesome hypnotist, check out Mike Mandel Hypnosis Academy where you can start with a 14-day free trial and then decide if you still want more!