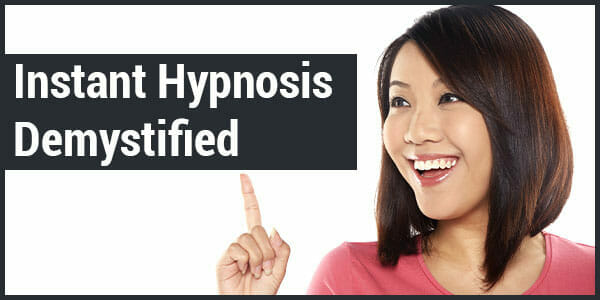 Instant hypnosis and power inductions are an area that seems like real magic. After all, if you ever see street hypnosis videos on YouTube, you might believe it is magic.

In fact, it’s not as instant as you might believe. Allow me to explain…

The first thing you must understand is that all hypnosis follows a common structure. An "Architecture Of Hypnosis" if we borrow from the name of Mike's and Chris' ?classroom hypnosis training.

Anyway, there are 4 distinct parts to nearly every hypnosis demonstration.

Now, it is worth noting that parts one and two are oddly interchangeable and also in trance there can be false awakenings. So, when you see some demonstrations it might look different. But as they say, “Looks can be deceiving”

In fact, as near as I can tell all the variations I’ve seen on this formula still fit the pattern. This is even true if the hypnotist doesn’t quite understand why what they are doing is working.

Now, let’s walk through the structure and how it applies to “instant hypnosis” demonstrations.

Imagine you are in a room where a female hypnotist is doing a simple hypnosis lecture. She starts off by telling you her history in hypnosis and how it’s not strange or scary at all. In fact, hypnosis is super fun and interesting.

Next, she asks a few simple questions to see who ate breakfast that morning, who believes the sky is blue, and who is there to learn more about hypnosis. Everyone agrees and she smiles.

A moment later she asks for a volunteer and you agree to come join her up front. And as you approach her she asks you for your name. You tell her and she offers to shake your hand.

And as you stick out your hand to shake hers she grabs your wrist gently, places your hand in front of your face to stare at a point on your palm. And as you stare at your palm she instructs you to focus on that point of that hand until it touches your face and for you to "sleep now!"

Your body goes slack and you drop into trance instantly. She gives you these wonderful ideas about becoming more confident. She speaks in a wonderfully powerful way, making suggestions that resonate with you unconsciously.

Some time later you hear her counting you awake and after counting 3… 2… 1… she says “Wide awake now.” and you open your eyes to her giving you a big smile and a happy greeting.

The class claps because you did an excellent job participating.

What Is Instant Hypnosis Anyway?

So, the actual induction part of the above story is really short. Instant from a certain point of view. If you were to time it, it would look like you went from wide awake to hypnotized in a few seconds. Certainly less than a minute right?

Let’s go back to the model. What step is induction? Step 2 right?

So wait a second, was there no step one? Where was the setup, the pre-frame, the rapport building?

Did our hypnotist skip a step? Not at all.

All the pre-framing and rapport building happened in front of the whole group. She was building rapport as people entered the room, perhaps she asked peoples names as they came in. She told her story and made hypnosis sound comfortable and fun.

Everything that happened before you ever walked up to the front of the room was preparing for the handshake induction.

How Instant Is Instant Hypnosis?

Now, if you include the time she spent getting to know the room, the “instant hypnosis” experience goes from less than thirty seconds to more like five or ten minutes.

The induction feels instant and in some ways it is. There are many instant and power inductions that go fast. They are excellent for live and street demonstrations of hypnosis. And they are a lot of fun.

What most don’t take into account is all the pre-talk and rapport building with an audience before any induction takes place at all.

When you watch street hypnosis videos on YouTube, what you don’t see is the person standing there watching other people be hypnotized first. Someone could stand and watch for five, ten, maybe fifteen minutes before any induction is done.

If someone is building rapport and demonstrating hypnosis for that long, it is easy to have a willing volunteer drop into trance instantly.

In a group setting, instant hypnosis is actually easier. This is part of why stage hypnosis is so awesome. Once you get the group into the right mental state, a kind of light group trance forms.

At this point some people can get so sucked into the experience that all the hypnotist needs to do is look at them with intent and say “Sleep now.” and they will!

Also, when you put someone trance more than once, almost every hypnotic induction becomes an instant induction.

The Truth About Instant Hypnosis

The truth about instant hypnosis is this. Instant inductions and power inductions are awesome. They are a lot of fun to use and they can feel like magic.

However, to make any induction work you still need to build rapport and pre-frame the hypnotic experience. With the right setup, all inductions work faster and better because your audience is excited to be part of the experience.

It all boils down to this. Do good hypnotic work. Master the basics because they give you the most powerful foundation to work with.

With that in place, you will find hypnosis to be easy, powerful, and fun.