Someone Told Me, “I Can’t Be Hypnotized!” 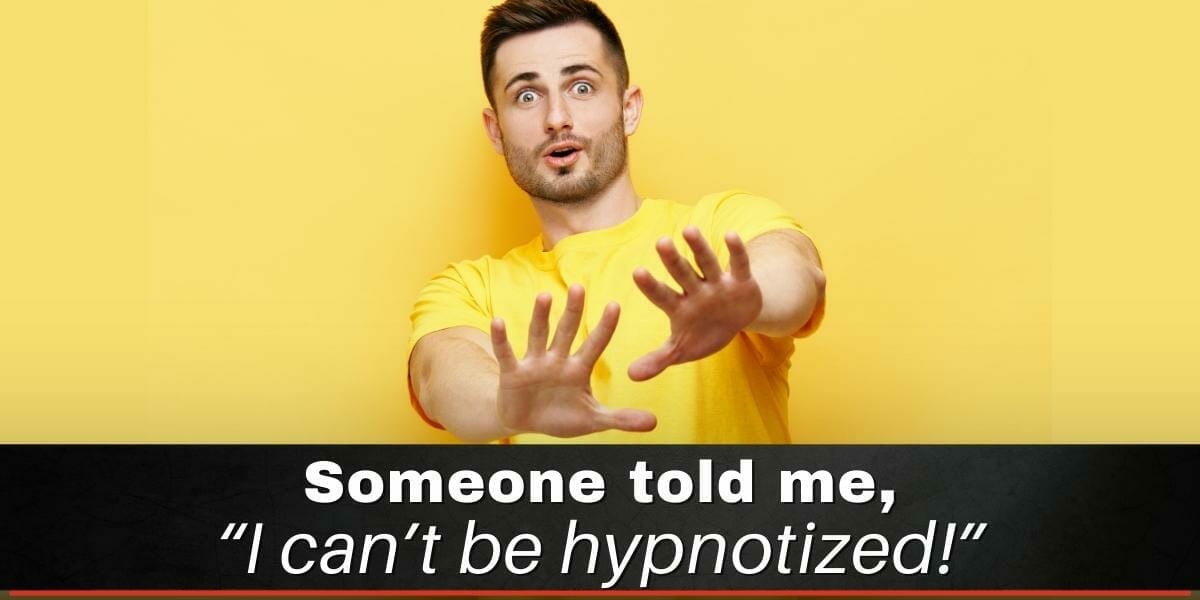 That’s a line we hear quite a lot, from different sorts of people.

Some say it almost wistfully, as though they really want to be hypnotized, but it’s just not possible for them.

Then there are those who parade this belief as a badge of honor. Somehow believing that not being hypnotizable is a sign of superiority or some degree of intelligence, like when a stranger told me he couldn’t be hypnotized because his mind was too strong.

“It sucks to be you…!” That was my response. To understand why, watch this video or keep reading until the end of this blog post.

How Do You Know You Can’t Be Hypnotized?

So let’s figure this out.

What are the evidence criteria that you cannot be hypnotized? In other words: How do you know you can’t?

And be specific here. What’s that belief actually based upon?

Do you think you’re not hypnotizable because a school friend attempted to hypnotize you to make you quack like a duck, but it didn’t work? Or was it a doctor or other authority figure who told you “hypnosis isn’t real”?

And what kind of hypnosis are we even talking about? Do you mean you cannot be hypnotized onstage as part of a show? Do you believe self-hypnosis can’t possibly work for you?

Or maybe you mean even watching an excellent film has no power to engage your emotions, or your ability to use your imagination is sub-par?

Seriously, think about it. Is it possible that you’ve adopted a set of beliefs that have caused you to accept something with no basis in reality as though it’s true?

In other words, are you hypnotized to believe that you can’t be hypnotized?

So Who Did the Hypnotizing?

You might discover something interesting about yourself by looking at this question with fresh eyes. You might find that there really is someone preventing you from really enjoying a good hypnotic experience.

Here’s a fairly easy way to figure it out…

What was the event, conversation, or piece of information that locked and cemented that belief in place?

Then once you have the answer to that question, ask yourself how you know it’s true.

These are our two favourite Jedi Questions to challenge any limiting beliefs.

Perhaps you can consciously recall when that limiting conclusion arrived, and you accepted it as an absolute fact. But even if you cannot remember the exact moment, you should still go on to ask yourself how you know it’s true RIGHT NOW.

Some hold to a belief system where just believing something makes it true for them. We can all agree that a belief like that is so patently false that it’s difficult to understand how anybody could believe it to be true.

For example, I can believe that gravity doesn’t exist with all my being. Still, if I step out of an aircraft at 20,000 feet without a parachute, that belief will fade away in a matter of seconds. The universe does not typically care about what we believe. Reality simply imposes itself.

Simply put, our beliefs can be true or false. And what we believe about our beliefs does not affect whether or not they’re valid, and that’s important to keep in mind.

In NLP, beliefs are simply models of the world that may or may not be accurate. The bottom line to NLP people and well-trained hypnotists is whether or not a belief is USEFUL. The Chain of Excellence is an example of an immensely useful belief.

In other words, does a belief offer any clear evidence that the effort to continue believing is worth more than the effort to let it go and consider something new?

A belief that’s not useful because it serves no positive purpose is probably not worth maintaining. Suppose a young woman believes her fiancé is an upstanding member of society, and a genius, despite his frequent prison terms and room temperature IQ. Would it do well to reconsider her beliefs about him?

So What About Hypnosis?

Here’s where we’re going with this discussion…

Testing your beliefs for accuracy can be really helpful in helping you find which beliefs are useful (and to keep maintaining) and which are not as beneficial (and it’s best to let them go).

So what is the benefit of maintaining the belief that you’re not an excellent hypnotic subject? Or that you can’t be hypnotized?

Especially since the actual evidence is dramatically opposed to that belief (and we’re talking about verifiable, scientific evidence based upon more than a century of research!)

In reality, most sane, rational, intelligent humans can be trained to be great hypnotic subjects.

Did we just say trained?

After more than 300 hypnosis sessions!

Interestingly, the feelings and ideas you bring to a hypnosis session may be completely unreasonable.

For example, suppose you think hypnosis will be like being under a general anesthetic. Or you believe you’ll have total amnesia for everything that occurred in the session. In either case, you’re probably setting yourself up for disappointment.

For many people, hypnosis doesn’t feel like anything specific or special at all. They might just experience a pleasant relaxation, but even relaxation isn’t really necessary for an effective hypnotic trance (Read: What Does Hypnosis Feel Like?).

In reality, there are as many ways of doing hypnosis as there are people on this planet, and once again, we test the model by asking if it’s useful.

If you’re the person who experiences hypnosis by just sitting there, you may or may not be relaxed. And you most certainly wouldn’t black out and go unconscious. You might not even experience much of anything at all.

So how do you know the hypnosis you experienced is useful?

There’s a simple answer to that question.

The hypnosis is useful if it works.

It’s useful if it helps you make positive changes, wipe out phobias, eliminate self-consciousness, whatever.

If it does the trick, it’s useful. And if it’s useful, you were hypnotized, whether you felt it or knew it or not.

And if you were hypnotized, that means you’re a good hypnotic subject.

A Brand-New Belief for You

So here’s what we’re suggesting…

Since beliefs function irrespective of reality, what if you were to adopt a brand-new belief that you’re a phenomenal hypnotic subject? Vividly imagine, or at least accept the possibility, that you’ve been wrong all along as far as your hypnotizability goes.

And imagine that from now on, you’re about to set things right by developing the full potential of your trance abilities and changing your life for the better.

You are an awesome hypnotic subject, and that’s a great strength to possess!

Keep it all fun and lighthearted. Treat it with a bit of good-natured humor, and then find a skilled hypnotist.

Don’t volunteer for a stage show or attempt to trance yourself out, at least not yet. Instead, you should find a hypnotherapist or a consulting hypnotist who has an actual office and sees real clients. Find someone with a track record and a lot of experience.

Explain your situation to them and tell them about this article. (maybe even send them a link to it!) They’ll understand why we wrote it and what we’re talking about.

They’ll do the rest…

Journey to the Castle

But if you really want to have a profound hypnotic experience right now, you can listen to our original hypnosis track called Journey to the Castle. It's totally free.

Use headphones and put yourself in a comfortable position for the best possible experience.