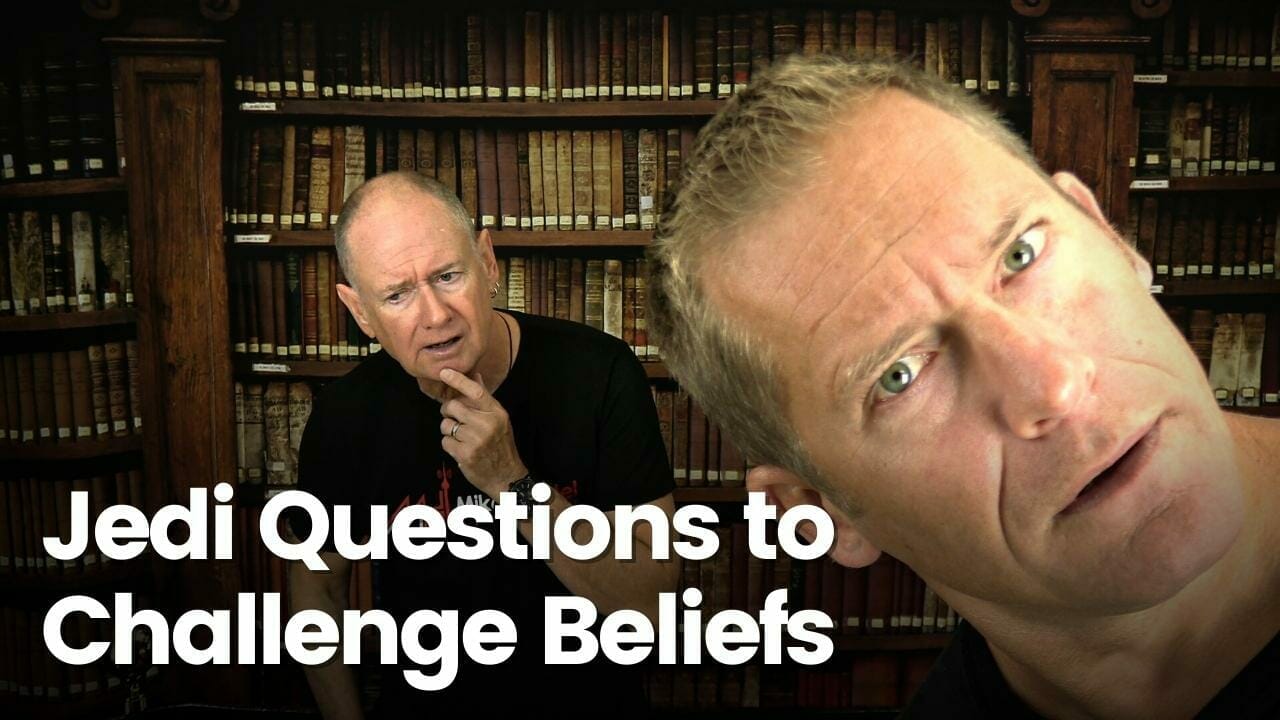 We are going to do our best with this blog post to help you challenge your beliefs or the beliefs of someone else. Before we get too deep into this subject, we want to explain that we don’t mean the beliefs you have are wrong or incorrect. That wouldn’t be very cool of us to say.

What we do mean, though, is that you might have some beliefs that are limiting you or holding you back from living the kind of life you really want.

Whatever the case may be, sometimes you need a new perspective or a different understanding of how you came to believe something or whether it’s true.

So we want to encourage you to be a little curious while you read this blog post because you’ll discover something we call Jedi Questions.

Jedi Question #1 - “How did you come to believe that?”

It may sound a little presumptuous, but asking someone, “How did you come to believe that?” can reveal a lot of useful information to you as well as the person being asked. Especially when it comes to unhealthy or unwanted behaviors, we believe that people need to be empowered with choice.

When you are able to help somebody take back control over their behaviors so they can choose something else, you are giving them back power over their life. The same thought applies if you are the person who wants to overcome an unwanted behavior or a limiting belief.

At a young age, your brain was like a sponge, soaking up as much information as it could so you could understand the world around you and interact with it as safely as possible. Everybody learns by observation, experience, and repetition. Even as a child, you would watch your parents, loved ones, and other people you trusted, and then you would attempt to mimic them. This is how you learned how to walk and talk!

Unfortunately, you also learned (and mimicked!) behaviors, habits, personality traits, and beliefs that were about as healthy as smoking an entire pack of cigarettes and eating fast food every day for every meal.

You watched, learned, and replicated the actions of others and adopted their beliefs because it allowed you to fit into the group and family unit. It allowed you to feel liked and accepted.

To put it another way, unconsciously you thought that if the people around you acted a certain way and believed certain things while surviving for as long as they have, then it technically should work for you too. Shouldn’t it?

Well...maybe. But at what cost?

While we can’t necessarily judge anybody regarding their beliefs or actions, what we can do is provide a quick way to critically think and ask empowering questions.

That is where the power lies, with the question, “How did you come to believe that?”

It allows whoever you ask (even yourself) to objectively look at the belief as though it was something you learned by accident. It isn’t your fault that you believe in the things you do but you can take responsibility for your own life and start to make other decisions, can’t you?

If you have an unwanted belief or thought, take a few moments and ask yourself this Jedi Question, and you may discover a sense of control that you had long forgotten about.

There can be a huge sense of relief the first time someone recognizes their ability to choose the way they think, believe, and feel. For some though, when they are asked how or where they learned the things they believed, cognitive dissonance kicks in.

Cognitive dissonance is when one's actions and beliefs don’t match up, causing a great sense of discomfort to the person experiencing the dissonance. If someone is feeling the unease of questioning their internal beliefs, they may dig their heels in.

When this happens, there is a wonderful Jedi Question we can follow up with, after asking “How did you come to believe that?”

This Jedi Question simply asks, “How do you know it’s true?”

The reason this question works so well is because you are asking them to provide evidence criteria for their belief’s origin and then asking them (if they are really digging in) how they know for sure whether their belief has any real factual foundation.

For instance if somebody said, “I believe the sky is blue,” and you followed-up that statement with the question, “How did you come to believe that?” their response might be something like -“Well when I look up at the sky I can see that it’s blue.”

And if you followed it up with the second question, “How do you know that it’s true?” they may respond with -“My science books in grade school taught me that color is really just a reflection of light bouncing off of objects and the wavelength of the light that enters my eye has a certain color associated with it. The sky is blue during the day because light is refracting off of the water droplets suspended in the air and creating the color blue that my brain perceives. This is also why the sky changes color as the sun sets and rises.”

By asking those two questions you discovered the evidence criteria for somebody’s belief about the color of the sky.

Now imagine doing that for a limiting belief you might have. Maybe you keep getting in your own way or you often find yourself in a pattern of unwanted behavior or emotion. This is a time to be curious about your beliefs and actions.

When you start questioning your own behaviors and habits, you open up the possibility to change and transmute what you currently do and believe into something empowering and motivating.

If you feel yourself struggling with a certain emotion or belief that is weighing down on you, then you can use the power of dissociation to help you. What do we mean by that? One thing the human mind excels at is the ability to shift and move the focus of its attention.

What you just did was something called dissociation and it’s the key principle behind NLP Perceptual Positions, as well as one of the hypnotic principles we teach in the Mike Mandel Hypnosis Academy. When you dissociate, you are shifting the focus of your attention outside of your body, putting space between you and the sensations you might normally experience.

The most awesome thing about dissociation, besides it being a neat mental experiment, is that quite often, when you dissociate from your body, emotional sensations will also dissipate or vanish. Thi

And while this technique can be used in a bunch of different ways, like relieving stress, headaches, or chronic pain, the main focus of dissociation in this article is using it to separate ourselves from unwanted emotions or belief.

Here is a quick step-by-step guide on using dissociation and the Jedi Questions together. Do this activity while standing.

Step 1: When you are aware of a limiting belief you have, like “I’m not good enough” as an example, notice what emotions rise out of thinking about the limiting belief.

Step 2: Locate the feeling in your body. Our friend David Snyder says, “If you can feel an emotion in the body you can change it.” Focus all of your attention on where you feel the emotion and how intensely you feel it. On a scale of 1-10, where 10 is the worst feeling possible, how high can you make the emotional sensation?

This step is also present in The Spin Technique.

Step 4: Now, step forward a few steps, leaving behind everything that was mentioned in Step 3. Notice what’s different now about your body and mind.

Step 5: Turn around and imagine you are looking at the “you” who is carrying everything you thought about in Step 3.

Step 6: Now, while looking at that other “you” ask yourself, “How did I come to believe that?” Wait for your mind to give you a response you feel is genuine. Then follow it up with “How do I know it’s true?”

Step 7: With this new perspective, notice what’s different about the “you” that you are looking at. Notice what’s now missing or discover the difference in how you notice them.

Step 8: Imagine this other you is now transforming into someone who holds new, updated, more empowering beliefs. When you are satisfied with the changes, step back into the original spot you were in (where the old “you” was). Imagine the changes naturally integrate into your being. Notice what’s different. Repeat as necessary.

Be ready to learn

We trust this simple 8-step activity helps you in your quest toward greatness! We sincerely mean that! If you are in the business of helping people, we trust you use these skills to really transform people’s lives in such a powerful and incredible way.

If you are interested in learning more, we highly recommend either claiming your two-week free trial of the Mike Mandel Hypnosis Academy. Or, we would consider joining our Personal Growth Membership.

The Mike Mandel Hypnosis Academy will teach you how to become an incredibly confident hypnotist without ever having to use a script. You’ll discover just how simple hypnosis is and how natural you will feel doing it. It’s easy once you discover the principles that make hypnosis work, rather than relying on a script that doesn’t really teach you anything.

Or, by signing up for our Personal Growth Membership, you’ll learn even more mind-bending, Brain Software upgrading techniques and tips to overcome stress, defeat the procrastination monster, and become mentally and physically healthy.

Of course you are free to choose between either of them because no matter what option you choose, you will unlock something brand new. That’s because we believe the secret to an awesome life is a simple matter of continuing to learn new things while having fun implementing them, in baby steps, in your own life.

If you don’t think you have the power to live an awesome life, then we have two questions for you.

How did you come to believe that?

How do you know that it’s true?