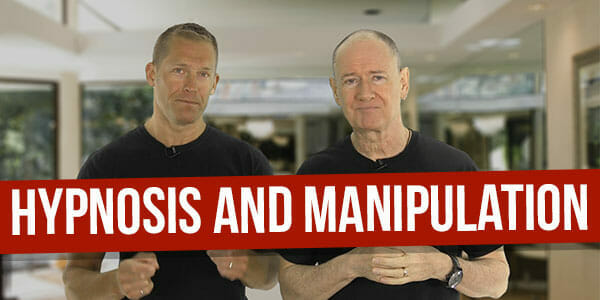 Is hypnosis manipulative, evil and unethical? If you pay attention to people who don't know any better, you'd be led to think so.

We made this video as a fun way to differentiate between hypnosis as a tool and manipulation as the intent behind a behaviour.

Looking for the hypnosis language cards shown in the video? Get them here.

Transcript of the video:

We’re hypnotists and hypnosis trainers, and we teach people how to communicate hypnotically.

But we’ve also been told repeatedly that **hypnosis is manipulative and wrong.**

People have been going out of their way, to manipulate us into thinking that hypnosis is manipulative!

So we’re going to manipulate you right now to consider another viewpoint. But we admit it, so it’s okay.

But hang on a second … Hi Chris!

Hi Mike! Oops...I was just manipulated into saying that.

He’s correct, but in all seriousness, this video is about hypnosis, communication and manipulation.

We often laugh at some of the comments on our posts and videos. For example we promote our hypnosis language cards as a way to practise hypnotic communication.

And people comment that hypnosis is always manipulation and we should stop doing it right now!

But is that really true? And what is hypnosis, anyway?**

And come to think of it, what is manipulation?

The dictionary says manipulation is to control someone or something to your own advantage - often unfairly or dishonestly.”

So saying Hi to someone is not manipulating them. That’s because we’re not taking advantage of someone. It’s not unfair or dishonest.

And if this was manipulation, then ANY communication would be manipulative because we’re always trying to get a response.

It might be useful to just change the way you think about hypnosis.

Stop thinking of manipulation. Instead, think of amplification. Hypnosis is an amplifier of experience.

Whatever a person can do, you can probably do it better in a hypnotic state.

And yet … People naturally enter hypnosis all the time.

You can be in hypnosis when zoning out on a long drive.

Or cheering for your favourite sports team.

That’s because hypnosis doesn’t mean you’ll have your eyes closed or look like a zombie.

So now we’re saying that hypnosis is an amplifier.

By using hypnotic language **we can engage someone’s emotions** to motivate them to take action or change how they feel about something.

I wonder when you’ll you’ll realize this is how advertising works.

But can’t hypnosis be used to control people?

People are constantly emailing us with links to YouTube videos proving that hypnosis is mind control.

And we say: You have to check the facts. After all, it’s YouTube, not necessarily TrueTube.

But don’t get the wrong idea! We’re certainly not knocking YouTube, are we?

Definitely not! We love YouTube and have a ton of our own videos and podcasts there.

So...if hypnosis isn’t manipulation...then what the heck is it?

Let’s keep it simple. It’s really all about communication.

The bottom line is a hypnotist helps a subject become receptive to suggestion.

This is true either for a formal therapeutic session or a conversation designed to help someone change.

And hypnosis makes it more likely that someone will act on something that is suggested.

But even when the subject is in that receptive state, it doesn’t mean that anything goes, right?

Right! The subject has a part of himself that’s always observing. If that part doesn’t like what’s being suggested, he’ll either ignore the suggestion or emerge from trance.

So if there’s only the illusion of hypnotic control, why do people in stage hypnosis shows do crazy things, like quacking like ducks?

But what about “hypnotic language”? There are decks of cards that you can buy that teach you to “speak hypnotically”…

Yes there are! In fact we created our own awesome hypnotic language cards. But it still isn’t manipulation.

That’s because even though the language is designed to connect with the deep mind, and even though it’s conversational hypnosis…

Imagine being able to hold someone’s focused attention and elicit emotions that help them to make positive changes? Would that be useful?

Hypnosis is awesome. It’s much more than helping people to quit smoking. It’s a powerful tool that can enhance healing.

And that’s not all! It can reduce physical pain, get rid of social anxiety and cure phobias.

It can be used as an anaesthetic in dentistry or surgery, and help athletes and actors perform at their best.

And it can help you perform at your best.

And that’s why we love hypnosis, we love teaching it to students from all around the world.

So hypnosis isn’t manipulation. It’s only a tool, like a hammer or wrench. But it’s a powerful tool that can fix problems … and build a better life.

And best of all … you can use hypnosis to manipulate your own life. Visit us online at MikeMandelHypnosis.com