Hypnosis for Anxiety – Everything You Need to Know

Hypnosis for Anxiety – Everything You Need to Know

How to Use Vocal Tonality for Better Results in Hypnosis

How to Use Vocal Tonality for Better Results in Hypnosis

How to Hypnotize Difficult Subjects With the Ego State Preframe

How to Hypnotize Difficult Subjects With the Ego State Preframe

How to Get Eye Closure in Hypnosis

How to Get Eye Closure in Hypnosis

How to Hypnotize Analytical Subjects 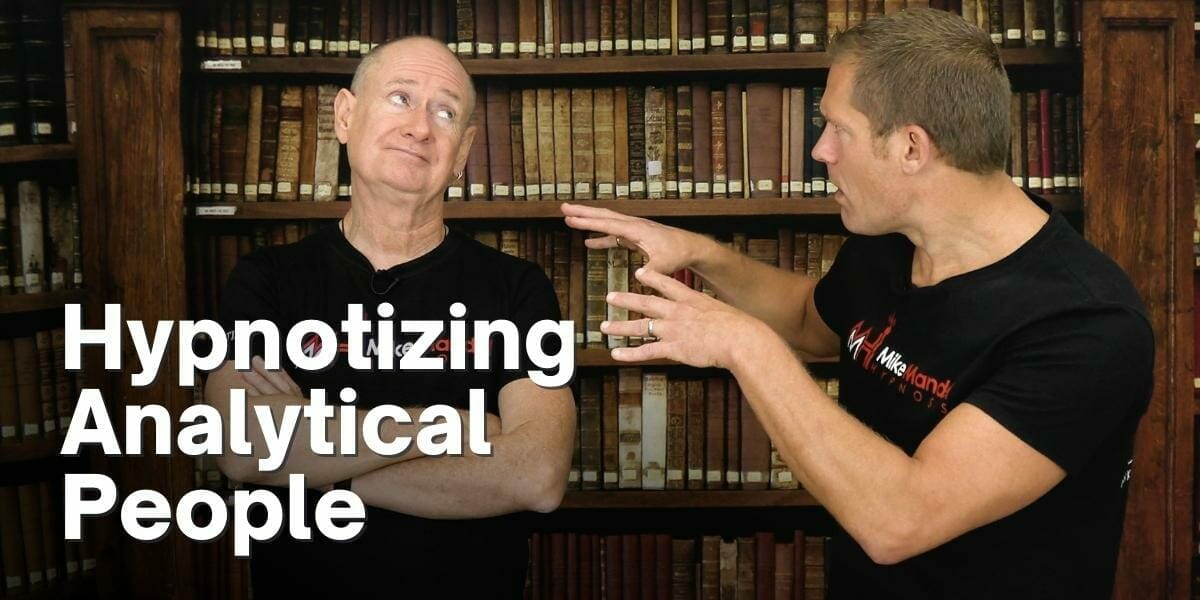 Being highly analytical is an excellent skill, and useful in many contexts.

But there’s at least one thing analysis will not help you with at all, and that’s being a good hypnotic subject! In fact, analysis during a hypnosis session can short-circuit results, and waste a lot of time too.

When we analyze, we take in information and then sort through it. Sorting enables us to discard what isn’t needed anymore, and is the real essence of analysis. Those without analytical ability find it difficult to make decisions or prioritize information.

But hypnotic trance isn’t the best place to be using your consummate analytical skills.

Hypnotist: ...and you can feel yourself beginning to relax…

Subject: No I can’t.

Hypnotist: ...and you’re sinking into that chair…

Subject: No I’m not!

Hypnotist: Now your eyes are getting very tired…

Subject: Not working on me!

This example might seem ridiculous, but it’s actually pretty close to what actually happens when Uberhypnotist meets Hyperanalyzer.

Not surprisingly, if the subject is also a hypnotist, it can compound the problem. This is because the subject will be constantly analyzing the other hypnotist’s hypnotic technique!

When you think about it, it makes perfect sense for a person with good analytical ability to rely upon it all the time. Afterall, it’s a powerful skill, and the analytical subject will naturally bring it into the hypnosis session.

Amazingly, an over analytical subject is not really that difficult a problem to solve. By following just a few principles that I’ll mention in this blog post, you’ll soon have even the most analytical subjects zoned through the floor.

The Principle of Overload

The late, great hypnosis and NLP trainer, Derek Balmer, taught an amazing way of dealing with the hyper analyst.

Once Derek determined the subject in front of him was highly analytical, he’d say something like this:

Now here’s how I want you to proceed...Stand upright and tilt your head back so you can see the ceiling, and close your eyes.

In a moment, I will start rotating you in a circle and you’ll follow my lead, and keep turning with your eyes closed...and then you’ll begin counting out loud, down from 400 by threes, seeing each number in a different colour...as you continue to spin in a circle…

And when it’s too much trouble to continue, you’ll simply drop into a trance and I’ll take over.

Notice the degree of overload here. There is such a huge amount of information to track, and continue tracking, that it’s impossible to keep analyzing.

The subject’s head is tilted back, her eyes are closed while she’s rotating in circles, and she’s given a complex counting task, that requires her to visualize in different colours.

No wonder it’s easier to just drop into a trance!

Basically we can overload a client in any way we choose. It was American Psychologist, George Miller, who spoke of the Magic Number 7, plus or minus 2. Miller believed that we could only hold about 7 bits of information in our conscious awareness; some people as many as nine, and some as few as five.

By filling these containers with information, it’s a simple matter to create overload, and turn it into a trance.

But maybe you don’t find the idea of spinning a client who’s counting in different colours, a very appealing idea. If that’s the case, there’s another way you’ll probably like.

I’m talking about a phenomenon known as catalepsy.

I first heard about catalepsy when I was about 12 years old, and was reading a Dracula comic. In the story, a woman who had been attacked by the vampire was rigid and non-responsive, and described by a doctor as “cataleptic”.

The good news is, you don’t have to be attacked by a vampire to experience catalepsy! It happens naturally, and occurs a lot in hypnosis.

So what exactly is catalepsy?

Basically, a cataleptic muscle group just stops working, but not in a pathological way. It might be a hand that hovers in the air, weightless. It’s also what happens when someone’s eyes don’t open, in response to a suggestion.

A person whose legs are cataleptic cannot stand up, no matter how much he struggles.

Catalepsy is also a brilliant aid to getting analytical clients into trance.

In our academy, we teach several catalepsy inductions. This enables us to immediately give the subject an unexpected experience that makes their analysis irrelevant, which the same principle behind suggestibility tests.

That’s because we never tell the subject in advance what we’re going to do. Instead, once we are ready to do the trance induction, we simply create a cataleptic arm or hand.

In one method, again from Derek Balmer, the subject imagines a little shelf at his side, down by his hip. Then I simply have him close his eyes, and then take his hand and place it on the non-existent shelf, and miraculously, it stays there!

I don’t tell him that his hand is going to float in the air, or that it won’t sink down. I simply put it on the imaginary shelf, and catalepsy is automatic.

Once I have created a cataleptic hand, the analysis stops completely, or is irrelevant. Now that his hand is floating, he can analyze it all he wants, because he’s well on his way into trance.

Amazingly, in just a matter of seconds, the motion automates, and the hypnotist can remove his own hand and let the subject’s hand float in the air.

This cataleptic hand can then be instructed to rise higher, sink down, deepen trance, whatever. It works because the subject has an experience that is unsuggested, and he can analyze it all he wants. It also means there’s no internal argument with what the hypnotist is saying.

The cataleptic limb just is.

Because the catalepsy occurs outside conscious knowledge or control, it creates a really fast way to get past the subject’s critical faculty, and trance ensues.

Overly analytical subjects do not have to be problematic for a hypnotist of even moderate skill.

Through tools like overload, and the creation of catalepsy, a hypnotist can side-step the subject’s analysis, creating a powerful and robust trance.