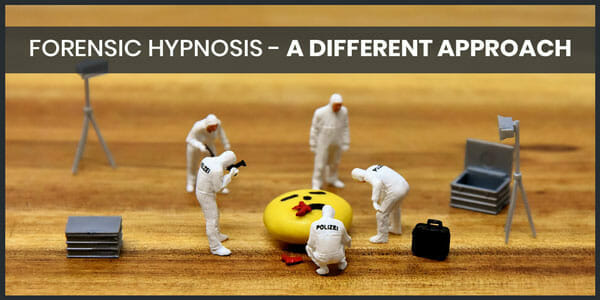 Note: This article on Forensic Hypnosis was written by Mike Mandel for ReSource Magazine several years ago. He dug up the original DOC file, so we’re publishing it here on the blog for everyone to enjoy. All the events in this article actually occurred. A few details have been changed to protect the privacy of the individuals involved. 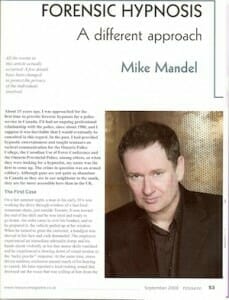 About 15 years ago, I was approached for the first time to provide forensic hypnosis for a police service in Canada. I’d had an ongoing relationship with the police, since about 1980, and I suppose it was inevitable that I would eventually be consulted in this regard. In the past, I had provided hypnotic entertainment and taught seminars on tactical communication for the Ontario Police College, the Canadian Use of Force Conference and the Ontario Provincial Police, among others, so when they were looking for a hypnotist, my name was the first to come up. The crime in question was an armed robbery. Although guns are not quite as abundant in Canada as they are in our neighbour to the south, they are far more accessible here than in the UK.

On a hot summer night, a man in his early 20’s was working the drive through window of a fast food restaurant chain, just outside Toronto. It was toward the end of his shift and he was tired and ready to go home. An order came in over his headset, and as he prepared it, the vehicle pulled up at his window. When he turned to greet the customer, a handgun was shoved in his face and cash demanded.

The employee experienced an immediate adrenalin dump and his hands shook violently as his fine motor skills vanished and he experienced a slowing down of visual motion in the “tachy psyche” response. At the same time, stress driven auditory exclusion caused much of his hearing to vanish.

He later reported a loud rushing sound that drowned out the voice that was yelling at him from the vehicle, although he complied with the perpetrator and handed over the money. He was in phase 3 of the triple F response: He couldn’t fight or flee, so he froze. Then just as suddenly it was over. The vehicle, which he now recognized as a gray van, was at the other end of the parking lot and escaping through the exit.

The detectives brought the young man to my home a few weeks later, in the hope of triggering sufficient recall to find the criminal. Back in those days, I worked with a fairly typical method, regressing the subject into the event, while setting up a number of powerful resource anchors in case he began to abreact. I was counting on the stress of the event causing a norepinephrine release from the adrenal medulla, which would serve to “set” the memory.

The most bizarre thing about the case was how the induction played out. I began a purely verbal Ericksonian induction and the subject showed good indicators of rapidly developing a state of trance, including an obvious hypnotic rash in the hollow of the throat. Then he suddenly opened his eyes and asked “Aren’t you going to use the swinging locket?” I utilized his response and immediately told him that of course I was going to use the swinging locket method! I’d just been testing his susceptibility, and he was a very good subject…I ran upstairs and rummaged through my wife’s jewellery box, and found something on a chain. I ran back downstairs and swung it in front of his face a few times and he immediately sank into a profound trance with no verbal pacing whatsoever.

I regressed him to the food order just prior to the robbery and asked what the previous customer had ordered. He rattled off the quantity of burgers, fries and drinks and immediately provided the correct price when I asked him what the cost had been. Then we proceeded to the robbery. He noticed the appearance of the driver and was even able to describe a second man that he’d consciously forgotten about. I lifted his hand as he spoke and it hung cataleptic in the air.

We moved forward in the event until the van had driven away and was about to leave the exit of the parking lot. I asked him to freeze frame the picture and focus on the license plate. He responded that it was too far away and too dark to see. I suggested he zoom in on the vehicle and turn up the brightness. These submodality shifts immediately provided more information. He remarked that the license plate was not from the province of Ontario, but Quebec. He then provided 6 letters and numbers that he could “see”. This gave the police sufficient information to begin searching.

The perpetrators were never caught, but the gray van was found abandoned on the Ontario/Quebec border. It was indeed a Quebec license plate and 4 of the digits were correct, even though the van had been in the dark, nearly 100 feet away, and the subject had made no effort to consciously remember or even notice the plate. The case was re-enacted on the Discovery Channel in the programme Mystery Hunters, and Richard Bandler makes a brief mention of it in one of his books.

That marked the only occasion I used a regressive/associated method to attempt to access archived material. Although the result had been compelling and encouraging, I was extremely concerned about the inadvertent creation of paramnesia, or FMS (false memory syndrome).

I’ve demonstrated in the past how a well-meaning interviewer or therapist can easily create and install whatever it is that they’re looking for, including so-called memories of Satanic ritual abuse. I would ask a police officer to stretch out in a chair and close his eyes, pretending to be at a summer cottage. Within 10 minutes and with no induction, I could create an alien encounter memory, purely through judicious questioning.

As all NLP practitioners know, it is impossible to access any memory without altering it to some degree. The very process of interviewing someone, particularly during a hypnosis session, has the potential for real harm, insofar as inaccuracies and falsehoods can be created by the hypnotist. (For more information on legal and psychological protocol when working with forensic cases, I recommend Forensic Hypnosis by Hibbard and Worring.) With all this in mind, I developed a new methodology:

It seemed reasonable that avoiding associated states and possible abreaction was the place to start. I came up with a method in which I would utilize a rapid induction and then give metaphors for recall. There were many advantages to this method. First of all, metaphor tends to function best in waking states or light hypnosis, as the content distracts and entertains the conscious mind while the structure works on the unconscious.

In deep trance, we need to be much simpler and specific, as we have greater access to the unconscious, due to the increased permeability of the critical faculty. Also, a forensic hypnotist seldom has to appear in court if his or her work is elegant, and working with metaphor permits me to access the psychodynamic process of remembering, without ever speaking to the subject about the details of the case in question.

Obviously, if I don’t know anything about the case, it’s much harder to lead the subject. I got to test my new method a few years ago in a sex offense crime. A counselor for a women’s shelter was sexually assaulted by a man who had been waiting in the dark near her car. What complicated the case was the assailant was dressed in women’s clothing, wearing a wig, and made up to look like the counselor, whom he’d obviously been stalking. The victim was shown 16 photographs of suspects who fit the profile, but she was unable to provide any information, due to the wig and make-up. The police hit a dead end and called me 5 weeks later, and we agreed to meet with the victim the following week.

I gave a taped deposition to the police videographer and began the induction which caused an immediate trance. I then told the subject a double metaphor. The first part suggested walking in the sun on a beautiful beach where she finds an old-fashioned skeleton key lying in the sand and decides to carry it with her.

During the story telling, I ensured that V,A and K were all accessed and took the time to build a vivid representation by overlapping from one system to another. Note that I associated her into the metaphor, rather than into the traumatic event. I then moved into the second phase, which involved finding a “warm, cozy, friendly old house…with cupboards and drawers…full of memories…where you can find what you need to find…” the last part of the phrase being analog marked as an embedded command.

The descriptors of the house help to prevent any negative associations with being in an old house alone. She was protected further by the Ericksonian method of saying “my voice will go with you…and be your link to this time and place…” I watched the subject closely and saw her eyes moving under the lids as she explored the house, until after only a few minutes, I observed a shift in her analog behaviour and gave her permission to come back at her own speed, bringing everything she’d found. (Notice the presupposition.)

The skeleton key was not mentioned again, but the message to the unconscious was clear: You have the means to unlock the memory now. She came out of trance, and in less than 5 seconds, identified one of the 16 suspects as her attacker. The police went to make the arrest and he practically ran out of the house, confessing to the crime. It turned out he was producing 14 times too much testosterone. He underwent chemical castration in a Toronto psychiatric institute.

This became my method of choice for forensic hypnosis, and it’s served me well in numerous cases, including murder investigations. Clearly, more research needs to be done in this area, but I believe the combination of simplicity and the avoidance of abreaction and FMS, make this a powerful weapon for the psychological arsenal, in the ongoing battle against crime.