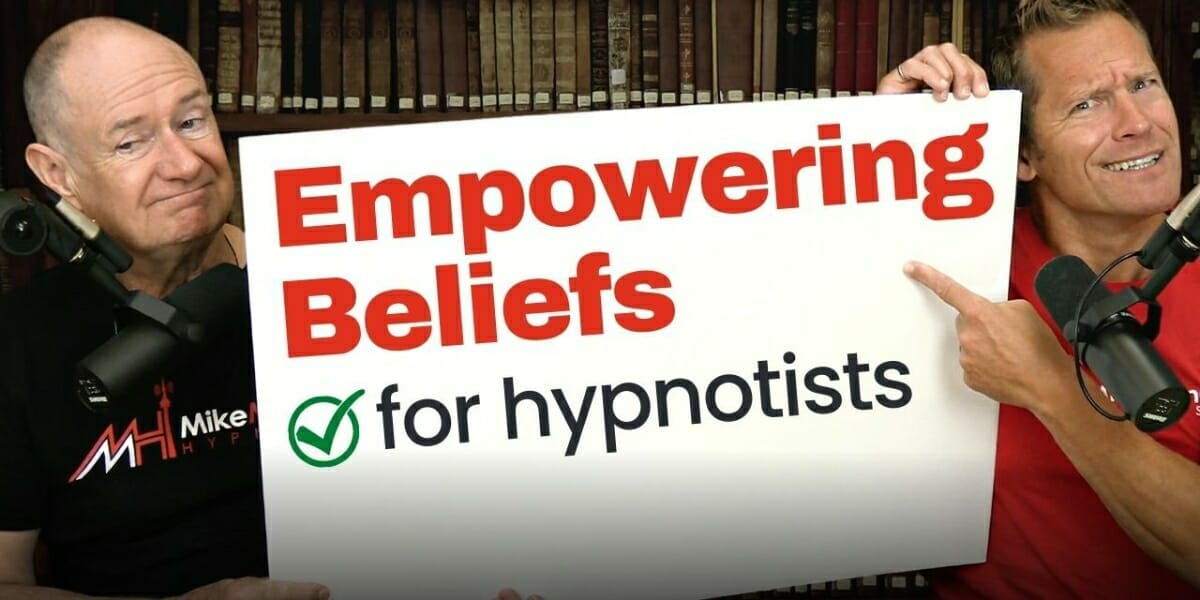 In this blog post, you'll learn three empowering beliefs that will give you great hypnotic confidence once you've adopted them.

Briefly, the three empowering beliefs are:

As you continue to read this blog, consider how adopting these beliefs will really help you to be a confident hypnotist.

Before we begin, we must ask this question:

What do you believe about hypnosis?

And perhaps more importantly, what do you believe about your own hypnotic abilities?

Your answers to those questions will largely determine your skill as a hypnotist, whether onstage, doing a demonstration for friends, or in a therapy situation.

In this article, we'll discuss useful beliefs to adopt as true. They're just another model, but the test of any model is its usefulness, and these are all beneficial beliefs to hold.

So by adopting these beliefs as though they are true, you'll smooth the way toward being an effective practitioner of scientific hypnosis.

The AS IF Frame

Let's look at the best way to create and utilize new beliefs about hypnosis. The key is to REALLY believe the ideas we'll talk about as truth.

But how do you do that? How can you believe something that you might not believe?

It's pretty easy, and it's something parents always do.

When parents tell their kids about Santa Claus or the Easter Bunny, they generally have no trouble believing them. That's because the parents speak and behave as they would if St. Nick and the rabbit were real.

In this example, the parents use the "AS IF" frame, meaning that they acted as if the fictional characters were genuine. But you don't just pretend in an offhand way. You make a point of being utterly congruent that whatever belief you're adopting is as true as true can be. That's the difference that makes all the difference.

Strong beliefs have a powerful effect on neurology and psychology as well. So when you ponder this list of useful beliefs, pretend they're all true. And then pretend you're not pretending anymore …

The late hypnosis trainer Tad James has stated that a subject will not actualize what a hypnotist does not believe to be true. It's as though something in them detects doubt and insincerity.

How would I think, speak and act if this belief was true?

Choose to believe that you're an excellent and successful hypnotist.

Then continue to believe it!

Here are some powerful beliefs we recommend you immediately adopt that can help you become a genuinely great hypnotist:

All hypnosis is self-hypnosis!

By adopting this belief, you'll find it lets you off the hook. What we mean by this is IF all hypnosis is self-hypnosis, it's not your job to put someone into a trance. It's your subject's responsibility to go into one. When you explain this belief to your subject, the power of this belief magnifies (Read: Hypnotherapy vs Self-Hypnosis: Which is Better?.)

A well-motivated subject will follow your instructions and take on the task of going into trance because that's their job. It's what they're supposed to do. A subject who understands that it's all up to them will follow instructions and go into a trance, instead of just sitting there passively and waiting for something to happen.

Another way of looking at it is:

The subject does the whole thing and is the one who creates the trance!

You’re off the Hook

So we've seen that putting the responsibility for going into trance onto the subject makes it impossible for the hypnotist to fail.

And here's another belief that can help you be a success:

Hypnotic trance is a naturally occurring phenomenon that happens all the time!

There's nothing strange or mystical about hypnotic trance.

Most people experience hypnosis pretty well every day. They go into trance while zoning out, watching television, driving long distances, reading novels, and a host of other ways. When your client understands this, then issues about going into hypnosis disappear entirely.

So educate your subjects. Teach them that trance isn't like having a general anesthetic; it's a normal part of everyday life.

Once your subject knows they've already been in trance many times, with no blacking out and becoming unconscious or having any extraordinary sensations, they become very open to the natural reality of hypnosis (Read: Hypnosis Is Everywhere – Naturally Occurring Trances.)

The more you can convince your subject that hypnosis is normal and natural, the better results you'll achieve!

But What About Bad Subjects?

The myth of the "bad subject" is one of the greatest concerns of the newbie hypnotist, and it is a myth!

We can understand why this is stressful! What could be more embarrassing than a bad subject?

Who wants to take up hypnosis and have it all crash and burn just because the would-be hypnotic wizard got a subject who could not go into trance at all?

Back in the 1950s, hypnosis research was happening all over major universities. And after working with hundreds of volunteers, the researchers determined that while perhaps 10% of people were excellent subjects, a certain number were not hypnotizable. The researchers then proclaimed them to be bad or perhaps poor subjects.

But is that an accurate evaluation?

We believe it's nonsensical and results from some rather silly research. Back in those early days, people played music on vinyl records in their homes, and hypnosis researchers used this amazing new invention by attempting to induce trance in groups of volunteers.

The researchers played an identical hypnosis recording for everyone and then drew conclusions. Naturally, some people went into hypnosis, and some didn't. But the induction method was flawed, not the volunteers themselves.

Today, we realize that hypnosis is a very individual thing, and no single induction will work for everyone, including playing a vinyl record that endlessly drones on and on about relaxation and sleep.

Our final belief that's worth keeping in mind:

There are no bad subjects, just inflexible hypnotists!

Although we've stated earlier that the subject is responsible for going into trance because all hypnosis is self hypnosis, there's another side to this.

Even though the subject is the one who goes into trance, it's the hypnotist who needs to match a particular induction to the subject. The hypnotist might choose this induction due to information learned in a pre-talk, or perhaps it's one that's worked for the client before.

Flexibility is the key. When a hypnotist carefully observes a subject, it's simple to change techniques seamlessly if something isn't working (Read: The Importance of Calibration in Hypnosis.)

This kind of hypnotic flexibility comes only with experience, and a good hypnotist will have a wide variety of inductions and deepeners to draw from as needed.

Adopting these beliefs and carving them (metaphorically) into stone, you'll be well on your way to becoming a world-class hypnotist!

When you are ready to continue your journey toward becoming world-class hypnotist, we'd recommend starting a 100% free Test Drive of the Mike Mandel Hypnosis Academy. You get the first four lessons of MMHA free for 14 days without ever needing to put in your credit card. It's the easiest way to start learning hypnosis.