What Are Ego States, and Why Do They Even Matter? 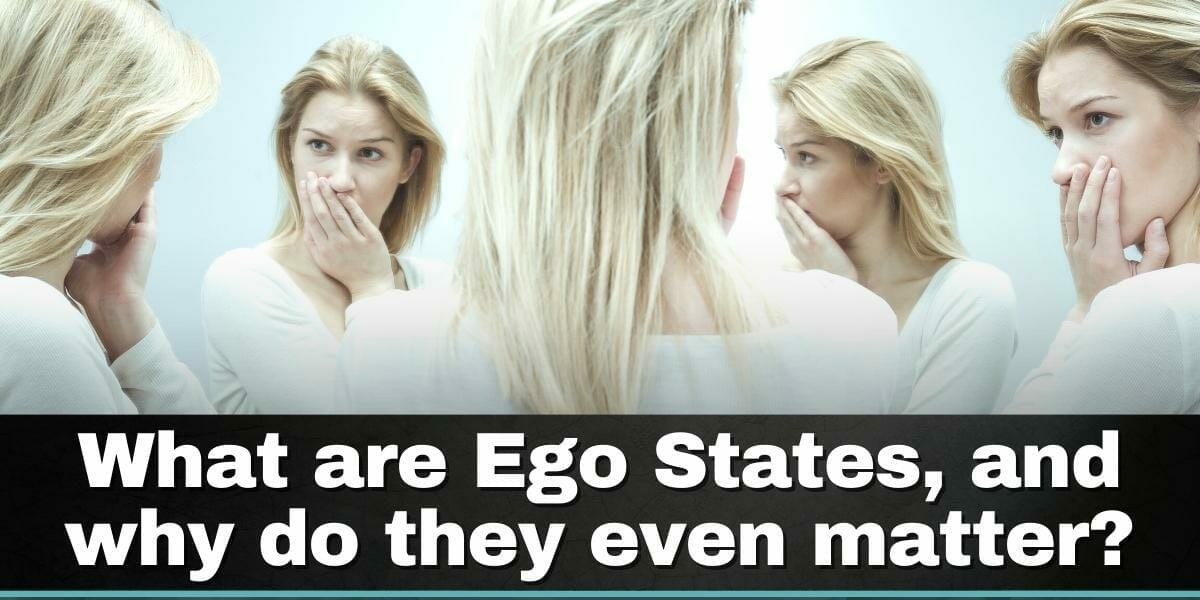 Imagine you’re in a discussion with a good friend, and you mention a particular toy you had as a young child. To your amazement, your friend stares into space with a slight smile, and then says “Mommy bought it for me! It was the best!”

Or perhaps you leave the room you’re currently in, and find yourself in a different room asking "What on earth did I come in here for…?"

Or there’s that friend of mine who is a placid doormat of a character, but he becomes an enraged monster as soon as he gets behind the wheel of a car.

These three different examples have something in common: ego states.

What Are Ego States?

Ego states are us.

Actually, they’re multiple versions of us.

But whatever you call them, they are a compendium of different aspects of YOU. In fact, when you point at yourself, you’re pointing at an ego state, and it’s an ego state reading this article now…

Ego states are digital, which is like an on/off switch. This means that one, and only one state, can be running the show which is your life, at any given moment. When an ego state is the one that’s in control, it’s said to be Executive.

These parts of you were created in childhood to perform certain tasks, and you have a lot of them; maybe up to about 150. But the same 10 or so will run your daily life, since our lives tend to be pretty repetitive.

Other ego states haven’t become executive in years, but are still there, lurking in the background.

You have an ego state that tells you when you’re hungry and it’s time to eat, and another one to tell you that you’re tired, and should  go to bed.

But there’s much more to ego states than internal clocks. In the field of hypnotherapy, we could even say that every problem is an ego state problem.

As you can imagine, these states are all very different from each other, and have different cues to tell them to become executive, when they’re needed for their task.

For example, I have a chef’s hat in my kitchen, and the instant I put it on to cook, my cooking ego state becomes executive. When I start waving a cat toy around for my Mau, my cat-playing ego state shows up for the game. And once I step onto the Jiu Jitsu mat, my hand-to-hand combat instructor state shows up; much as he will automatically, if a person becomes violent or aggressive toward me.

Ego states have specific skills and do a good job; provided the one that is executive, is the right one for the task at hand.

When the wrong one shows up, things can go off the rails.

Imagine if I come out of a nice restaurant after supper, and some drunken psycho on the street picks a fight with me. Naturally, I want to ensure that I’m able to end the conflict, by efficiently shutting him down, which means I need my Brit Jiu Jitsu state to be executive.

But imagine if the unthinkable happens, and instead of my essentially fearless and skilled fighter state, my friendly and gentle cat-playing state becomes executive?

Or my “let’s cook dinner” state?

Or my gentle and compassionate therapist state?

If this were to happen, the state in the executive would not like being there. We say that it is a dissonant state, one that is ill-equipped for the demands of the moment.

The key to living well  is to have the most resourceful state for a particular task, become executive, when you need it to be. The right one for the job will be the best one for the job!

Although most of our ego states will be healthy, doing the tasks they enjoy, and highly-functioning, there is another type of ego state that doesn’t fare so well. This is known as a Vaded ego state.

Vaded is shorthand for a state being invaded by fear, anger, sadness, or trauma.

Vaded states have problems, dating back to something that happened in the past, usually in early childhood. Phobias, panic attacks, recurrent grief, physical pain, can all be tied to vaded ego states that become executive due to circumstances or triggers of various kinds.

If you have vaded ego states, a good therapist or hypnotherapist can help you access them and heal them, often in just one session (Read: Getting to the Real Issue With Hypnosis).

Sometimes ego states don’t get along with each other, because they have completely different points of view. An adventurous ego state might be prompting you to book that amazing and expensive safari that you’ve always dreamed about.

But another more frugal ego state might stand on the brakes, because you really need to get out of debt. If you listen carefully, you can often hear the shifts in a person’s tone and see their body language and even facial expression change, as different ego states become executive.

Conflict between what we want to do, and what we should do is a fairly typical experience. We want to eat better to lose weight, but that chocolate cake is too good to have just one piece.

Whether or not we eat the cake will depend on which ego state is strongest and able to get its own way.

It is our considered opinion that addictions of many kinds are ego state problems. From this viewpoint, something called Retro Avoidance states are to blame.

Let’s say someone has an addictive behavior that they have difficulty overcoming. We believe it’s because there’s a vaded state in the background that feels pain due to trauma, and it just doesn’t want to become executive, where the pain will be excessive.

A retro avoidance state becomes executive when the person is stoned, drunk, compulsively gambling, whatever. It remains executive to keep the vaded state out. That way the pain is never consciously felt.

It’s easy to see this at work when a person is unable to feed an addiction, which causes anxiety to rise as the vaded state is being forced into the executive. Just hide a chain-smokers cigarettes and watch what happens…

By helping the client face their pain and heal the vaded state, a good therapist can do much to eliminate addictive behavior.

We are more than individuals; we are all committees of different parts which need to be healthy with strong neurological connections between them.

When there is little or no conflict, no trauma to resolve, and the ego states are doing tasks they actually enjoy, we experience integration (Read: Self-Work With Ego State Transformation).

It takes work and determination, but dealing with our 100 or more ego states can be a long but fascinating journey!

So why do ego states matter?

Because ego states are us!

And I’m sure the ego state that just read this agrees with me.

If you are intrigued and want to learn more about ego states and how to negotiate with them then join the Mike Mandel Hypnosis Academy to learn more.