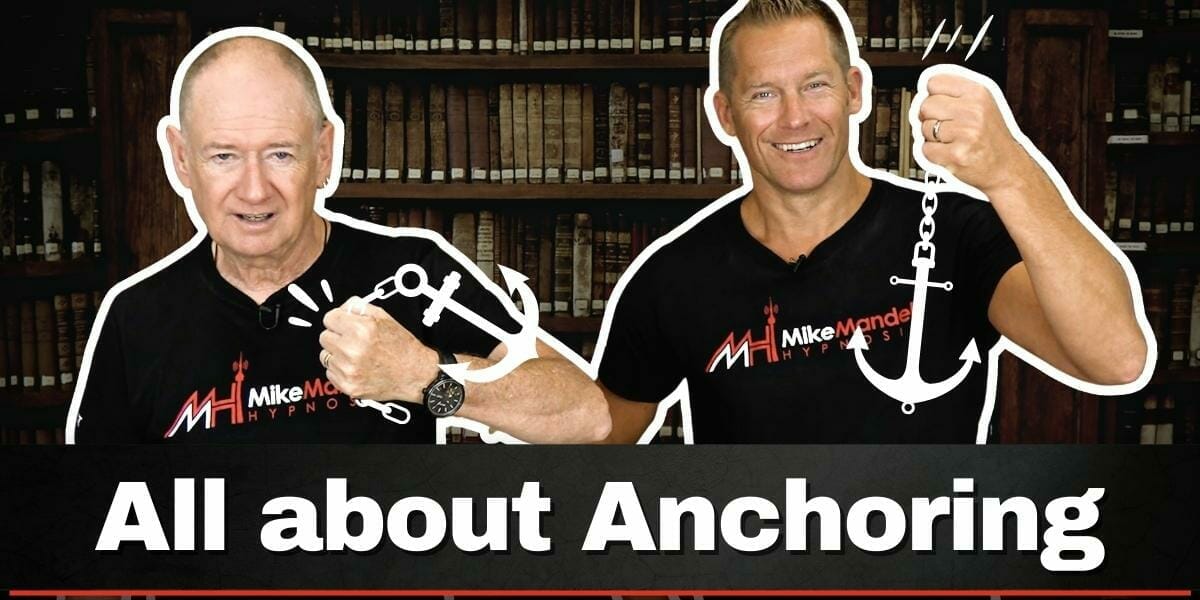 Anchoring is one of Neurolinguistic Programming (NLP) key elements, and one of the most resourceful tools one can apply in hypnosis.

What if you could instantly be your best you? And what if all it took was pushing a button…

It may not be quite that dramatic, but you can get truly amazing results with the power of anchoring. To understand this, watch the video below or read the rest of this blog post.

So What the Heck Is an Anchor in NLP?

An anchor can hold a ship in place, help win a game of backgammon, or put you in a really good, or really bad state. Obviously, there are several meanings for what an anchor is, but it’s the last example that we are using here.

A Good or Bad Switch?

It might be a particular song that takes you back to a memory or a particular time in your life. In my own case, I only have to hear American Pie by Don McLean, and I’m eighteen years old again; at least in my mind.

An anchor will switch on a particular state, that may be powerfully positive, or terribly negative. An anchor might fire you into a very resourceful and powerful blend of mind and body, that makes it easy for you to excel at sports, or just about anything (Read: Chain of Excellence: Your Easy Button for High Performance).

But when a negative anchor fires, even by accident, it can leave you unresourceful and largely inept. It may occur in a single area, like public speaking, or in huge areas of your life, like your self-image.

Even so, an anchor isn’t good or bad, any more than a light switch or computer switch is good or bad. The bottom line is: Does that particular anchor fire a resourceful state, or a non-resourceful one?

Whether or not we’re consciously aware of them, there are anchors changing our behaviour and state throughout the day.

And in all of these examples, we didn’t decide to install these anchors. They’ve just installed on their own, without our conscious permission or even awareness. That’s because they are wired into the neural pathways of our brains, and not just something we imagine.

But what about some positive examples?

Naturally, these are only examples, and everyone will have their individual anchors that are unique to them.

Negative Anchors Can Wreck Your Life

In the 1990s I was a therapist, and ran into an unusual case.

I was a friend of a man and his wife who fought a lot. It seemed that they often wound-up in stressful shouting matches, despite the fact that neither of them enjoyed them at all and wished they could stop.

To their credit, they worked on their marriage a lot and were making real progress.

And then they decided to vacation in a beautiful national park on Canada’s East coast.

They both loved the outdoors, and were having a wonderful time together, just hanging out, and renewing their marriage.

And that’s when it all went off the rails…

As my friend described it to me, he held his wife’s hand and looked into her eyes, and that was the last thing he remembered, because a horrendous screaming match developed, right in the middle of the forest.

He didn’t know it then, but an anchor had fired, instantly sending them into unresourceful states, and launching verbal missiles at each other.

Anchored by a Therapist

When I interviewed them later, we discovered what had happened.

A well-intended, but inept psychotherapist, had given them advice that had put a bomb in their marriage. And none of them knew it was there, waiting to detonate.

So what was the bad advice?

My friend and his wife were told it was okay to argue and sort things out, which of course was true. Not talking about problems is a disaster waiting to happen. But the advice was horrendous.

The therapist said that when they were fighting, they should hold each other’s hands, and look each other in the eye.

And of course, their horrendous argumentative states got anchored to that touch and that look. And what made it doubly bad was that it anchored both of them!

The Power of Peak State

The good news is, anchoring can be done consciously too. And this is a great way to undo a bad anchor and make it dissolve.

The key is: An anchor is best when set at peak state and, when the positive state you’re in is at its highest level. So how do you do this?

This sets the anchor in three different systems, Kinesthetic (touch), Visual (sight) and Audio (sound), which enhances the effect.

An alternative is to press the pad of your first finger against your temple as you take a deep, powerful breath.

So when do you do this? Whenever you notice you’re in a great state, and that it’s at a powerful level.

You might be doubled over laughing, watching a great comedian, or your sports team rescues a crucial game in the last few seconds. Or maybe you’re having a romantic dinner with a significant other - another excellent anchoring moment.

Fire your anchor! By doing this, it will become like a battery that you keep charged for when you need it. That’s because by adding lots of different positive states, they actually stack on top of each other, and become combined into one powerful resource.

By setting up a stack of powerful resources in your anchor of choice, you’ll have an amazing go-to state for whenever you want to be at your best. Perhaps you have to make a speech at a wedding, or play a difficult hole in a game of golf.

Fire your anchor, and then take a moment to breathe and let it activate fully.

And most importantly, you can use your powerful anchor to overwhelm a bad anchor when you need to. Simply notice when you’re in that nasty state and fire your positive anchor. You’ll get better at this as you practice it, but even your initial efforts will reduce the intensity of a bad state.

And once you use your anchor to neutralize a bad state, remember to top it up again as soon as you’re able, by layering on some good positive states.

A highly charged positive anchor is one of the best gifts you can give yourself.

For more awesome NLP tricks like this, check out our NLP Essentials course.