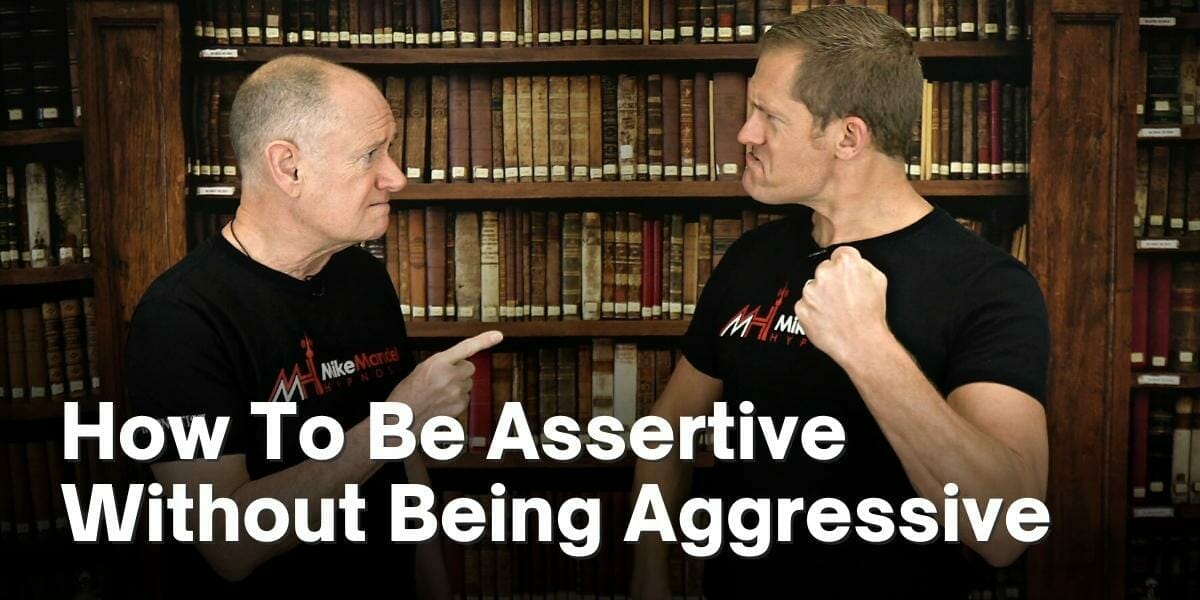 Mike Mandel Hypnosis focuses on teaching hypnosis and personal development. Part of the personal development process involves interpersonal communication and being able to handle conflicts and situations with other people in the best way possible. In this blog post, we’ll discuss assertiveness, aggressiveness, the difference between them and when each is appropriate.

They’re Not The Same

We’ve already mentioned how assertiveness and aggressiveness are two different things, but even so, we’ll further emphasize this point because many people still have a tendency to confuse them for one another.

Aggression is exclusively needed in physically and morally threatening situations. If you or anybody else is in imminent danger of being hurt or humiliated, aggression is called for, even if only verbally, in order to turn the situation around.

That means if someone is being bullied, threatened or already getting hurt by somebody else, you should turn on your aggressive mode to defend the aggrieved party, whether that be you or somebody else, provided you possess the means to do so.

We’re not suggesting you thoughtlessly react to these situations with random acts of violence. Uncalculated aggression could further escalate tensions, leading to even worse outcomes. We’re instead suggesting you mustn’t hold back if you’re in the right and have a clear picture of what you’re about to do.

Self defense is legitimate, deliberate omission is not.

As you can see, aggressive behavior is all but situational and only appropriate under very specific circumstances. Now let’s talk about the kind of attitude you’ll need for most of the time throughout your life.

How To Be Assertive

Assertion doesn’t threaten or attempt to dominate the other person. It can rather be defined as a kind of inner confidence. It’s the kind of attitude that will make sure you’re treated with due respect in a situation. When you’re assertive, you don’t cave in when you’re in the right and have a reason for saying what you’re saying.

One of the main ways assertiveness differs from aggressiveness is in the way assertive people will let the other person speak. You see, when people get aggressive, they become stupider as well. Aggressive people don’t listen. Instead, they just want to establish themselves as the dominant party in a discussion.

So, to be assertive, you won’t be talking over anyone like an aggressive person would. You’ll instead give them time to make their point while you listen with a confident posture and firm eye contact.

Avoid violence-inducing body language like making fists and staring at a person’s left eye. These gestures are considered aggressive even when done unconsciously.

Don’t get into their personal space either. Respect the distance the other person has set between you two. And if they invade your personal space, don’t back away. If you’re feeling intimidated at this point, resist the temptation of taking a step back and breaking eye contact. That sends a sign of submission, which is the opposite of assertiveness.

Stand your ground. Plant your feet firmly on the ground and stand up straight. Make sure your eyes remain locked onto theirs and speak in a strong and confident tone of voice. It’s important that you do NOT raise your vocal tone. By attempting to speak louder to overcome the other person’s speech, that will sub-communicate emotional distress at best; and at worse, aggressiveness.

Assertive people do not raise their voice. They have control over their emotions and are confident enough so they know they’ll be listened to. They also have a tendency to drop their intonation at the end of a sentence, as when giving an order or command. Observe how your vocal pitch goes down when you say a phrase that is meant to be an order, however polite it may be.

“Son, I forgot my car key. Please go upstairs and get it for me”.

Replicating this tonality variation in other sentences is a sign of confidence, power and assertiveness; all without having to raise your voice. Practice speaking like this, especially in confrontational situations. You’ll reap major rewards.

Assertiveness requires the capability to stay calm in stressful situations and establish a presence of personal power at the same time. Not only your words, but every aspect of your nonverbal communication as well, must be congruent.

To achieve this congruence more easily, we designed the Mandel Triangle. The Mandel Triangle is a concept model that paints a very clear picture of how to get all your body language signals right when a situation calls for a certain kind of attitude, especially assertiveness and confidence.

Another beginner trick you can use to effectively assert yourself without coming across as arrogant or aggressive is the Agree and Repeat technique. With this simple strategy, you can validate what the other person is saying while affirming your point at the same time. It’s very much worth picking it up.