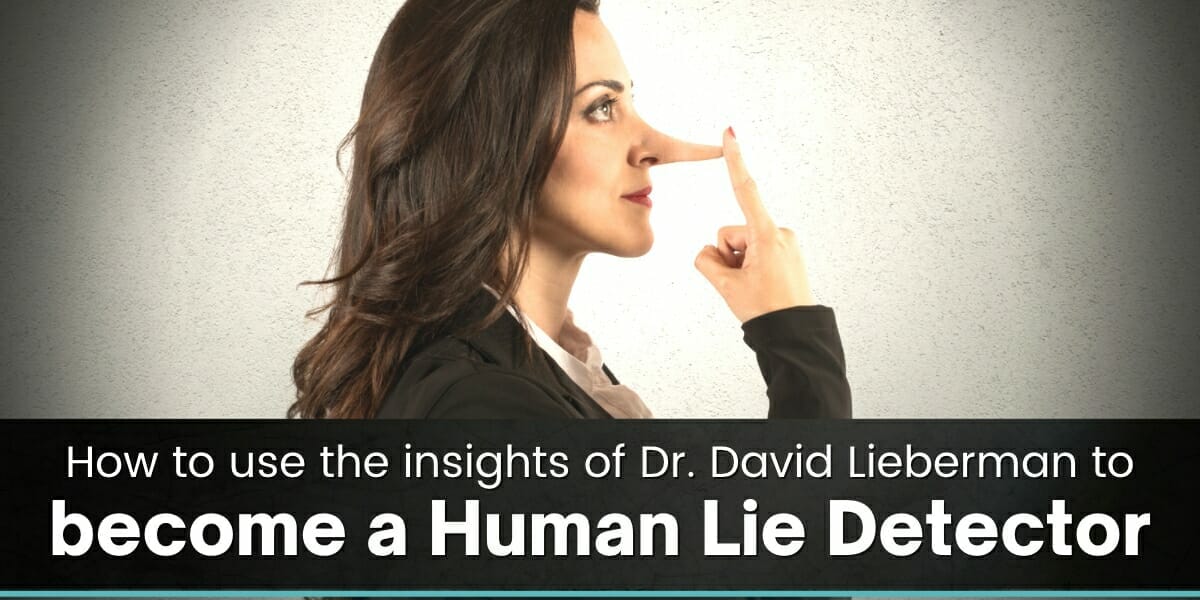 Mike Mandel and Chris Thompson from Mike Mandel Hypnosis Academy dive deep into Dr. David Lieberman’s book Never Be Lied to Again to help us understand the top ways to identify the truth or the uncomfortable deception of a lie.

The truth is, that lying takes a conscious effort whereas telling the truth operates naturally at an unconscious level.

As you read through this article, you can notice this overall pattern underpinning the examples where lying creates a visible discomfort in the body that reveals the inconsistencies of the less-skilled conscious mind.

I know it might feel somewhat uncomfortable to read “less skilled conscious mind” but imagine if it was your conscious job to keep your heart beating in perfect rhythm 24 hours a day.  I know I wouldn’t want to put that to the test!

Want To Spot a Liar? Look in the Mirror

You may not think of yourself as a liar, but I bet you can think of a lie you recently told. When reduced to our actions, we’re all liars at the end of the day. It’s still important, however, to protect ourselves from the potentially harmful lies.

A boyfriend’s infidelity, for example, might secure him the label of “liar” within his partner’s social circle – but it ends there, too. His latest match on Tinder doesn’t see a liar in his profile picture, just a single guy holding a fish.

In an era of misinformation, it’s time we shift from identifying liars to identifying the lies, themselves.

The first mistake we make is assuming all lies are conscious, meaning a person lied on purpose and thought about the lie in advance of telling it. People debate whether the omission of truth is a lie, for example, but even that restricts lying to the criterion of conscious choice. The truth is, we lie by accident all the time.

Consider a caring father. His youngest has been avoiding a chore – let’s say taking out the trash – and he’s given the child a warning. “If that trash is still here by dinnertime, you’ll lose screen time for the rest of the night,” he says.

Dinner rolls around and the trash is still in the kitchen, piled so high it can’t be tied up anymore. His child’s apologetic sobs break his heart and he decides not to enforce the no-screen-time rule, citing some other good deed the kid did that day.

In this case, the inconsistency between the father’s intended consequence and his subsequent reversal is, in and of itself, a lie. In fact, the dishonest nature of the act is evident in the future behavior of the child, who will stop trusting his parent when similar warnings are issued in the future.

People pleasers engage in this accidental form of lying more than anyone. Uncomfortable with the thought of displeasing their peers, they will make promises they simply can’t follow through on, eventually teaching their friends and family they are untrustworthy. Like all things, lying has just as much to do with impact as it does intention.

Like it or not, we’re all liars. But why do we lie? As it turns out, lies are the instantly gratifying solutions to being confronted by truths that make us uncomfortable.

Imagine one of your best friends really wants you to watch their most recent YouTube video.  When they sent it, you opened it and only paid attention to the first 3 minutes before walking into a different room.  They sent it to you yesterday, and now they just called eager for your opinion.

How would you respond?

You could lie and say, “I loved it! Especially that part in the beginning where you talked about your pet tortoise.”  This would be more comfortable for both you and the friend, but what if they asked about the part you didn’t watch? How deep of a hole will you dig to avoid the truth?

Or, you could tell the truth and say, “You know what, I clicked on it right when you sent it to me.  I watched the first three minutes and then got distracted by something in the other room.  I don’t even remember what pulled me away from it but I plan on watching the rest right after we finish messaging.  Is there anything specific you would like me to look for or give you feedback on?”

Which one would you rather hear if you were the friend who was asking?  Which version sits wrong with you?  Which are you more likely to use in the future?

Have you ever decided you had to lie about something, so you make up a partial truth that saves you from shame and disgrace?  Then you tell yourself this partial truth SO many times that you start to recall your edited version as the pure truth?

Did you know, every time we access a memory it is altered? Altering a memory is similar to mentally rehearsing something you plan on being successful with in the future, except its purpose is dramatically different.

This can actually rewrite the original experience at an unconscious level, ultimately making the lies of denial seem entirely natural and very close to an unguarded truth.

Telling a Lie Is Not Enjoyable

Lying is uncomfortable.  Most people you come across in life do not like to lie and maybe we can shift to hating the lie instead of the liar?  Odds are, they feel like there is some reason they need to lie to meet one of the basic human needs. Looking at it that way may help you to shift into a seat of compassion and an opportunity for the “liar” to learn a new skill and access healing.

If you read the list below with the mindset that telling lies is extremely painful, it can make a lot of sense why a person lying might want to “head for the door”, as Mike says.

They want to escape the discomfort.  They escape with their eyes, they build in safety and distance barriers.  They change the topic or entirely avoid the interaction in the first place.  They may actually walk to the door and not realize why they are drawn to do so.

Here’s How To Spot the Lie

Here’s How To Spot the Truth

The truth is we are all liars!  Every time you say you will do something and don’t get to it, you’re lying.  Maybe that is why teachers and parents say, “do as I say, not as I do.”  Telling the truth can be hard and often, it guarantees discomfort for at least one person.

So why be truthful?  It fosters trust which links right back into our most basic human need of safety and security.  When things are predictable we accept them as safe.  So that friend you have who will tell you the truth no matter what, there is comfort in knowing you aren’t being lied to.

It is also important to note that we encourage you to think of each trait as evidence that can support or refute a possible lie.  The more evidence that stacks up on one side, the more likely you have found your answer.

We would like to thank Dr. David Lieberman for sharing his research and insight with us and with the world.  Just like Maslow was one of the first psychiatrists to shift from looking at what was wrong with people to identify what each person needs to live a fulfilling life, we would like to encourage you to use this information to notice truths and use this superpower to water the good seeds in yourself and in others.

We are happy to say that we genuinely care about our students at The Mike Mandel Hypnosis Academy and that is the TRUTH!  Ask any of our students and they will confirm it for you.  Did you know you can get a FREE TRIAL to take your time exploring all that our academy has to offer?

We hope you check it out and I hope you have a wonderful day!

#1) Good news, a liar can’t change the truth (if you called a tail a leg example):
https://youtube.com/clip/UgkxcRvqXxowaAYRUVuz2BVab_DnvOXkyJGX

#7) Liars reveal themselves with the first expression:
https://youtube.com/clip/Ugkxl0bWX0TYAbZlFwFfF0J-9UlzaCRzZCeq

#8) Words and gestures are out of sync:
https://youtube.com/clip/UgkxWnnpM7I2djjZ_WAB2KXZ_X5sPWK8ZGd3

#9) Liar will smile without their activating other muscles in the face:
https://youtube.com/clip/UgkxH3Ij9gBbR5zGj-xmP6mvr-mz1Kbsi1ah

#13) Liars head for the door:
https://youtube.com/clip/UgkxIxpY6cEC1uG_5syHbFdrL9p2A3XfIFcq