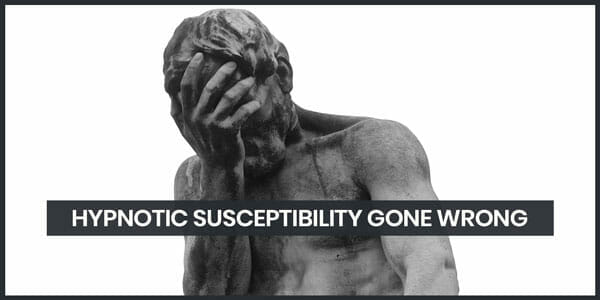 A few weeks ago, after I had put my kids to bed, I got an email from Mike Mandel ahead of our scheduled time to record a Brain Software podcast. His email, as usual, was short. It simply said “Read this. We’ll talk about it on the podcast”. Below that was a link to an article about hypnosis.  I clicked.

When I saw the headline I immediately knew what it was about and why he’d sent it to me.

Here is the blog post in question, which refers to a study from the Stanford School of Medicine website.

Let’s dig deeper into this study, because it’s a fascinating case of science gone wrong. Here’s a quote I pulled from the above-linked article:

“The study, published in the October issue of Archives of General Psychiatry, uses data from functional and structural magnetic resonance imaging to identify how the areas of the brain associated with executive control and attention tend to have less activity in people who cannot be put into a hypnotic trance.”

According to this article, the study’s primary author (Dr. Spiegel) estimates that 25% of his patients can’t be hypnotized, The article quotes Dr. Spiegel as saying, “There’s got to be something going on in the brain.”  Of course something is going on with the brain, but we need to back up for a second.

Any good scientist, or at least any good student of the Meta Model, would now be asking this question:

Exactly HOW have subjects been tested to deem them hypnotizable or non-hypnotizable?  What are the criteria for determining these categories?

This question, to me, seems far more important than taking MRI images of the brain. What if, perhaps, the way people are being characterized as good or bad hypnotic subjects is so poor that it leads well-meaning doctors down the wrong path? Wouldn’t it be more useful to assume that everyone is highly hypnotizable? After all, according to Human Givens theory, hypnosis is closely related to the REM state of sleep, which everybody experiences naturally.

And this leads us to the whole concept of hypnotizability scales.

Since we’re talking about a Stanford School of Medicine, it seems fitting that we should look at the Stanford Hypnotic Susceptibility Scale. This test consists of 3 forms (A, B and C), which supposedly get increasingly difficult. Forget that this so-called “difficulty” might be based on outdated techniques and inept, or poorly trained hypnotists.

For years I’ve heard Mike Mandel talk about why hypnotizability scales are useless, which he describes as “a ludicrous attempt to digitize and hierarchize that which is essentially analog phenomena”. They force subjects into someone else’s model of what hypnosis is, and draw conclusions based on one particular method of trance induction. I can only imagine Milton H. Erickson giving himself face-palms from the grave here.

I looked at Form C in depth. There is a pre-talk given to test subjects, as described in the first few pages of the PDF I’ve linked to above. A good Ericksonian hypnotist uses the pre-talk as a way to not only build rapport, but to covertly begin the trance.

Instead, the Stanford test plants seeds of doubt. The pre-talk script is littered with horrible statements such as:

“Among other things, we’re interested in individual differences in hypnotic response, and how they might relate to other aspects of the personality.”

Do you really think it’s useful to tell patients that hypnotic response might be linked to personality?

“Moreover, we find it sometimes takes people a little time to settle into being hypnotized.”

Why would you want to seed the suggestion that hypnosis might take a longer time for some than others?

Good grief! Can it get any worse? Now we’re going to acknowledge a certain level of boredom in doing hypnosis? A hypnotist has the power of prestige working for him. Why on earth would you use that power to plant the suggestion of boredom?

“The idea is just to pay attention to what is going on, and try to have the experiences that are suggested to you. Don’t push something that isn’t working, but don’t hold back on something that seems to take.”

I see. Yes, it can get worse. Now we’re supposed to pre-frame subjects into thinking they need to pay close attention to what’s happening as if it’s hard work.

But it gets worse still!

We’re going to tell them to “try” to have the experiences suggested? Asking someone to “try” (especially when the word is emphasized) is a covert way to setup failure. I learned this from Mike Mandel years ago. Mike routinely uses “try” when he wants a client or subject to fail at a given task, such as “Try to remember that bad feeling…”

Now, according to the Stanford test, the hypnotist moves into the hypnotic induction. Of course this induction is a script, being read to the subject. Recognize that a script, by definition, is fixed. It doesn’t change, and doesn’t permit the hypnotist to feedback any of his calibration into what he’s saying or doing. It doesn’t allow for Ericksonian principles such as incorporation or utilization. Nor does this recipe format take into account individual response. It becomes a one-size-fits-all induction.

The induction itself, is based on eye fixation along with direct suggestion of eyelid fatigue, a heavy, relaxed feeling in the body, and a desire to feel drowsy and sleepy. For many subjects, this method will work fine. Obviously it works enough of the time to keep from being scrapped.

But the problem lies in believing that a subject must be hypnotized in this manner in order to be deemed hypnotizable. That belief is, to use the medical term, nuts.

Those of you who have been trained in Ericksonian methods understand that many people respond much better to inductions that focus the attention to internal or external kinesthetics. Mike Mandel’s single finger catalepsy induction is a perfect example of this. The kinesthetic system becomes a key that unlocks the trance state.

Good hypnotists also understand that the hypnotist and the subject are working together with a feedback loop between them. The outdated cause and effect model, in which the hypnotist “hypnotizes” the person, do not take into account the requisite active participation of the subject in the creation and maintenance of his own trance. Scripts, according to Mike Mandel, are “the training-wheels and junk food of hypnosis”.

Beyond the problems of using a fixed script, we have to also consider the other variables. Does the subject like the hypnotist? Is there rapport between them? What sort of mood is the subject in at the time? What about the hypnotist’s mood?  Does the hypnotist, at the very least, pace the breathing rate of the subject? Does he or she have an irritating voice? Does the hypnotist possess adequate calibration skills to ascertain the client’s response?

My father in law is a retired mechanic. He worked on engines for decades. Imagine if he had to follow step by step instructions to fix an engine rather than relying in his own past experience and knowledge as to the best way to unstick a rusted bolt, or dislodge a jammed belt. He would throw away the manual and say, “Each situation is unique”.  Manuals are guidelines. And hypnotic inductions should be principle-based, and flexible, responding to the subject, moment by moment. Anything less than this leads to difficulties. It’s like a driving instructor telling a student to always drive in the right hand lane because it’s safer. It is safer than the passing lane, of course. Unless there happen to be parked cars…

If I built a bridge out of chalk and analyzed why it kept breaking, the results of my research would be useless. I should realize that, instead of chalk, steel and concrete would be more effective.

Whatever results came out of Spiegel’s MRI study, I highly suspect they are useless. They are a fruitless exercise in analyzing the aftermath of a horribly wrong set of presuppositions on hypnotizability.