Free Hypnosis Scripts And Why You Shouldn’t Use Them 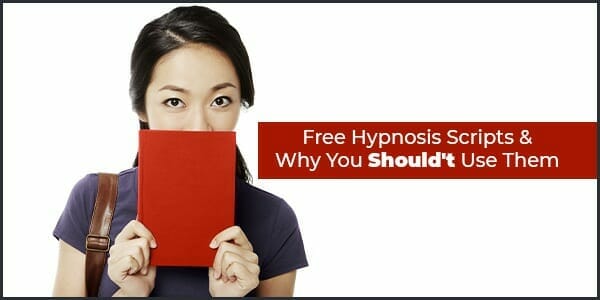 In fact, hypnosis scripts are mostly like junk food. They stunt your growth as a hypnotist. Worst of all, they could actually end up making you a worse hypnotist!

What If I Told You That You Can Get Better Results Without A Hypnosis Script?

That's right, a hypnosis script isn't required at all to do great hypnosis work. The best hypnotists that I've met don't use scripts at all. So why bother?

You don't need a script to do hypnosis. You need practice!

There are two key skills a hypnotist must develop to do hypnosis effectively. They are rapport building and calibration. With those two keys, a hypnotist can make any and every induction work. Without rapport and calibration, nothing works.

Allow me to explain...

You see, hypnosis is really just a form of very effective communication. For it to really work, two people must be in rapport with each other. And, the hypnotist must calibrate the reactions of the subject they are working with.

I've found that my best hypnotic subjects are people I have excellent rapport with. This is the same with all forms of communication including sales, marketing, and public speaking. It always starts with rapport.

For example, it wasn't long ago that I had a client come to me asking for help. It was something that I had plenty of experience with and we have a great relationship. There was such fantastic rapport that I don't really have to "sell" my services. I explained how I could help and named a reasonable price.

Rapport made that sale easy. In fact, I wasn't even looking to make a sale. My client practically begged me to work with them. And since we are in such good rapport, I was happy to help!

Hypnosis starts with rapport. And it continues with calibration.

Calibration is essential to effective hypnosis work. The problem with using hypnosis scripts is that you are too busy reading the script to calibrate the subject. What's funny is it often doesn't take much work to invite someone into trance if you are calibrating them.

I remember one time when I was practicing hypnosis with a friend. I calibrated that he was ready to go into trance. So I just told him to close his eyes and said "sleep now". He had done all the work himself and was ready to be in a trance. Because I calibrated that was the case, I didn't have to work very hard.

That is what I mean when I say that hypnosis scripts are junk food. If I was busy looking at a script, I wouldn't see what I was missing. There are so many cases where a small nudge or encouragement is all it takes for someone to go deeper into trance.

This free video tutorial shows you exactly how to perform Rapid and Instant inductions. This is way more powerful than any script you find on the internet!

So Are All Hypnosis Scripts Bad?

Hypnosis scripts don't have to be so terrible and useless. There is a small point where a hypnosis script can be useful. At times, it is useful to study a script to get ideas and structures for inductions or hypnosis change work.

Mike Mandel and Chris Thompson always say that reading a hypnosis script at someone is useless.  But studying a hypnosis transcript can be quite helpful!

An even better approach is to study hypnosis books. Many have excellent ways of treatment for particular problems, and they often include great example transcripts of sessions.

Learning specific hypnotic inductions and techniques via scripts can be somewhat useful. But, only to a point. Consider any scripts you find akin to a reading a book. They can be read or practiced, but hypnosis scripts aren't spells or incantations that you recite at people.

When working with clients, using scripts is a terrible idea. Instead, take whatever skills you have and apply them with the person in front of you. No script, just focus on the person. You will get a much better result that way.

Something Better Than Hypnosis Scripts

If you want to learn hypnosis for yourself, ignore the scripts. Instead, focus your energy on the principles of hypnosis. Develop your skills of rapport and calibration. Learn a few power inductions.

Practice your hypnosis skills as much as you can!

First learn learn a few inductions. Then get good at building rapport and calibration. You can become a very effective hypnotist even with a small set of skills. Once you get enough practice, there is no limit to what you can achieve with hypnosis.

Just stay away from free hypnosis scripts. They are a waste of your time.

This free video tutorial shows you exactly how to perform Rapid and Instant inductions. This is way more powerful than any script you find on the internet!