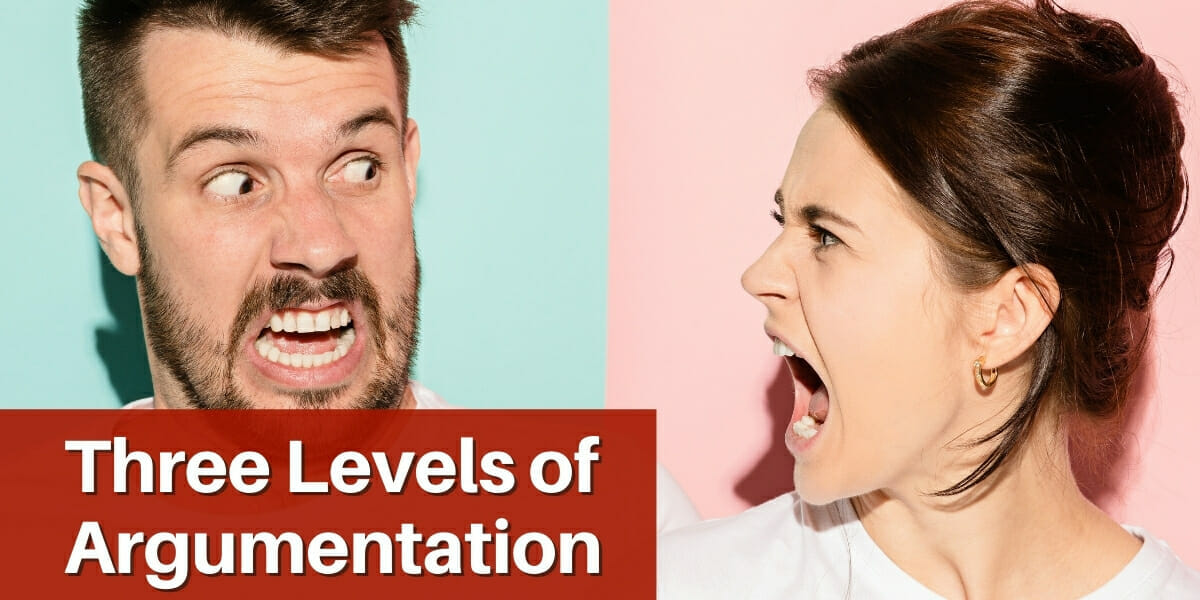 Argumentation? I hate people who argue! It’s so negative and stressful.

We agree with you. At least if you’re referring to people screaming and yelling and making other people uncomfortable. But that’s not what we’re talking about here.

When we say argumentation we mean in the classic sense of the word, which is the art of reasoning to form conclusions and discover truth.

In other words, two or more people engage in discussion and debate about a specific topic. The idea is, with this back and forth dialog, eventually sane heads will prevail, and the conclusion will be understood by all. Then if useful, will be acted upon or applied in some sensible way.

But the real world gets in the way, and even the most logical discussion can quickly go off the rails, generating more heat than light.

The reason for this is a little known, but very useful concept. By understanding what’s going on, we can be far more effective in both persuasion and our listening and thinking skills.

There are actually three levels of argumentation, and the most important level is the first one…

Argumentation Level One is the most powerful level of all. For this reason, it’s where we should opt to spend most of our time - at least in theory.

Level One is all about data or information.

When we are engaging in a Level One discussion, we stick to relevant facts. We honour our adversary by being good listeners, and carefully weigh what is being said; even if it radically disagrees with our position.

To be at Level One is to value the other person and their right to be heard. This prevents us from talking over them or “shutting down” when they speak.

Level One makes few dogmatic declarations, preferring to ask a lot of questions. The skillful use of questions will validate the other person by letting them feel that they are heard. It will also unpack the key issues at stake in the discussion, moving toward some type of resolution.

That’s because it’s all about data.

A person at Level One isn’t adverse to saying “I don’t know…” That’s because the discussion isn’t about ego. It’s about discovering what’s at least applicable.

Unfortunately, human beings being less than perfect, we frequently stray from Level One and go up a level.

That’s because they have the power to cloud our thinking. Human Givens theory states that whenever we experience any strong emotion, we actually become temporarily stupider.

Emotions like extreme happiness, grief, rage, etc., can all cloud our thinking processes.

“Yes Dad…I know my new boyfriend spent ten years in prison…but he brought me some beautiful strawberries from the farmers’ market!”

Yes, it's a ridiculous example. But it makes the point that we become irrational when we’re emotional.

As our discussion goes on, aspects may emerge that we are very passionate about. Anything, from politics to religion, may begin to engage strong emotions. This especially happens when we believe something is “self evident” but our opponent doesn’t agree with us.

When we hit Level Two, our bodies begin to trickle powerful neuro-transmitters into our bloodstreams. Adrenaline is perfect example.

Adrenaline is a hormone produced by our endocrine system that’s more powerful than amphetamines. When the adrenal glands on top of our kidneys drip adrenaline into our blood we can feel it right away in what’s known as an “adrenaline rush”.

This is actually a really good thing, if we’re about to fight a saber tooth tiger, or carry someone out of a burning building. That’s because adrenaline dramatically increases our strength and reduces pain.

But when we’re beginning to feel that adrenaline release, we begin to get a bit louder, as we feel more powerful and aggressive.

Our emotions will rise, and we begin to get stupider.

At this point, we’ll also begin the rapid rise of black and white thinking. We will see our opponent’s discussion points as either completely right, or completely wrong, missing all the shades of gray in between.

At this point, it will begin to become difficult to process what the other person’s saying, as we start to tune them out. It’s as though we literally cannot hear them.

And why wouldn’t we tune out a person who is sounding so illogical and ridiculous?

As the argument intensifies, unless the opponent has consummate communication skills, he or she will also begin the adrenaline trickle, and the climb to craziness continues!

At this point, you need to recognize what’s happening and take some slow deep breaths. Taking a break from the conversation and going for a walk or doing some other exercise will help the adrenaline burn out of your bloodstream.

This is vitally important, if you wish to resume the argument in a sane manner.

You need to shut down that adrenaline release as soon as you notice your voice is getting loud, and you’re feeling the rise of powerful emotions. Otherwise, you’re both heading for a metaphorical train wreck.

Level Three - Gasoline on the Fire

We’ve all been at Level Three, and probably too many times!

We arrive at Level Three when the adrenaline trickle becomes a flood, throwing gasoline on the emotional fires. At this point, the discussion is pointless.

At this level, we may shout or swear at our opponent, our face red and our hands shaking.

We’ll both talk over each other, and stop listening completely, as we mentally plan our next devastating comment. We may feel an overpowering need to win.

Statements will be misheard and translated into insults. The volume goes up and up and up, and nothing of value is accomplished.

At this point, many men will disengage, stop talking, and simply leave the room. According to British researchers Griffin and Tyrrell, this is done intuitively, because men more than women, are in danger of heart attack or stroke.

Certainly not the place you want to be.

If you hit Level Three it’s vitally important to slow your breathing and take a complete break from the argument. It may well save your life.

In any discussion, it is crucial to remain at Level One as much as possible. By doing this, logic will prevail and sanity will rule.

If you start to notice you’re going to Level Two because you’re becoming tense, loud, or emotional, it’s time to take a break to allow the adrenaline to leave your system. A good walk can help you return to normal.

It’s also a good idea to gently suggest a break or change of topic if you notice your opponent is hitting Level Two.

When a flash flood of adrenaline drives you into Level Three, it’s time to get out of Dodge and exit the argument.

Losing the argument is always preferable to blowing a gasket and winding up in the ER.

If this is the kind of personal development content that resonates with you, make sure you check out our Personal Growth Membership.

The Personal Growth Membership is a low-cost bundle of several courses and self hynosis audio tracks for personal development and self improvement. It's THE product you need to start improving your quality of life right now.