Podcast #71: Gus Grissom is Alive and Well in Tweed Ontario! 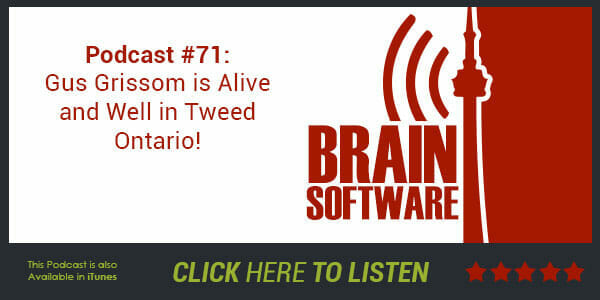 Welcome to Episode 71 of Brain Software with Mike Mandel and Chris Thompson! From Toronto Canada, to the trenches of France and the Orient Express, this is the only podcast you’ll ever need. On the heels of the sold-out May Architecture of Hypnosis training in Toronto, Mike and Chris get ready to teach a weekend of MINDSCAPING, and then yet another sold-out hypnosis course. The hypnotic infection is officially incurable.

Gus Grissom Update: Gus Grissom was spotted sipping a cup of coffee in Tweed, Ontario at Kelly’s Restaurant. He denied being Gus Grissom, and fled, when confronted by Washona Teale, who only wanted an autograph.

Remember: Check out the MINDSCAPING training at Hypnothoughts Live in Las Vegas, in August 2016! Bonus: When you pick up a digital copy of MINDSCAPING using that link you can attend our one day class for free AND get a significant discount on your conference ticket.