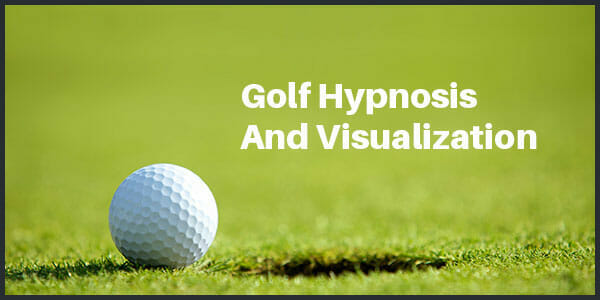 Golf hypnosis is a powerful tool for golfers at any level. It is something under-utilized by professional and amateur golfers, despite its incredible effectiveness.

I am a golfer. I'm also a hypnotist. And being both I can tell you that it's mind blowing to me how much money and time golfers waste on equipment and green fees. Near as I can tell, the average golfer is going to light at least $2,500 on fire in the hope of improving their game by no more than a few strokes.

When I was young, my parents bought me a youth membership to a local golf course. It was cheap and a great opportunity for me to do something more useful with my time than playing video games. So, they would drop me off at the golf course in the summertime and I'd play golf. It was great!

I enjoyed those days of playing golf for hours every morning. Those are some of my fondest memories.

But, my family wasn't exactly rich. My equipment was cheap, old, outdated gear that was way out of line with modern standards (even in the 90's). My first set of clubs had wood head drivers and hand me down irons. Later I got a set of basic metal youth clubs at Walmart that was on sale for $50 or something.

Being young, I watched older men play the game with their $500 Great Big Bertha drivers. They could hit these amazing drives off the tee. At the time, I thought anyone who could hit over 200 yard drives must be a professional golfer.

Then I would read through Golf Magazine and study the ads. What clubs were the pros using? What driver is best? What kind of putter should I use? Do I need a flop wedge? What is a flop wedge?

I was young and I didn't know any better.

I spent too much time thinking about golf clubs. I was so obsessed with equipment that at times I spent more time thinking about getting a new golf club than I did about swinging the golf clubs that I had! I didn't understand that the mental side of the game was more important than the physical side of the game. And the physical side of golf is more important than the golf equipment you are using.

Being young is fun isn't it?

So, while I went out for golf in high school, I never made the varsity golf team. I was a mediocre golfer on a good day, and a bad golfer most other days.

If I had known better, I would have spent more time practicing my golf swing. That would have changed things a lot. But, it didn't happen.

Instead, I got better gear and missed out on the hours I had at my disposal. I could have spent time really honing my swing, learning the mental game, doing golf visualization (or even hypnosis!). Instead, I looked at golf magazines too much.

Visualize every shot going into the hole and do it more effortlessly than you ever imagined possible. Peak Performance is within your grasp...

Years later, I graduated college and got busy with work. My father and brother got into long drive golf and so we'd go hit golf balls at the driving range.

Anyway, the driving range gave me the opportunity to work on my swing and make it consistent. It turns out, consistent practice trains the physical side of golf well. So, finally I got the basic foundation in place to play competent golf on a physical level.

I've gone past gear, and past the physical skills into the mental game. But, my mental golf game was weak and inconsistent.

Your Brain On Golf

Golf is a mental game. It looks like a physical game, but if you ever watch high level golf on TV it quickly turns mental.

Here is what I mean. Have you ever watched golfers like Tiger Woods play amazing one day and the next day everything just falls apart?

What happened? Did he forget how to swing the golf club? Did the tens of thousands of hours of training go away? How can a professional athlete forget everything they practiced in a tournament?

That is the mental side of golf. And I've come to learn, once I got to a certain level of skill it isn't the golf clubs that make you better. It's not the physical techniques or more practice either. Your unconscious mind makes the difference.

It impacts everyone from total beginners to the highest level PGA golfers. That includes me and that includes you.

That is what I call "Mental Golf". It's the side of golf people work the least, and it matters the most. There are loads of techniques that I've found to cut anywhere from 5 to 10 strokes from my golf game.

I'm no expert golfer yet, but I have found two critical keys to improving my Mental Golf. They are related tools - visualization and hypnosis.

Visualization is important in the world of sports performance. So, it's not a new idea and I'm not claiming to invent anything here. And when it comes to golf, the way you use it is simple.

At its core, golf visualization is about picturing yourself making the shot. But it goes much, much deeper than that.

You see, in life you will tend to get more of what you focus your mind on. So, when you focus on making the shot you are more likely to make the shot. When you focus on all the little problems or things you have to get "just right", you miss the shot.

This is why you see great golfers blow it on the back nine of a major championship tournament. They are so focused on the pressure of failure that stop picturing making the shot. The worst thing you can be thinking of on a golf course is "Don't screw this up" because then you start imagining and visualizing how you might screw it up.

When it comes to the world of golf, hypnosis is not exactly popular. In fact, you might get some funny looks if you tell people you use hypnosis to improve your golf game. However, when you blast a 300 yard drive down the center of the fairway, they might start asking you how you did that.

Hypnosis unlocks the hidden powers of your mind. It allows you to do incredible things that sound impossible. It's the power of neuroscience in action.

Hypnosis and trance is a very normal part of your everyday life. If you've ever watched a two hour movie that felt like just a few minutes, you've enjoyed a movie trance. If you've ever drove home and that 30 minute commute felt like an instant, that is a trance too.

So trance is all around us and hypnosis is a way to access trance to be useful and beneficial to your specific needs. For golf, that means using the power of your unconscious mind to speed up the skill building process and build the strongest mental game possible.

Did you know that there was once a soldier caught as a prisoner of war in Vietnam? He spent years in prison and all he wanted to do was play golf. So he played golf in his mind. Round after round playing golf kept him from going crazy in solitary confinement. It kept his mind sharp, it gave him a reason to live.

Years went by and after the war he was rescued. All he wanted to do was play a round of golf. So, despite the fact that it had been years and years since he had even ben let out of his concrete jail cell, and he never touched a golf club, he played better golf than he ever had before.

What the man had done was a form of self-hypnosis to practice his golf game. It wasn't just visualization. He was fully immersing himself in the imagined experience of golf such that it became real to him.

Studies of hypnosis, neuroscience, and visualization have shown that the brain doesn't distinguish between something that really happens and something vividly imagined. That is why people can wake up from nightmares in a cold sweat as if the apparitions in their mind were real. In fact, they ARE real in our brain. The chemicals and hormones and reactions are very much the same.

The Realistic Impact Of Mental Golf

All combined, using tools such as visualization and hypnosis it is possible to improve by 1 or 2 strokes per hole. That comes from practical golf strategies consistently executed.

Mental Golf gets you consistent execution. That can be a far bigger impact than a new golf club or technique can bring because you can use these tools on every shot.

The best part is, it doesn't matter how old you are, how strong you are, or how smart you are. Every human being has the ability to visualize their success on the golf course and then make it happen.

None of this will make you into Tiger Woods or Phil Mickelson overnight. What it will do is make you a better version of you playing golf. It makes the golf more enjoyable and fun. For me I think, "You play golf to have fun, do you not?"

I know I do. Now more than ever before.

Visualize every shot going into the hole and do it more effortlessly than you ever imagined possible. Peak Performance is within your grasp...