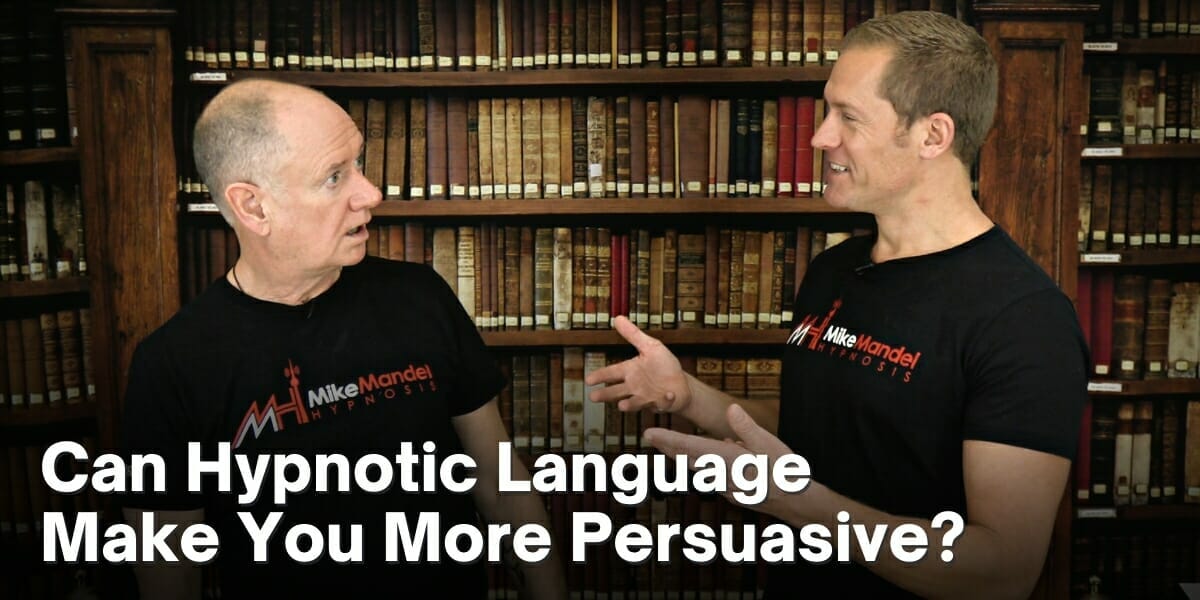 Have you ever been sitting in the audience or in a crowd, listening to somebody presenting, and for whatever reason every word they say just draws you in more and more? Can you remember a moment in your life where you read an advertisement that encouraged you to go out and immediately purchase whatever product they were offering?

You aren’t alone if you’ve said yes to any of these questions. As it turns out, the human mind is able to be persuaded without our conscious knowledge of it happening. In this blog post, you are going to discover just how certain language can be hypnotic and down-right persuasive.

If you enjoy the kind of high-quality content we create for this blog, you'll most definitely love our Youtube channel. Check it out down below. Thanks for SUBSCRIBING and leave a comment!

“Suit the action to the word, the word to the action.”

By now you’ve probably had an opportunity to check out mikemandelhypnosis.com and realized, we’re hypnotists! Mike has been practicing hypnosis for over 50+ years, Chris has been practicing for almost 30 years, and the rest of the MMHA team have various years of experience ranging from entertainment to formal hypnosis.

So with that said, we know a thing or two about hypnotic language!

A common misconception people have about hypnosis and the language we use is that we will speak in some weird tongues or attempt to use our words to control the minds of innocent by-standers.

That couldn’t be farther from the truth because honestly, hypnosis just doesn’t work that way. Sure, there are various ways that a person can use language to influence others one way or another; but when it comes down to understanding the meat and potatoes of how influence and persuasion work, there are way more variables than just language that play a huge role in the decisions a person will make.

In other words, language is only one of many components that would go into the art of persuasion and influence. The bad news is, most people only seem to focus on this one aspect of it.

In a recent blog post, we explained how there are three common principles that, once mastered, can make anyone a fascinating presenter. We refer to principles as the three E’s. (entertainment, experience, & education).

If you haven’t had an opportunity to read that blog post, you can check it out here:
The 3 E’s: The Elements of Fascinating Presentations

With that said, we won’t be going into detail about how to influence a crowd as a presenter because we covered that in great detail in the post that was linked earlier.

However, we felt it was important for you to understand some of the principles around why hypnotic language works, rather than what specific phrases to use.

Because, if we are being honest, it matters less on what you say and matters more on how you say it. And what matters even less are the words you use, because what matters the most are the things you aren’t even saying.

Well we are about to make it really easy by introducing you to one of the most important principles in hypnosis, influence, and the art of persuasion.

In the presence of rapport, you can get anybody to do practically anything. In the absence of rapport, nothing can be accomplished. Without the feeling of trust, empathy, understanding, or connection, a person will be less open or emotionally available than somebody who feels genuine, authentic, and trustworthy.

We like building bonds! Humans are social animals! With those connections though, come the internalized ‘rules’ that allow the true bond between our fellow beings. This deep connection of trust and emotional openness is called rapport.

Rapport is the glue that holds people’s interest. It’s the magnetic pull of a captivating speaker. When it comes to hypnosis and hypnotic language, rapport is no different. It’s the bond of trust and connection that keeps trance intact.

Truth be told, if the only thing that somebody needed were a few language patterns or special words to manipulate the masses, then the human race would have a much bigger problem on their hands!

When you want to become more persuasive or influential, the first is to build a bond of trust. This is why inside The Mike Mandel Hypnosis Academy, we teach building rapport as one of the first foundational principles of hypnosis.

You can naturally build rapport a few ways, but these are some of our favorites:

Match and mirror the body language of your subject

Studies have shown that we have what are called mirror neurons in our brain. These are the components of your neurological brain-bits that help you unconsciously make specific choices. Think of the last time you had to complete a difficult challenge or practice a certain sequence with a group of other people.

You probably watched the groups who were going ahead of you to see what they did so you can either match their success, or avoid what didn’t work. Your mirror neurons were pattern matching to help you succeed. In caveman days, this helped a person naturally build rapport because there is a higher chance of survival in a group rather than by yourself.

This simply means that by subtly matching the body language of your subject, you’ll naturally gain rapport by playing on the unconscious resources of the mirror neurons.

Use your subjects own language

In the same way as using the mirror neurons, by using your subject’s own words back at them, you’ll create an immediate connection and start the process of rapport building. Everyone loves to be heard. You love it when someone understands what you are saying, don’t you?

When we feel understood, appreciated, and relatable, it feels good! It feels like we can trust the person we are talking to. When you use the language of your subject, you are telling them, “I hear you!” The only time this doesn’t work is when you assume you know what they mean and paraphrase. This has the off-chance of making your subject feel unheard, which doesn’t feel good at all.

Simply put, if your subject says, “I really feel sad and alone…” then saying, “You feel depressed because you miss people…” might damage the emotional relationship with them, especially if they feel sad and alone because of a completely different reason!

This is called Clean Language and it's one of the most valuable tools a therapist can have.

The Secret Of Pretending - It’s More Than Child's Play

One of the best ways that a person can naturally build rapport is to pretend. How, exactly? A secret of any good listener is to seem interested. Pretending the person you are speaking with is the most fascinating and important person in the room will magically unlock rapport’s metaphorical door.

Think about it. How do you feel when you are having a conversation with someone and they appear to be ignoring you. Maybe you notice they aren’t paying attention at all and are stuck on their phone. That feeling sucks, doesn’t it?

Now imagine the exact opposite, where the conversation was engaging, you felt heard, understood, and accepted. That feels awesome, right? Of course it does! By pretending the other person is the most important and fascinating person in the room, you fire your mirror neurons up unconsciously, and you naturally engage in a state of curiosity.

These two combinations of neurological wonder, bridge the gap between listening and engaging, causing a person to naturally mirror and match, both with their physical body and the language they use. Pretty cool, huh?

Milton H. Erickson is considered the grand poppa hypno-wizard of modern-day hypnotherapy. He had this way of building such strong rapport with people that you might go to shake his hand and suddenly be awakening from a hypnotic state, completely unaware of what just happened. He called this the handshake induction and it was the talking point of conversation at many gatherings whenever Milton was invited. People would warn others about shaking his hand because of his prestige and ease of getting people into hypnosis with it.

But when other people tried to mimic what Erickson was doing, they couldn’t get the same results he was getting. That’s because they firstly lacked the fundamental principle of rapport, and secondly because they didn’t understand the way Milton H. Erickson used language patterns. (By the way, we teach Milton H. Erickon’s Handshake Induction inside the Mike Mandel Hypnosis Academy!)

Erickson was the master of using language to cause people to go into hypnosis. It wasn’t until John Grinder & Richard Bandler discovered the specific patterns that were used before we started to understand a different side of hypnosis. One where a pendulum or magnet weren’t needed at all.

Mainly because, well…it works! Direct suggestion has been used for thousands of years with predictable results. It was only up until the last few hundred years where we started to discover a new way of doing hypnosis, where indirectly suggesting for change had the same effect or better, as directly suggesting did.

That changed with MIlton H. Erickson. Once Bandler & Grinder uncovered the deeper meaning behind the language patterns used and connected it with Erickon’s uncanny ability to become the most interesting and fascinating person you’ve ever met, the secret to conversation hypnosis was born.

That’s why, inside The Mike Mandel Hypnosis Academy we use a Neo-ericksonian approach. We’ll teach you how to use both direct and indirect suggestions, as well as helping you naturally build hypnotic speech patterns that will enhance your formal hypnosis sessions.

Over the years, hypnotic language patterns have become the central focus for a lot of people wanting to learn conversational hypnosis. They think if they just learn a few hypnotic words and phrases that they can get anybody to do anything.

Heck, you might have even seen an online article or advertisement claiming it’s possible.

So when you are ready to take your hypnosis training to the next level, we highly recommend you sign up for The Mike Mandel Hypnosis Academy