Hypnosis vs. Meditation – What’s The Difference? 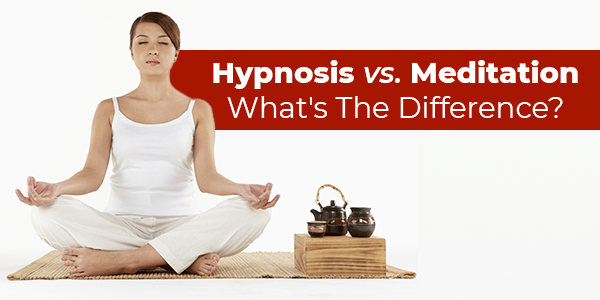 Are hypnosis vs. meditation the same thing or are they different? Are you sure?

And so this begs the question of hypnosis vs meditation. What is the difference between hypnosis and meditation? Is there a difference? Are they the same thing?

Let’s dive in, shall we?

Why Meditation Is Not Hypnosis

First of all, there are many different forms of meditation. Like martial arts, there are different schools and techniques and approaches. So, let’s define meditation first.

In the context of this discussion, I will consider meditation to be the act of sitting down, closing your eyes, controlling your breath, and clearing your mind for some period of time.

Things like background music, chanting, or repeating a specific phrase out loud or in your mind are optional depending on your specific belief and practice of meditation. Also, it can be done in a group or alone, but that makes little difference to this discussion.

Now, meditation can create a trance state. There are some forms of meditation that are absolutely hypnotic. Yet, these are what I would consider to be a light trance most of the time. More than that, the trance states aren’t intentional.

The thing that keeps meditation from being hypnosis is intent. Meditation is not focused or directed enough to create the kind of positive changes or dramatic physical or psychological effects that hypnosis does. Specifically, a meditation session isn’t going to induce catalepsy or make your mind’s Critical Faculty more permeable and open to suggestion.

Meditation still has many incredible benefits. But, they are more general and less specific. Meditation makes you feel awesome. But, it won’t cause you to stop smoking in one meditation session.

Why Hypnosis Is Not Meditation

As I said, meditation can induce a light trance state, but it is not hypnosis. The closest thing to meditation is self-hypnosis.

In self-hypnosis you are directing your unconscious mind to solve a problem or make a change. That the opposite of emptying your mind of all concerns. It is more like focusing a part of your mind that you don’t often focus.

Some meditation practices are very close to self-hypnosis. However, they lack the critical part of focusing your mind on a positive improvement. In some cases letting the mind wander aimlessly lets in negative stimulus or allows you to loop on negative thoughts.

Hypnosis puts the power of trance states to work in a much more powerful way. By directing the power of your unconscious mind incredible and rapid changes are possible. And, you still get the energetic benefits of a meditation session.

So you feel awesome and improve your life at the same time. To me, that makes hypnosis a much more powerful modality.

Hypnosis vs. Meditation – Why Not Both?

Now, what I will say about both hypnosis and meditation is that both are powerful ways to make your life awesome. And, both have their place.

Meditation has been around for thousands of years. In religious services and daily practice, prayer and meditation are staples of nearly every religious belief system. Also mystics and shamans have long used meditation in various rituals. Popular fitness and wellness practices like yoga often include meditation. Even famous neuroscientists like Sam Harris are promoting meditation now.

Millions of people benefit from meditation in its many forms and I believe that is a wonderful thing. I hope it continues to help people.

At the same time, For many people hypnosis is considered strange and bizarre. They see stage shows and people barking like chickens and they say, “Gosh, this hypnosis stuff is crazy! Are they faking it?” It turns out that some people like going on stage and being ridiculous. Stage hypnosis is a hilarious and fun way to do that in public.

But in private, thousands of people around the world are using hypnosis to change their lives in dramatic ways. They stop smoking, they improve their health, they lose weight, they get rid of stress. It’s incredible how powerful hypnosis can be to change your life today. And yet, it doesn’t have to be strange at all. It can be as simple as sitting down for a 5 minute self-hypnosis session.

Hypnosis Can Change Your Life

I find that hypnosis is a powerful tool to change your life because it is so easy and your changes can happen instantly. Seeing that happen for yourself is amazing.

With that being said, there is a place in this world for both hypnosis and meditation. They don’t need to be at odds at all.

This free video tutorial shows you exactly how to make stress totally disappear. It only takes 60 seconds to make your stress go away.