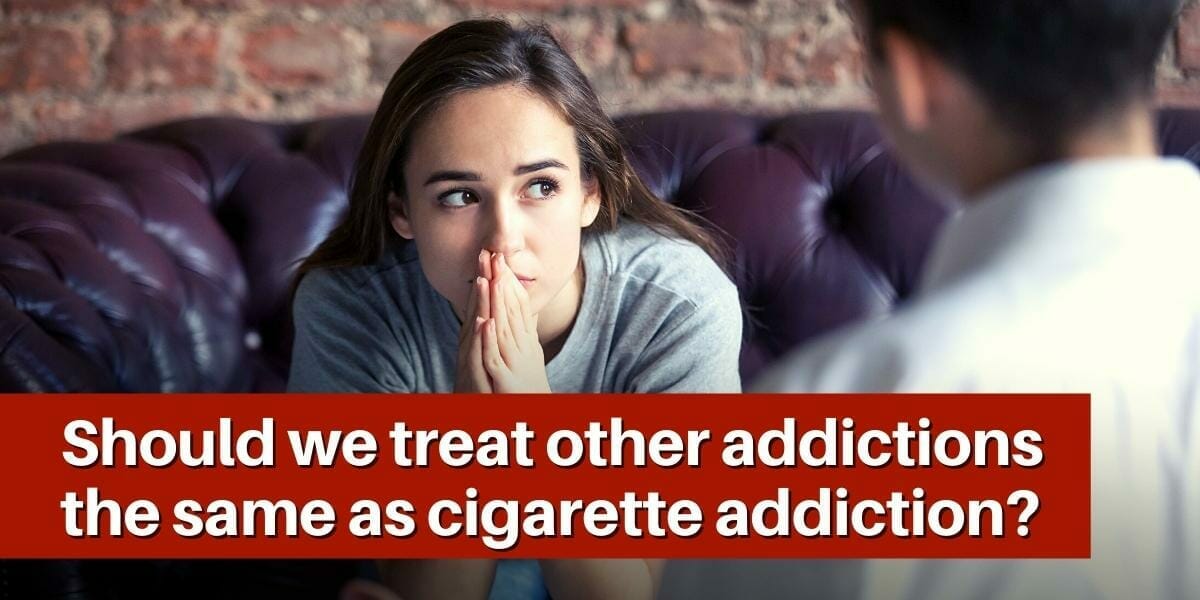 Hypnosis is known for helping people with a variety of issues and situations. Everything from overcoming difficult emotions, crushing stage-fright, or creating powerful confidence in a person are some of the ways you may go see a hypnotist or hypnotherapist.

However, did you know that one of the most widely used protocols in the hypnotic-world is for smoking cessation? That’s right! Smoking is considered one of the highest addictive activities known to man…

...at least, that’s what people have been told for decades!

In this blog post you are going to discover some of the myths behind smoking and whether or not hypnotists should treat other addictions similarly to cigarettes.

However, make sure you stay to the end of this post because we’ve got a special treat for you!

But first, let’s talk about a few myths behind smoking.

Imagine you owned a company, who’s entire goal was to get people hooked onto your product for their entire life. Your goal as the owner of this company is to come up with a way that anybody who would start consuming your product would want to keep doing it, day in - day out, until they eventually died.

Now also imagine that the product you created was intended to purposely harm your customers, making them sick and ill, and imagine your product tasted like a pigs butt, with the aftertaste of chemical and flavored additives all meant to intentionally create an addiction in our consumers.

Most of us, and by that we mean a majority of us, would be completely appalled by the thought of making a product that was intended to harm others, let alone intentionally be addictive.

The truth though is tobacco companies don’t really care about you or your health. They only care about making money and keeping people hooked.

They absolutely KNOW their product kills people. They KNOW it’s dangerous and harmful. They KNOW they put 3000+ chemicals into the cigarette, like nicotine, formaldehyde (for embalming bodies), or benzene (nail polish remover).

They also know that it isn’t addictive at all.

WHOA ... okay wait. That doesn’t really sound right at all, does it?

You’ve probably heard your entire life, from doctors, the government, or even billboard ads, just how addictive nicotine and cigarettes are.

One of the greatest myths in the tobacco industry is that nicotine and cigarettes are just as addictive as heroin. In fact, it’s an outright lie.

In reality, cigarettes are merely a habit rather than an addiction. Let’s put this into a different perspective.

Earlier we asked you to imagine you were a company who needed to get their product in the hands of millions and to get them hooked.

One of the things to consider is how much money is being made by the tobacco industry. To put it lightly - it’s a LOT. According to statistia.com, in 2012 the industry market value in the United States was $45 BILLION dollars. In 2020, that number increased to $50 BILLION. That number looks like this: $50,000,000,000.

That’s a lot of zero’s, isn’t it? The UK and Canada are just as bad, with Canada bringing in $19.1 BILLION dollars, and the UK bringing in £9.39 BILLION pounds.

Now, consider this: According to the American Lung Association, of that $50 billion in the United States, the US government made $12.35 BILLION which they use to fund social programs for adults and children, including the Children's Health Insurance Program, CHIP.

With that said, tobacco products bring in a LOT of cash and the governments know this. So they are aware that it’s in their best interest to not completely dismantle the industry altogether.

You might be thinking, “Well they bring in that money because so many people are addicted!” Which you would be right in thinking, if you believed that nicotine and cigarettes are actually as addictive as heroin.

The problem with this line of thinking though is that it doesn’t exactly add up with what a real addiction is.

According to the National Center for Biotechnology Information, an addiction is a compulsive physiological need for and use of a habit-forming substance (like heroin or nicotine), characterized by tolerance and well-defined physiological symptoms upon withdrawal.

Did you notice that? Even the NCBI is aware that nicotine is just a habit. This is why a person can see a hypnotist ONCE and become a non-smoker. So what makes it difficult to quit? It has to be how tobacco affects the body, right?

Famous hypnotists like Freddy Jacquin and Ken Guzzo have successfully treated thousands of cigarette smokers who thought they were addicted, when in reality it was just a habit. One of the best uses for hypnosis is changing beliefs and habits.

So you might be thinking “Ok, so cigarettes are habit-forming but the NCBI says they are addictive because of all the withdrawal symptoms!”

Well yes, and also no.

When you think about somebody who’s addicted to heroin or pain pills, how is it normally depicted on television, in movies, or in news stories?

Usually these people sweat profusely, are up all night throwing up, and some are unable to move without feeling physical pain all over their body. They may have convulsions that last for hours, intense psychosis, delusions, or hallucinations. Some may even die.

How many people do you know who have attempted to quit smoking or who have successfully quit smoking reported any of the above symptoms?

When a person is withdrawing from cigarettes or nicotine, most of the common complaints are an increase in nervous feelings or a change in their mood.

The difference here is how the withdrawal symptoms are perceived. Hard drugs, like heroin and opioids cause severe physical symptoms because the body becomes dependent to operate on the drug, while tobacco is completely psychological and mental.

To put it another way, when somebody is physically addicted to a substance, they will often wake up in the middle of the night seeking the substance to stop the physical withdrawal symptoms. They will stay up for days on end looking for “a fix”.

How many cigarette smokers do you know who wake up in the middle of the night because they absolutely need their nicotine fix?

Again, the answer here is zero.

So why do people think they are addicted and can’t quit tobacco?

Because they believe they can’t quit. They mentally set themselves up for failure and it’s quite easy to do so. If you have billboards, the government, and the side of your carton of cigarettes telling you, “THIS SUBSTANCE IS HIGHLY ADDICTIVE” then you might really find yourself with the mindset of belief that it’s impossible.

The difference though that you’ve just discovered, is that tobacco isn’t physically addictive (meaning a person’s body doesn’t depend on it to keep functioning) and instead it’s just habit-forming.

The mood adjustments people experience, like irritation or feelings of anxiousness, are an adjustment to a new lifestyle and letting go of old habits. Anytime there is a change to life-style, irritations and mood changes are expected.

If you tell somebody who’s overweight that they need to go on a diet and lifestyle change, you can expect them to be upset with these new changes, because you are asking them to end their habit-formed addiction to a less-than-ideal lifestyle and diet change.

Just like stopping cigarettes or tobacco, you also won’t find somebody who’s changed their food habits staying up all night hoping to get a “fix” for chocolate. (Although we will admit, chocolate is that delicious!)

Habits can be hard to break consciously, which is why hypnosis is incredibly powerful. With hypnosis you are accessing the unconscious mind, which is where belief and habit are stored like a computer program that runs without your knowledge.

Once you access the program that’s running and make changes, then it becomes really easy to make the choice to stop smoking forever.

By now you’ve got a chance to see some of the differences when it comes to addiction between tobacco and other substances.

So the question then becomes, as a hypnotist, should all addictions be treated the same?

When it comes to substances though, like heroin or even alcohol, the problem with treating these addictions are the safety and security of the subject.

We firmly believe here at the Mike Mandel Hypnosis Academy that ecology and safety are the number one priority when working with other people. This includes entertainment hypnosis like stage or impromptu street hypnosis or working in a clinical setting.

Addictions to substances that are habit forming, like caffeine, tobacco, or even marijuana, can all be dealt with in a similar fashion. By changing the belief and habit on an unconscious level you can help a person immediately drop the habit.

Harsher substances though, like heroin, opioids, or even alcohol, have harsh physical withdrawal symptoms, because the body is now reliant on the substance to operate. Take alcohol as an example. A person who has been a heavy drinker for years and years can have severe withdrawal symptoms called delirium tremens just a few days after their last drink.

According to Healthline, this severe withdrawal symptom can include fever, hallucinations, high blood pressure, and sudden death.

Because of this, we do not recommend assisting individuals to end their addictions on your own as a hypnotist, unless you are a medical professional or have been given a referral by their primary care provider. Successful addiction treatment in our experience is when a total treatment plan has been created and established, integrating a full therapeutic alliance with medical doctors, therapy, and hypnosis.

So you’ve decided you are ready to start working with individuals to end their addiction to tobacco forever. Maybe you want to know more about habits and belief systems and how to rapidly change your own or someone else's.

If this is you, then you are going to love the Mike Mandel Hypnosis Academy. Inside this academy, you’ll discover powerful ways of accessing the unconscious mind and quickly making internal adjustments to old habits and unwanted beliefs.

For those who really want to dive deep into their inner workings, we would highly recommend our online video course, NLP Essentials, or our Personal Growth Membership.

NLP Essentials focuses on the fundamentals of communication, habits, beliefs, and provides you creative yet simple ways of making automatic changes to your life. The Personal Growth Membership includes exciting new ways of approaching a complete mind-body transformation.

So you have a few options. You are free to choose to either learn to help other people from the Mike Mandel Hypnosis Academy, improve your own life and learn some awesome mental skills with NLP Essentials, or completely change your physical body and mental wellbeing, with our Personal Growth Membership.

You’ll be satisfied with whatever choice you decide to make.