Unplanned Hypnosis Sessions and How To Carry Them

Unplanned Hypnosis Sessions and How To Carry Them

How To Pick the Best Hypnosis Audio Recordings

How To Pick the Best Hypnosis Audio Recordings

Hypnotic Language Patterns and Who Should Learn Them

Hypnotic Language Patterns and Who Should Learn Them

Hypnotic Gifts: What We Learned From Igor Ledochowski

Hypnotic Gifts: What We Learned From Igor Ledochowski

How Easy Is It To Change People With Hypnosis? 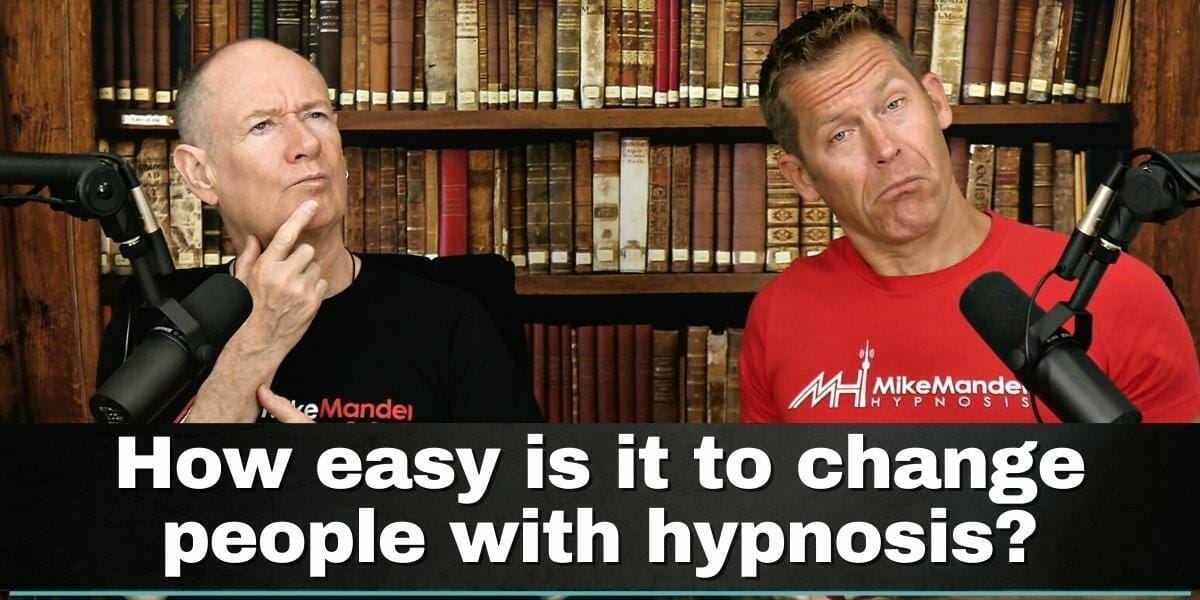 Is change really fast and easy with hypnosis? That depends on a number of factors. But it might be easier than you think!

In order to answer the question, the first thing we must take into account is context.

Change which person, in what way? And are they willing or unwilling to experience change? Context really governs everything when doing hypnosis, and one aspect of context is called threshold.

Threshold is a concept that all good therapists need to know about. When a client is at threshold, change is often simple and occurs rapidly; even instantly, in some cases. On the other hand, without a person being at threshold, change can be difficult, or even impossible.

So how do we know if someone’s at threshold?

A person’s at threshold if they can congruently express these three conditions:

In other words, the client must realize that change is absolutely necessary, it must occur without further delay, and the client takes full responsibility for the change to happen. This means that the client is willing to follow the hypnotist's instructions, including any recommended homework.

Without this sort of total commitment, there will be no lasting change through ANY therapy; not just hypnosis. A person may come into a hypnotist's office and be very congruent about wanting to change in some area of life. Perhaps the client wants to quit smoking, since he has family members who’ve died from lung cancer. He might make a passionate and emotionally convincing case for quitting, and takes full responsibility for that decision.

But when the hypnotist asks if he’s willing to quit RIGHT NOW, that’s when things change. The client shifts around in his chair, and says he can’t quit just yet, because he still has half a carton of cigarettes at home, and it would be wrong to waste them…

Clearly, this person is not at threshold, because although he’s good at selling the hypnotist the story that he wants to quit, he’s just not ready to do so. Not yet.

We sometimes see the same problem with a person who wants to change some behaviour, but only because his spouse wants him to change. But in reality, if you aren’t changing for YOU, then you might only want to get someone off your back, and that’s NOT being at threshold.

So, threshold is not just important. It’s CRUCIAL, in order for a hypnotist to produce real, and lasting change.

Other Aspects of Change

It should also be mentioned that change has to be not just possible, but also reasonable.

Let’s say a man hired a hypnotist to help him be consistent in healthy eating, and exercising regularly. That all sounds great, and is certainly possible. But if he then puts a condition on the change, and says that he wants to never eat pizza or fast food again, for the rest of his life. He goes on to say that he wants to lose ten pounds of fat per week, too.

No hypnotist in her right mind would accept this person as a client, no matter how much he offered to pay her. Not only is the requested change unreasonable, it borders on being impossible too!

It goes without saying (although I am saying it) that the skill level of the consulting hypnotist must be at least adequate. Hypnosis is a largely unregulated profession, which means that in many areas of the world, a hypnotist can hang out his shingle, with little or no training.

Hypnotists range from complete beginners who’ve read a book or taken a weekend course, to professional psychologists and psychiatrists, who’ve received more than adequate training. The bottom line is, what training and credibility does a hypnotist bring to the consultation room? It’s always good to check.

It’s the same when hiring anyone, from architects, to personal chefs, to martial arts instructors. In order to get the result you’re paying for, you must hire someone who has the requisite skill sets, a solid track record, and sufficient experience to proceed efficiently.

This is where comprehensive hypnosis training is vital. Afterall, would you seek out a medical doctor or a lawyer, who finished at the bottom of his class? Probably not.

A skilled hypnotist will be able to accurately evaluate the needs of a potential client. She’ll also know when she’s out of her depth, and will send the client elsewhere for treatment.

A properly trained hypnotist or hypnotherapist will be able to do comprehensive changework, from erasing a phobia or easing anxiety, to reducing chronic pain. She’ll also have the skills to do generative change, which is improving something, like sports performance or public speaking.

A final point to be made is the necessity of creating a sufficiently deep trance, which any good hypnotist should have no difficulty with. Technically, this fits under the category of hypnotic skill, but is important enough to have its own heading.

A somnambulistic trance is best described as the working state of hypnosis. It’s the hypnotic depth you’re aiming at in every session. It’s also the level that most stage hypnotists strive for, in order to produce a hilariously entertaining show.

Somnambulism is essential for regression work, and also for accessing some of the subpersonalities that lurk below the surface of conscious awareness. It’s the depth a client must reach, in order to create and use post-hypnotic suggestions effectively.

So it’s easy to change someone with hypnosis … sometimes.

Although technically, the hypnotist doesn’t “change” anyone. She only facilitates the subject running various processes, and making the necessary changes himself.

As we have seen, there are a number of considerations that must be taken into account, threshold being vitally important. And we’ve also seen that changework expectations must be reasonable rather than outlandish. Likewise, there must be an adequately deep trance to access the subject’s unconscious resources.

But if all the conditions are met, and a subject at threshold connects with a sufficiently skilled, and well-trained hypnotist, the results may well be astounding.

If you wish to learn how to do all this stuff yourself, check out the Mike Mandel Hypnosis Academy. You can start with a 14-day free trial right now.